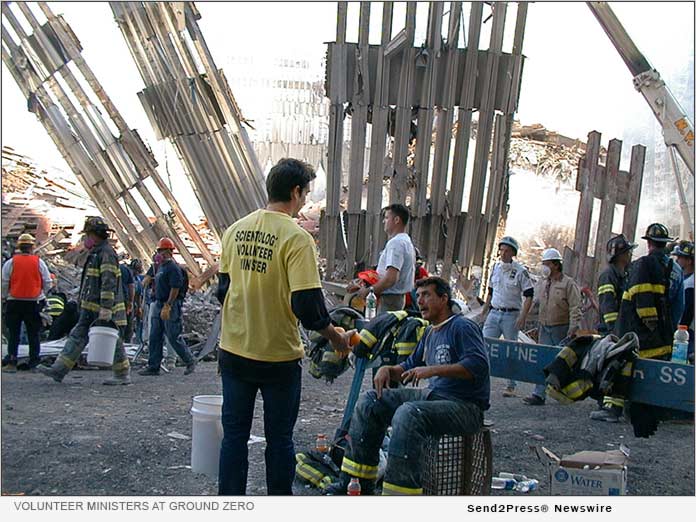 (NEW YORK, N.Y.) — NEWS: Saturday marks the 20th anniversary of the 9/11 attacks on the World Trade Center in New York. The Church of Scientology International honors the rescue workers and the Scientology Volunteer Ministers who served them. The unsung heroes who responded to the attacks at Ground Zero 20 years ago on September 11 brought hope and renewed belief at a time when an affirmation of the basic goodness of Mankind was sorely needed.

“As any New Yorker would tell you,” said one of the first Volunteer Ministers to arrive on the scene, “to see the Twin Towers disintegrate was a living nightmare. Over 25,000 people were gotten out of the towers because of the work of the responders, civilians who were fire wardens for their floor, strangers assisting others out to safety, police, firefighters, emergency medical services responders, and those who made the ultimate sacrifice that day in service to others.”

Scientologists from across New York and New Jersey immediately headed for the Church of Scientology New York, just off Times Square on West 46th Street. The Church soon became the communications and logistics hub of the Church’s relief efforts. Over the next nine months, some 800 Scientologists from across the United States and abroad served at “the pit” to help rescue workers contend with the gruesome and hazardous conditions.

“We were under the pile, we were on top of it,” said a retired New York City firefighter who served at Ground Zero. “We were chest-deep in muck.” He recalls how the Volunteer Ministers were always there when they finished a shift. “We would come out of there. There was a whole support group on the outskirts of the pile. It made you feel good to know they were out there when you were going to come out of that hole.”

Volunteer Ministers provided food, water, clothing, gear and other necessities to the cleanup crews. For nine months they continued to serve until all that remained of the World Trade Center was a cavernous pit.

“We kind of get a lot of the credit,” said a New York City Police officer, “but I think a lot of the credit has to go to the people on the outskirts such as the Scientology volunteers and such that provided us with comfort while we were down there at a time when we needed it probably more than most people understand or realize.”

At the 2001 celebration of the founding of the International Association of Scientologists (IAS) in October, Scientology ecclesiastical leader Mr. David Miscavige spoke of the impact of the Church of Scientology of New York as headquarters of the Ground Zero effort. “With their recent actions and the compassion they have shown they now have a prominence greater than ever before.” He announced that the IAS would be funding the full top-to-bottom restoration of the New York Church “in appreciation for their being there to help the city when it counted.”

Three years later, in September 2004, dedicating the new Church of Scientology of New York, Mr. Miscavige reiterated the importance of what New York Scientologists inspired across the rest of the world three years earlier: “For in the darkest of times and worst of places, you stood tall amongst it all as a shining beacon of light,” serving as a living example of the motto of the Scientology Volunteer Minister: “Something can be done about it.”

The Church of Scientology Volunteer Ministers program is a religious social service created in the mid-1970s by Scientology Founder L. Ron Hubbard.

A Volunteer Minister’s mandate is to be “a person who helps his fellow man on a volunteer basis by restoring truth and spiritual values to the lives of others.” Their creed: “A Volunteer Minister does not shut his eyes to the pain, evil and injustice of existence. Rather, he is trained to handle these things and help others achieve relief from them and new personal strength as well.”

*Caption: Scientology Volunteer Ministers at Ground Zero New York in the wake of the 9/11 terrorist attacks.