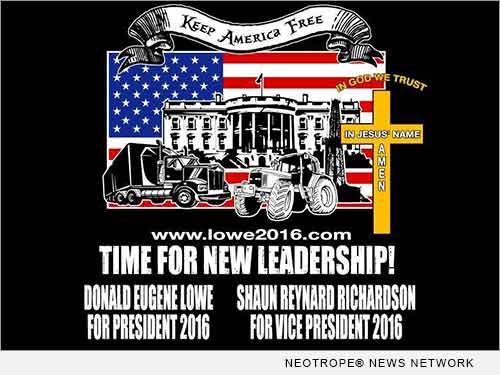 SAN ANGELO, Texas — Donald Eugene Lowe is officially announcing that he will be the challenger at the Republican convention in the nomination bid for the White House. “It’s been done before and it can be done again,” Lowe says.

Lowe recalls that at the 1880 Republican National Convention that when Secretary of the Treasury, John Sherman, Ulysses S. Grant or James G. Blaine could get enough votes to secure the nomination, delegates chose James A. Garfield as a compromise on the 36th ballot.

“I’m giving voters a choice too,” Lowe says. “I’m challenging Trump and am ready for all that comes next. Trump is no longer the presumptive nominee.”

Lowe says that he has dreamed of running for president since he was seven. He believes, the time is now right.

He insists that if Americans are seeking a president who will work for them, he’s your man.

Lowe was raised on welfare. His mother was physically and mentally disabled. His grandparents helped to bring him up. His upbringing was not easy and he witnessed what havoc drugs could bring to his family which resulted in the death of a sibling.

He is a self-proclaimed inventor and forward thinker. He has a passion for helping others and is asking U.S. citizens to vote for him in the November 2016 election.

Among Lowe’s political positions, he believes in the right to bear arms, is a supporter of capital punishment, is actively fighting in the war against drugs and hopes to see a 40 percent reduction in foreign oil use over the course of the next three years.

DISCLAIMER: This press release is paid for by Donald Eugene Lowe, the Republican.