TEMPE, Ariz. — The rocky economy has affected many areas of the market, but one area that has not been slapped in the face by the United State’s financial crisis is energy shots, says STG Media Corp. The energy beverage category has grown over 260% in the past 3 years and is expected to grow another 15% in the years that follow. Consumers are finding themselves working longer and sleeping less to help compensate for the rising gas prices, the plummeting stock market, and the rocky real estate market. Reaching for an energy beverage, just to make it through the day has become a routine activity for many consumers in the working class. 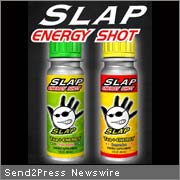 The difference between this energy shot and the other energy shots on the market is that Slap Energy Shots is tea based and does not have the jolt and crash effect.

“We have a tremendous amount of success in the convenience store channel, simply by ensuring that the products that we put in the market have adequate media support behind them,” President of STG Media Corp. and Global Distribution Services, Vincent M. Schuman said. “Due to the economy, many of our main competitors are slashing their marketing budgets; we are going to use this as our advantage to make Slap Energy Shots really stand out in the energy shot category.”

For more information about the STG family of companies, call toll-free: 866-834-4370 or visit our website pr.printad.info/21.