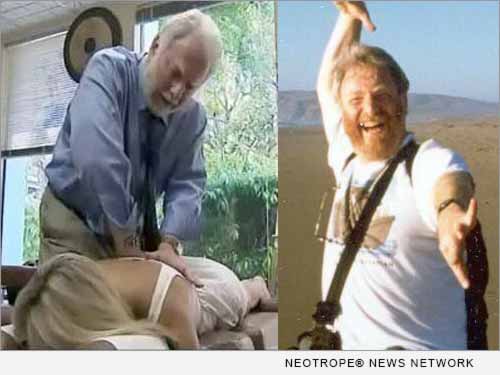 CORTE MADERA, Calif. /eNewsChannels/ — NEWS: Dr. Don Harte, Calif. chiropractor, charges the media with “an evil bigotry.” He says, “The mass media refuses to acknowledge the existence of vaccine-injured children. This is quite a trick, since we are talking millions of children.”

Recently, on Friday, July 3, 2015, there was a demonstration at the Golden Gate Bridge against the recent signing of SB277, the new California law destroying both the religious and personal belief vaccine exemptions. Dr. Harte spoke to the crowd, along with others. He explained that “their whole con game relies on fear, trying to convince you that you and your children have nothing inside to protect them from all those evil germs. That you need their HOLY WATER, the vaccines, or you will die.” Once again, Harte charged the California Governor and the legislature “as Destroyers of the family, as Enemies of liberty, as CHEMICAL CHILD MOLESTERS.”

One of the other speakers at the rally was Mr. Josh Coleman, of Roseville, California. Dr. Harte notes, “His son, Otto, who was paralyzed by a vaccine reaction, was there, in his wheelchair; as were other vaccine-damaged children. Some participants held up photos of their children who had died from vaccines.” An infuriated Dr. Harte said, “There were no photos of these children, nor any mention of them in news accounts. Establishment media refuses to put a human face on the suffering caused by vaccinations. I don’t know whether to call them ‘chicken’ or ‘evil.'”

“The child who did appear, prominently, in the news accounts,” Dr. Harte notes, “was not at the July 3rd event. He is Rhett Krawitt, a 7 year old boy with leukemia, who has become the poster boy in support of SB277. The goal of those who have been coaching him was to incite fear and hatred of non-vaccinated children, and of their parents.” The claim has been that Rhett’s health would be threatened, since he cannot be vaccinated because he is “immune-compromised.” “Really?” Dr. Harte asks. “The claim that non-vaccinated children are a threat to Rhett has ZERO scientific basis. First of all, less-vaccinated and non-vaccinated kids tend to be healthier. And more specifically, children recently vaccinated with live virus vaccines will shed viruses, and thus, be contagious, for up to 28 days.”

Dr. Harte speculates, “Perhaps Rhett Krawitt is a victim. Perhaps vaccines that he had had earlier in his life may have damaged his immune and blood systems enough to have caused his leukemia. Perhaps his family is looking in the wrong direction for a villain.”

“Here we have a case,” explains Dr. Harte, “of one boy held up as a potential victim of unvaccinated or less-vaccinated children, who has had, in reality, no harm done by those children. The millions of children who have endured great harm, up to and including paralysis and death, are ignored. This is not science, nor is it reputable news reporting nor reputable public policy. It is naked propaganda, paid for by Big Pharma.”

Dr. Don Harte, former medical student, is a straight chiropractor serving Marin and the Greater Bay Area since 1981. He is an activist in the struggle for free speech for chiropractors. Dr. Harte was named 2006 “Chiropractor of the Year” by the World Chiropractic Alliance (WCA). He has served on the Boards of the WCA and the Council on Chiropractic Practice. His articles have been published in OMNI magazine, San Francisco Chronicle, Chiropractic Journal and Journal of the California Chiropractic Association.