LOS ANGELES, Calif. — Craig Rubin, candidate for mayor in the City of Los Angeles, is certainly happy that Michael Phelps is not going to be prosecuted, but is still organizing an international boycott against Kellogg’s. He is even happier that marijuana seems to be the subject d’jour the month before the L.A. Mayoral election. Rubin, who recently has become a fixture on Los Angeles television and radio, is the off-beat candidate challenging the current mayor in “The City of Angels.” As can be seen on his appearance on the number one rated morning show in Southern California, “Good Day L.A.” starring Steve Edwards, Dorothy Lucey and Jillian Barberie where the focus seemed to drift like smoke toward the cannabis plant. 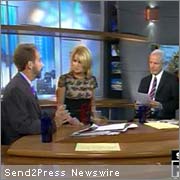 “Finally, pot is getting more coverage than gay marriage. Marijuana affects more people than gay marriage as can be seen by the recent arrest of Michael Phelps’ friends in South Carolina,” Rubin quipped at a recent public event.

“I am going to win. The mayor is afraid to debate me and he is acting as if he has no challenger,” says Rubin.

On Good Day L.A., both Dorothy and Jillian seemed to support the candidate and his message. Edwards, however, said to Rubin, “You don’t stand a chance, so is your point to get a message about pot out there?”

Rubin disputed the assertion and referred to the Biblical King David who, as a young man, defeated Goliath the Philistine giant who taunted the enemy by bad-mouthing their deity. Young David gathered five smooth stones and with his sling in the name of the Lord killed the giant. “I too have five smooth stones and my faith in God’s ability to guide me to victory.”

At the link below Rubin can be seen on Fox News’ Good Day L.A. and with entertainment reporter Lisa Breckenridge.

The candidate has pledged to protect medical marijuana clubs when elected mayor of the city. “I always knew we could win if medical marijuana could pass, but now we are beginning to see others who believe in my candidacy too. I think we are going to shock the mayor,” say Rubin.

The candidate is urging people to watch the video, visit his web site (CraigX4Mayor.org) and contribute to his campaign. “Every little bit helps. With only 10-percent of the people showing up to vote, even prayers are helpful to me. You can hear me on KPCC with Patt Morrison tomorrow, too, and on NBC,” the candidate added, doing his best to promote his campaign. “Just use Google!”

No endorsement by any news agency is claimed or implied.