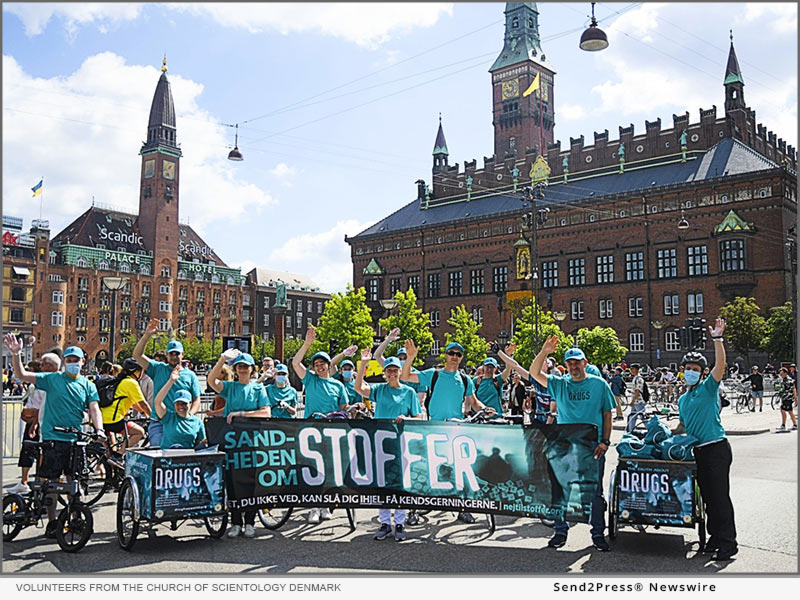 (COPENHAGEN, Denmark) — NEWS: Volunteers from the Church of Scientology of Denmark share the Truth About Drugs, raising awareness on the danger of drugs including overdose, the subject of International Drug Overdose Awareness Day, August 31.

Passionate about helping youth avoid the tragedy of drug abuse and addiction and the growing crisis of overdose deaths, Scientologists of Copenhagen take action with drug prevention.

For example, volunteers from the Church of Scientology Denmark brought their Truth About Drugs initiative to the kick-off of this year’s Tour de France in Copenhagen, Denmark.

Through his research into the mind, spirit and life, Scientology Founder L. Ron Hubbard found drugs to be “the single most destructive element present in our current culture.” And to take effective action against the damage of drugs to the individual and society, the Church of Scientology of Denmark sponsors a chapter of Foundation for a Drug-Free World.

Using the Foundation’s Truth About Drugs initiative, volunteers educate youth and adults on what drugs are and what they do.

So earlier this summer, when the Tour de France held its initial stage or “Grand Départ” in Copenhagen, volunteers in their signature teal Truth About Drugs T-shirts joined fans gathered to give a send-off to the team, whose Jonas Vingegaard brought home the yellow jersey of the Tour’s overall champion-the first Dane to achieve this honor since 1996.

Copenhagen is known as the world’s most bicycle-friendly city, and the anti-drug cyclists from the Church of Scientology were perfectly at home with their banner and booklets, riding through the city to promote the truth about drugs.

Drug prevention has long been recognized as a vital service to communities, but never more than now, in light of drug overdose trends. The UN Office on Drugs and Crime states, “Prevention strategies based on scientific evidence working with families, schools, and communities can ensure that children and youth, especially the most marginalized and poor, grow and stay healthy and safe into adulthood and old age. For every dollar spent on prevention, at least ten can be saved in future health, social and crime costs.” And the Office urges communities to “support drug abuse prevention based on scientific evidence as an investment in the wellbeing of children, adolescents, youth, families and communities.”

The Church of Scientology Denmark is an Ideal Scientology Organization, dedicated in May 2017 by Scientology ecclesiastical leader Mr. David Miscavige. It is configured to service Scientologists in their ascent to spiritual freedom and serve as a home for the entire community-a meeting ground of cooperative effort to uplift people of all denominations.

The Church of Scientology Denmark is featured in an episode of Destination Scientology on the Scientology Network, which is available at DIRECTV channel 320 and can be streamed at Scientology.tv, through mobile apps and via the Roku, Amazon Fire and Apple TV platforms.