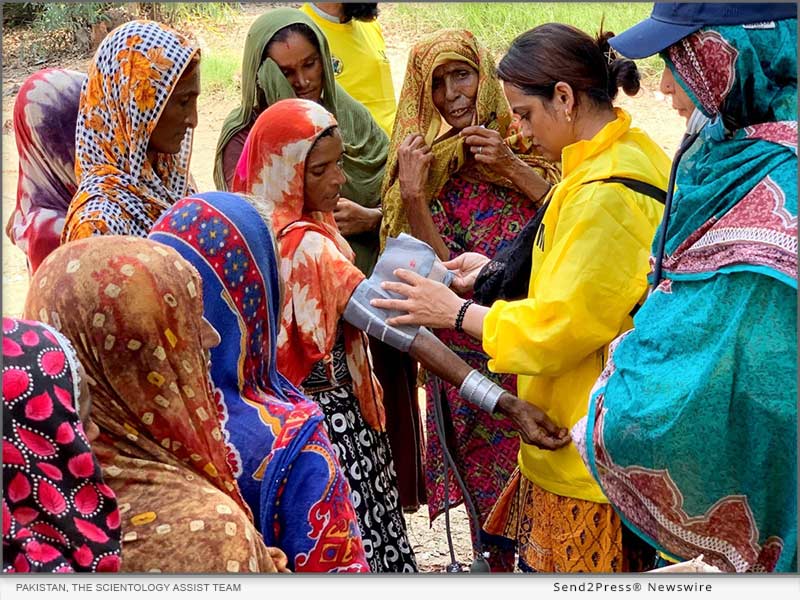 (KARACHI, Pakistan) — NEWS: In a country as prone to cataclysm and disaster as Pakistan, some might say there is not much you can count on except bad news. But Perwaiz Hasan and the Scientology Assist Team are the exception to that rule.

The team has been providing relief in the wake of disasters for more than a decade and responded immediately to this year’s floods that left a third of the country under water.

They have visited towns rarely mentioned in Western news: In Bhittai and Qasimabad, they brought food and clothing to some 500 people stranded by the flood. They brought relief to the towns of Zhob, Dadu, and Dera Ismail Khan. They have traveled across the provinces of Punjab and Sindh.

“We really felt honored to visit the most neglected province, Baluchistan,” said Perwaiz Hasan, who leads Pakistan’s Scientology Assist Team. The team was warned that the area was unsafe. “But it wasn’t true,” said Hasan. “The people in that area were very friendly and welcoming, and they were really happy we came.”

With flooding comes a host of medical complications.

“Standing water is an ideal breeding ground for mosquitoes, which are currently spreading malaria and dengue fever in Pakistan,” said Richard Brennan, regional emergency director for the eastern Mediterranean region at the World Health Organization. “Respiratory illnesses are rampant. And toxic floodwaters have caused skin infections and scabies.”

The Scientology Assist Team includes a corps of medical doctors and nurses who provide medical camps to care for those in need.

After addressing immediate physical needs, the Pakistan Volunteer Assist Team provides Scientology assists-techniques developed by humanitarian and Scientology Founder L. Ron Hubbard that address the emotional and spiritual factors in stress and trauma. And they share the Scientology Tools for Life, a series of online films and courses that provide skills to help people overcome difficulties and better their circumstances.

In 2012, the International Association of Scientologists awarded Hasan the Freedom Medal, presented to Scientologists for stellar accomplishments in forwarding the dignity and freedom of all humankind, thus furthering the Church’s humanitarian objectives.

The Church of Scientology Volunteer Ministers program is a religious social service created in the mid-1970s by Scientology Founder L. Ron Hubbard. It constitutes one of the world’s largest independent relief forces. Scientology ecclesiastical leader Mr. David Miscavige, calling on Scientologists to use what they know to redouble their efforts to aid their fellow man, has inspired tremendous growth in the Volunteer Ministers movement.

A Volunteer Minister’s mandate is to be “a person who helps his fellow man on a volunteer basis by restoring purpose, truth and spiritual values to the lives of others.” Their creed: “A Volunteer Minister does not shut his eyes to the pain, evil and injustice of existence. Rather, he is trained to handle these things and help others achieve relief from them and new personal strength as well.”

Their motto is no matter the circumstances, “Something can be done about it.”

For more information on the technology used by the Volunteer Minister, watch Scientology Tools for Life on the Scientology Network at DIRECTV 320 or at www.Scientology.tv.

International Volunteer Day 2022: Honoring a Scientology Volunteer Minister Who is Changing the Face of Uganda Nov 29, 2022

Scientology Volunteer Assist Teams Are There For Pakistan Flood Victims in Need of Care Sep 15, 2022