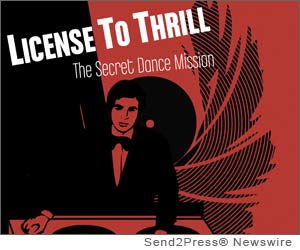 LOS ANGELES, Calif. (SEND2PRESS NEWSWIRE) — The explosions you hear on “License to Thrill: The Secret Dance Mission” are all of the sonic variety. In this new collection of EDM (Electronic Dance Music), the dozen recordings use no drones, no bombs, and no weaponry other than keyboards, guitars, drums, and turntables. “This is EDM that shakes hips and thumps your chest,” notes producer and co-writer Peter Roberts speaking about the songs that are now being offered to DJs in clubs around the globe.

Boosted by the record-breaking box-office returns of the most recent James Bond 007 film, “Skyfall,” the new tracks take the iconic songs from many great Bond movies and present them in hard-charging, electrifying, and high-energy versions. “We’re seeing club dance floors really fill up when these tracks are unleashed through a big sound system,” Roberts states.

Performers on “License to Thrill: The Secret Dance Mission” include such international dance music hit-makers as Jesschelle, Lisa Frazier, Vann, Charly, Aleesha, and Pepper MaShay. Songs include “Live and Let Die,” “All Time High,” “Diamonds are Forever,” “A View to a Kill,” “Thunderball,” and “Moonraker.”

Peter Roberts is a multiple award winning and five-time Grammy award nominated songwriter and producer (his Grammy noms were for “Song of the Year,” “Album Of The Year,” “Record Of The Year,” “Best Song written for a Motion Picture Soundtrack,” and “Best Female Pop Vocal Performance.”) Classically trained, Roberts is a multi-instrumentalist, arranger and programmer whose successes have come in such genres as EDM, R&B, Pop, Rock, Classical, Hip Hop, Latin, Ethnic and Smooth Jazz.

To preview tracks from “The Secret Dance Mission,” visit License to Thrill online at http://www.licensetothrill-music.com where you can also find photos and bios of the performers.

“License to Thrill: The Secret Dance Mission” is released by BDM Records, an indie label located in Studio City, California, and all 12 songs in the collection are available worldwide via digital download through iTunes, Amazon, Napster, eMusic, Zune, Shockhound, Spotify, Thumbplay, Medianet, and many other online music distribution services.