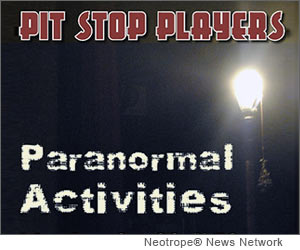 NEW YORK, N.Y. /eNewsChannels/ — The Pit Stop Players, a fourteen-member instrumental ensemble composed of veteran Broadway pit musicians, launch their fourth season with a concert of creepy classics and petrifying premieres at the DiMenna Center for Classical Music on Monday, October 29 at 7:30 p.m.

Founder and music director Joshua Rosenblum says, “This is a collection of great scary music you’ve never heard, except for one piece you’ve definitely heard, but never knew what it was. Plus, the world premieres are going to be amazing.”

Composer, conductor and pianist Joshua Rosenblum has led the orchestras for thirteen Broadway and Off Broadway shows, including “Wonderful Town,” “Chitty Chitty Bang Bang,” “The Music Man,” “Miss Saigon,” and “Dr. Seuss’s How the Grinch Stole Christmas,” which returns to Madison Square Garden this fall. He is also the composer/creator of “Bush is Bad”, the hit Off Broadway satirical revue, and the composer/co-lyricist of “Fermat’s Last Tango,” “Einstein’s Dreams,” “Garbo and Me,” and the forthcoming “The Haunted Hotel.” His instrumental music has been recorded on two CDs: “Impetuosities” and “Sundry Notes,” both on the Albany Records label. Rosenblum has written pieces on commission for Philip Smith, principal trumpeter of the New York Philharmonic; Ethel, America’s premiere post-classical string quartet; and the Chase Brock Experience dance troupe, among many others. He teaches Composing for Musical Theater at Yale University, his alma mater, and was recently awarded a grant from the Signature Theatre in Washington, D.C., as part of the American Musical Voices Project: The Next Generation.

Born in New York City, composer Ray Luedeke has lived at various times in Japan, in Austria, and in Canada, where he was Associate Principal Clarinet with the Toronto Symphony Orchestra. In 2010 his Odyssey ended when he returned home to NYC to devote himself full-time to composing and to promoting his music theater company, “Voice Afire Pocket Opera and Cabaret.” Recordings of his music include “Shadow Music” with the Louisville Orchestra, “The Transparency of Time” with pianist Andre LaPlante and the Winnipeg Symphony, “The Moon in the Labyrinth” and “The Lyre of Orpheus” with harpist Judy Loman and the Orford String Quartet, “Brass Quintet” with the New Mexico Brass Quintet, “Circus Music” with the Hannaford Street Silver Band, and “Ah, Matsushima!” with violin/marimba duo Jacques and Michael Israelievitch. Quartetto Gelato has recorded Ray’s brilliant arrangement of Maurice Ravel’s “Le Tombeau de Couperin” and has performed it worldwide.

Fay Wang is a composer and performer from Beijing, whose works have been performed in China, Taiwan, Thailand, Germany, Switzerland, Austria and the United States. She has received honors and awards from competitions including ASCAP Young Composer Award, China’s Golden Bell Award, Governmental Award, New Century Cup Award, and Palatino Cup. Her many commissions include the Classic Euro Young Festival, Roger Shapiro Fund, Beijing Modern Music Festivals, Beijing Chamber Music Festival, Beijing Dance Academy, and the Cantonese Song and Dance Troup. Her works have been performed by ensembles including Bang On A Can All-Stars, the RIAS Youth Orchestra (Gerd Albrecht), Sinfonia Iuventus, Yale Philharmonic, Dinosaur Annex, Ensemble De Reihe, Galatea Quartett and loadbang. Ms.Wang’s creative work spans a variety of genres, including dance, drama, musical theater, film scoring and experimental pop. In addition she has created her own unique genre, called “The Monodrama Series.” Ms. Wang also frequently performs in various styles as vocalist for other composers. Her music has been broadcast on China Central Television, Austrian National Broadcast and on “Music for Internets.”