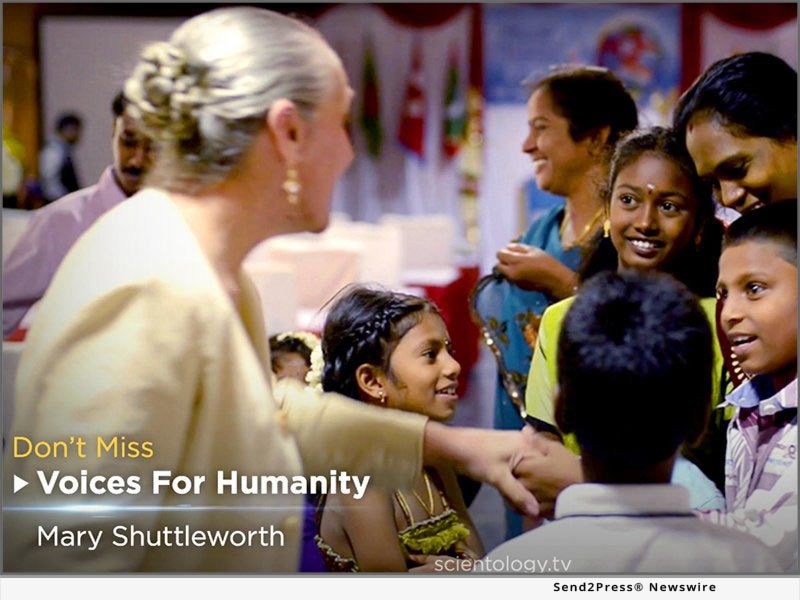 “In 2001, when we began Youth for Human Rights International, 90 percent of those surveyed were unable to name more than three of the 30 rights granted by the Universal Declaration of Human Rights,” says the organization’s founder and president Dr. Mary Shuttleworth. “Almost half the world’s population is under 25. And they are hardest hit by the world’s inequalities and injustices.”

According to the United Nations, “67 percent of people believe in a better future, with 15- to 17-year-olds being the most optimistic about this.”

Youth for Human Rights educational materials empower youth to accomplish the future they envision. Inspired by L. Ron Hubbard’s belief that “human rights must be made a fact, not an idealistic dream,” the Church of Scientology and Scientologists support Youth for Human Rights and make these materials available to educators, law enforcement, nonprofits and community leaders free of charge.

“Voices for Humanity,” an original series on the Scientology Network, documents how human rights advocates are creating positive change using the Youth for Human Rights initiative.

* Two decades after the end of a civil war that claimed 200,000 lives, the people of Guatemala still struggle with the human rights abuses committed by their military. Coming of age in the aftermath of such destruction, Cynthia Guerra committed herself to right those wrongs. Today, as president of Youth for Human Rights Guatemala, she leads a nationwide program to educate civilians, police and the military on human rights.

* For over two decades, the people of The Gambia suffered under a brutal dictatorship. Nfamara Jawneh spread the message of human rights, a campaign now credited with helping usher in a new era of democracy in the country. Partnering with Youth for Human Rights, Jawneh continues to work tirelessly across The Gambia and internationally, training and educating tens of thousands of students on their human rights.

* Sheena Chohan is a well-known Bollywood actress and TV personality. In press interviews, as a television host of the Bangladesh Premier Cricket League, and every chance she gets, she reaches millions with her message of the importance of knowing human rights to make South Asia a safer place for everyone.

Fundamental to Scientology is a humanitarian mission that extends to some 200 nations with programs for human rights, human decency, literacy, morality, drug prevention and disaster relief. “Voices for Humanity” is a series of short documentaries introducing changemakers of all faiths, cultures and nations who extend help to their communities through Scientology-sponsored humanitarian programs.

Youth for Human Rights Costa Rica: How One Man Helps Imbue His Country with a Culture of Human Rights Jan 13, 2022