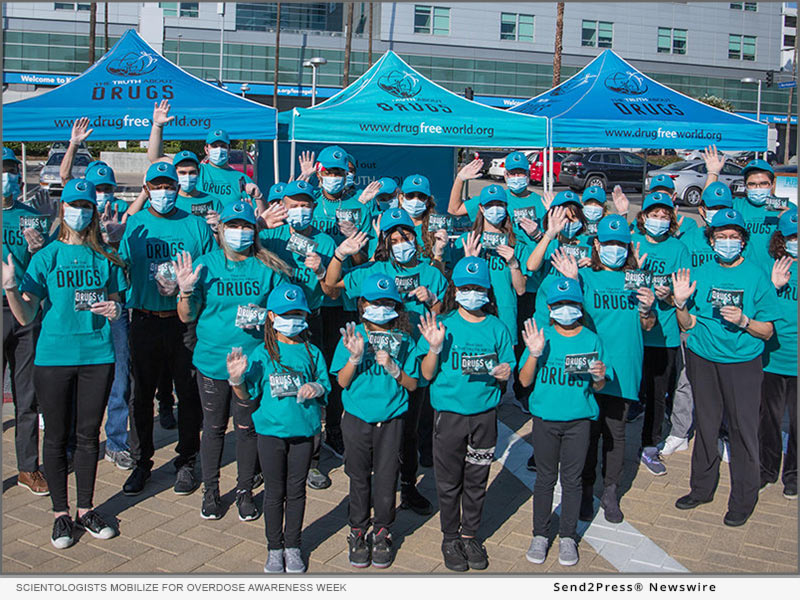 (LOS ANGELES, Calif.) — NEWS: Volunteers from Scientology Churches, Missions and groups fight drug overdose during Overdose Awareness Week and throughout the year with the truth – The Truth About Drugs initiative of Foundation for a Drug-Free World.

The spike in drug overdose deaths makes it more urgent than ever to warn young people about the dangers of drugs. This is a danger that has escalated over recent years, with drug dealers secretly adding fentanyl and other highly dangerous additives to the drugs they sell.

On Friday, U.S. President Joe Biden issued a proclamation declaring August 28 through September 3 as Overdose Awareness Week. “Beating the opioid overdose epidemic is an urgent priority,” he said. And he urged one and all to strengthen collective efforts to prevent overdose deaths.

Foundation for a Drug-Free World stands ready to help anyone join the movement to protect youth from the dangers of drugs. Thanks to the support of the Church of Scientology and Scientologists, the Foundation, one of the world’s largest nongovernmental drug education and prevention campaigns, makes its youth-friendly booklets and videos available free of charge.

Foundation for a Drug-Free Word also features free online drug education courses that dispel pro-drug propaganda and help youth understand what drugs are and what they do.

Scientology Churches hold community open house events and offer free training and materials to anyone wishing to take part in this movement to help youth.

The Scientology Network shows humanitarians in action using The Truth About Drugs to help kids avoid the tragedy of drug abuse. Episodes of the original series Voices for Humanity document their work and the effectiveness of the program:

* David Sanchez was only 9 when a neighbor offered him marijuana and started him on a lifelong struggle with drug addiction. By the time he turned 15, his life was consumed by alcohol and methamphetamine, leading to a stint in juvenile jail. Graduating to heroin and time in multiple penitentiaries, the turning point came in 2012 when he finally conquered his addiction. In 2014, Sanchez cofounded Beacon of Hope, the largest adult sober living home in Los Angeles. Remembering how his nightmare began with that first hit, he founded Strike Out Against Drugs to educate his community on the truth about drugs using Foundation for a Drug-Free World materials. To date, David Sanchez has reached around 1.5 million people with an anti-drug message and changed the lives of countless kids.

* As a teenager, Darren Tessitore watched as drugs claimed the lives of many of his friends. Now the father of three dedicates himself to educating as many kids as possible on the dangers of drugs and delivers his anti-drug message to millions. Convinced that his close friends who died drug-related deaths might be alive today if they had been fully aware of the dangers drugs posed, Tessitore dedicated himself to teaching kids about the dangers of drugs as a preventative measure. He discovered Foundation for a Drug-Free World’s Truth About Drugs program and advocated its use-first in high school driver’s education programs. Schools across the country heard of his success and began clamoring for the materials and information he presented. Then he partnered with police-affiliated school resource officers. Through seminars, presentations and the educational materials he has distributed, Tessitore has reached an estimated 3.1 million students with the truth about drugs.

* Michael DeLeon’s world came to a crashing halt when he suddenly found himself addicted to drugs and in prison. Once released, he founded the nonprofit Steered Straight and dedicated himself to helping kids by sharing his own story and educating them on the dangers of drugs. In his Voices for Humanity episode, DeLeon describes how he was searching for a way to get through to kids. He googled “drugs are a lie” and a Drug-Free World video popped up. “Man, I could almost cry,” he says, and he realized “this is it!” This was exactly what he needed. The #1 booked drug prevention lecturer in U.S. schools, he uses the Drug-Free World materials in all his presentations.

Drug prevention has long been recognized as a vital service to communities, but never more than now, in light of drug overdose trends.

The UN Office on Drugs and Crime states: “Prevention strategies based on scientific evidence working with families, schools, and communities can ensure that children and youth, especially the most marginalized and poor, grow and stay healthy and safe into adulthood and old age. For every dollar spent on prevention, at least ten can be saved in future health, social and crime costs.” And the Office urges communities to “support drug abuse prevention based on scientific evidence as an investment in the wellbeing of children, adolescents, youth, families and communities.”

The Church of Scientology and Scientologists reach out to their communities during Overdose Awareness Week and throughout the year with the Foundation’s The Truth About Drugs series of fourteen illustrated drug information booklets containing facts about the most commonly abused drugs.