NEW YORK, N.Y. — ForeclosureListings.com statistics suggest some improvement in the housing market, but the good news for homeowners might be just a temporary setback for real estate investors searching for a good deal. Decreases in the number of foreclosure filings in each state and increases in prices in many of those same states seem to suggest good news, although the news is still mixed in some parts of the country. In five of the top markets, filings have decreased: California (down by nearly 5 percent), Michigan (down by just over 4 percent), Florida (down by 8.5 percent), Arizona (down by 9 percent), and Texas (down by more than 7 percent). 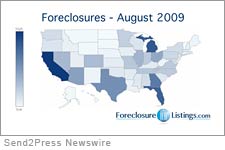 Within these and other key states, the changes in foreclosure filings in major cities also seem to be showing improvement with only a few exceptions. In Phoenix, the number of foreclosures dropped by over 8 percent, the rates in Memphis fell by nearly 12 percent, the filings in Miami toppled by just over 14 percent. Other states also saw a decrease: Atlanta (2 percent) and Houston (3.7 percent). However, both Chicago and Detroit saw their rates of foreclosure increase by less than 1 percent and by just over 5 percent, respectively.

Although fewer foreclosures can help reduce the supply of available homes on the market, the prices are also important. In four out of the five top real estate markets, prices have increased. In both California and Florida, the price increase is less than 1 percent bringing the average costs to $347,878 and $222,950, respectively. Michigan’s home prices went up by 1.4 percent to $91,614 while the prices in Texas increased by 4.8 percent to $116,016. Prices actually decreased in Georgia: falling 2.6 percent to $126,914. The lowest average price for homes, according to ForeclosureListings.com, is $60,940 in Ohio.