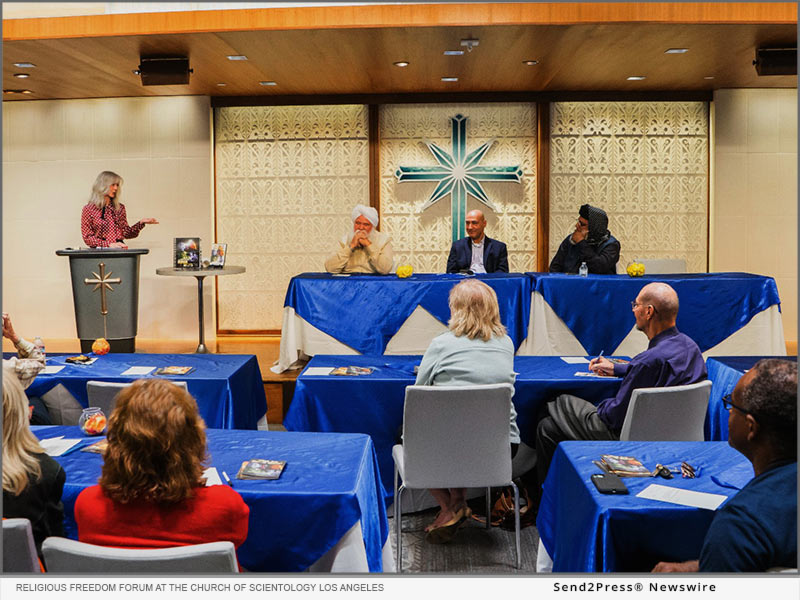 (HOLLYWOOD, Calif.) — NEWS: Religious leaders discuss the importance of tolerance in today’s world at a forum at the Church of Scientology Los Angeles. Freedom of religion or belief is often described as the “canary in the coal mine” — a metaphor for a social issue that predicts danger or disaster. With a recent Pew Research Center study finding government restrictions on religion reaching a record high worldwide, the Church of Scientology Los Angeles marked International Day of Peace with an open house and forum on the importance of tolerance for people of faith.

The program featured religious leaders of several minority faiths whose members have experienced discrimination and worse because of their beliefs.

Speakers were Mr. Shahrooz Ash, trustee of the California Zoroastrian Center and founder of Lord of Wisdom, a cultural and educational organization that promotes Zoroastrian philosophy; Shaykh Qazi Asad, Pakistani-born spiritual leader and the first Islamic chaplain in the L.A. Police Department and L.A. County Sheriff’s Department; and Professor Nirinjan Khalsa, executive director of the California Sikh Council, who has served as a commissioner on the City of Los Angeles Human Relations Commission for more than 18 years.

Each speaker described their own religious beliefs and the importance of religious freedom and tolerance to the adherents of their faiths.

According to the Center for the Study of Hate and Extremism, hate crimes in major U.S. cities rose in the first half of 2022 for the third year running.

Results of a poll conducted by the Pearson Institute and The Associated Press National Opinion Research Center for Public Affairs Research, released in October 2022, found that most Americans believe misinformation leads to extreme views including violence based on race, religion or gender.

The Church of Scientology supports United for Human Rights (UHR), a human rights education initiative based on the Universal Declaration of Human Rights. Over the past 20 years, the Church has seen countless instances of increased tolerance and decreased social conflict with the implementation of human rights education. Scientologist Kelley Pomerantz, a United for Human Rights volunteer, introduced those attending the forum to the UHR educational materials.

Scientology founder L. Ron Hubbard believed in the importance of the Universal Declaration of Human Rights and that “human rights must be made a fact, not an idealistic dream.”

In appreciation for the work of the Church of Scientology in forwarding these ideals, Mr. Ash presented the Church with a gold pin representing the Cyrus Cylinder.

A human rights documentary that is part of the United for Human Rights educational program describes the significance of the Cyrus Cylinder. After Cyrus the Great conquered Babylon in 539 B.C., he freed all slaves and proclaimed that people are free to choose their religion, a revolutionary action. These rights were enshrined in the clay cylinder that was discovered in Babylon in 1879 and now bears his name.

From its beginnings, the Church of Scientology has recognized that freedom of religion is a fundamental human right. In a world where conflicts are often traceable to intolerance of others’ religious beliefs and practices, the Church has, for more than 50 years, made the preservation of religious liberty an overriding concern.

The Church of Scientology Los Angeles is designed to provide ideal facilities for Scientologists on their ascent to higher states of spiritual freedom and to serve as a home for the entire community–a meeting ground of cooperative effort to uplift people of all denominations. It was dedicated by Scientology ecclesiastical leader Mr. David Miscavige in 2010. To learn more about the Church’s many contributions to Los Angeles, visit the new interactive timeline on the Scientology website.

The Church of Scientology Los Angeles is featured in an episode of Inside Scientology on the Scientology Network, available on DIRECTV channel 320 and streaming at Scientology.tv, through mobile apps and via the Roku, Amazon Fire and Apple TV platforms.