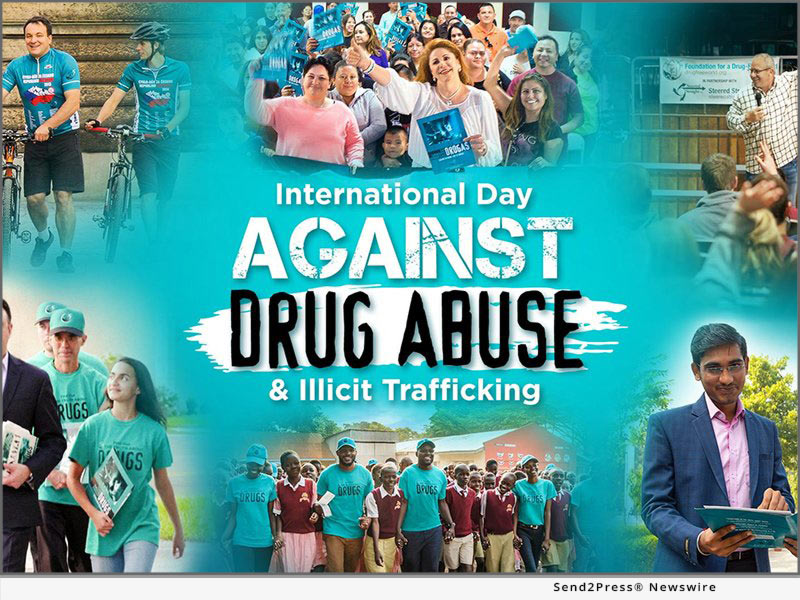 (LOS ANGELES, Calif.) — NEWS: Active in drug education and prevention throughout the year, Scientology Churches and Scientologists go all out in support of the UN’s International Day Against Drug Abuse and Illicit Trafficking.

As they do each year, Scientology Churches marked this day by organizing conferences and training programs where they introduced officials and other concerned community leaders to Foundation for a Drug-Free World’s educational materials, provided training, and coordinated actions to reach youth with effective, fact-based drug education before they become trapped in addiction.

Whether by setting up information booths in busy walking streets, organizing drug-free bike rallies and soccer tournaments, or completing a grueling 10-day 1,200-kilometers (745-mile) bicycle circuit through the Czech Republic, Scientologists pour their heart and soul into forwarding the message of the UN’s annual World Drug Day campaign.

They provide drug education lectures in schools and pull out all stops to bring concerned individuals and organizations on board to greatly expand the number of youths reached with the truth about drugs.

Noting the role substance abuse plays in the disintegration of the social fabric, Scientology Founder L. Ron Hubbard wrote, “Research has demonstrated that the single most destructive element present in our current culture is drugs.”

In the conviction that effective, fact-based drug education can help youth avoid the tragedy of drug abuse and its deadly consequences, the Church of Scientology sponsors Foundation for a Drug-Free World, the world’s largest nongovernmental drug information and prevention campaign.

Foundation for a Drug-Free World was formed in 2006 to distribute educational materials and to develop new materials to meet the challenge of continually changing drug trends. The Foundation has grown to a network of some 200 chapters around the world. The Foundation provides the Truth About Drugs secular program and materials free of charge to drug educators worldwide.

“As long as people think drugs are a matter of personal freedom and don’t see the harm in them, they are willing to try them,” says Vlastimil Špalek, chairman of Drug-Free World Czech Republic who is featured in an episode of “Voices for Humanity” on the Scientology Network. “And once they start using, they’re soon addicted. It is not good enough just to tell young people not to get involved with drugs. You have to give them a way to get the facts themselves, come to their own conclusions, and make their own decisions about whether or not to get involved.”

Anyone wishing to see just how simple and effective it is to adopt the Foundation’s drug education and prevention campaign is invited to watch episodes of “Voices for Humanity,” a Scientology Network original series of short documentaries introducing changemakers from all faiths, cultures and nations as they extend help to their communities through Scientology-sponsored humanitarian programs.

International Day Against Drug Abuse and Illicit Trafficking June 26: Scientology Churches provide tools anyone can use to help Jun 23, 2022