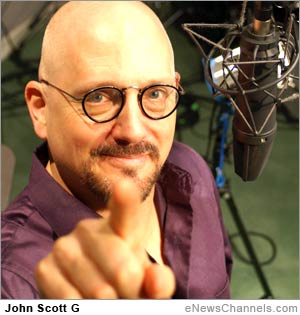 eNewsChannels Editor’s Note: this article series contains frank and mature language; if you are easily offended by other publications like Esquire, Rolling Stone, or Maxim, you probably want to stop here. If you’re not afraid of the English language, pray continue. — CLS.

“You will experience some discomfort,” was the way one healthcare professional explained things to my pregnant wife. This particular healthcare professional had not been able to enjoy the experience of labor in any sort of personal way, primarily because he was of the male persuasion, but we were sure he studied the situation thoroughly and was thus able to impartially arrive at a judicious opinion that discomfort means exactly the same thing as anguish and agony.

If you are accompanying a woman who is in labor, here is a helpful piece of advice: be sure you are holding the woman’s hand.

Allow me to explain something called an epidural, which is a word you may hear in a phrase like “Jesus Holy Christ give me the epidural!”

In an epidural, anesthesia is injected into a space in the spinal cord (called the epidural space, hence the name of the procedure). The anesthetic dulls sensation in the abdomen and pelvic area of the body. There are two conditions under which an epidural is used: one is childbirth; the other is gynecological surgery.

(Word of warning to Veronica: graphic bloody details are coming.)

Right here, we could go into a technical description of a C-section, which is short for Caesarean section (or Caesarian, or Cesarean, depending on whether my friend Stu is doing the proofreading or if it’s being done by some doofus like me). But I can’t go into a lot of detail here because the whole process of using a set of rather evil-looking tools and implements to cut through the mother’s abdomen and uterus to deliver a baby is too much like Saw or a David Cronenberg movie. My preference is to avoid films with physical violence in favor of flicks with verbal violence like Who’s Afraid of Virginia Woolf? or The Hangover or Citizen Kane.

Let’s just say that I was there for my wife’s C-section and it was pretty horrifying. In fact, it’s hard to see how anyone would ever want to endure the whole delivery room/operating theater/dungeon-of-extraction thing. But we males do not possess the magical “biological clock” that is ticking away inside most women.

The biological clock is an imaginary device that urges females to procreate. While you cannot hear it ticking, you can hear the result of each tick in such menacing phrases as “We need to talk,” “I want a baby,” and “Where is this relationship going?”

Another fun moment for any proud papa is when the gore-covered tot is offered to you to “cut the cord” and to “hold your new baby” and everything inside you is saying “why me?!” but you know that your wife is watching you through drugged-out eyes so you follow the nurse’s instructions and use the surgical scissors to slice through the umbilical cord and take the squirming baby child, still dripping and messy, into your arms.

Note to potential new dads: the dripping messiness is good practice for what’s about to become part of your life for the next couple of years.

Q: Hey, whatever happened to that wonderful collection of photographs and videos that were taken in the delivery room?

A: Hey, they were destroyed.

The moment most new moms are physically able to move around the house after coming home with the baby, they eviscerate those photos and videos. (Duh. I mean, have you seen how hideous she looked?)

Okay, so I have touched on some of the downside points about childbirth while deftly avoiding all the horrors of the nine-month gestation period. We really don’t want to go into all that. Plus, you wouldn’t want me to stoop to an act as crass and cheap as mentioning things like a pregnant woman’s hormonal surges; and the slowdown of her gastrointestinal tract leading to excess gas; and the constipation; and the hemorrhoids; and the incontinence; and the hair growth in unwanted places like breasts, belly, and face. I would never do that.

Once the baby is born, most of those problems disappear, only to be replaced with a whole new set of problems.

So now you have a new baby. A joy! A miracle! A tax deduction! That sounds cynical. And it is, but the tax credit only covers about one one-hundredth of the amount of money you are going to pour into your own personal rug rat even before that wonderful day when you hear those precious first words like “Daa” or “Muh,” which everyone will interpret as “Dad” or “Mom” but which probably means something closer to “Hey large creatures, let me pull the tail on that furry thing you guys keep calling the world’s greatest dog and which keeps sticking his cold nose in my face after licking up stuff I threw on the floor.”

Still, the creation of life is pretty spectacular, especially for two people whose only claim to fame up to that point was the ability to complete some college courses and survive fender-benders.

The raising of a child is another awesome responsibility, one for which I was singularly unqualified, as you can tell by some of my comments at various times during the process:

Later, I also said something like this: “Tell me again why a colicky baby can’t have a little whiskey. Ow.”

And I muttered this at one point: “Looks like the kid is getting more tit than I ever did. Ow.”

There were numerous “ow” sounds in our house over the next few months as the kid used a teensy bit too much force on mommy’s nipples, something that I would never ever do except when it was totally called for, like during sex. (Wait for it . . . ow!)

Doctor, Doctor, Give Me the News

Some new parents are in a quandary about finding a pediatrician (which is a Latin word meaning “doctor who is afraid to treat people larger than he is”). Not to worry because you will have lots of choices. Friends, neighbors, coworkers, mothers, sisters, mothers-in-law, aunts and more will all be more than happy to recommend a pediatrician. “He’s the best!” they will say. Which is odd. I may not be the greatest at math, but I am pretty sure not all of them can be the best.

But eventually you select a pediatrician and drag the kid into their office where you fill out several hundred pages of forms, many of which attempt to indemnify the doctor (who is officially some sort of limited liability corporation). Then you sit good-naturedly in the waiting room while a dozen slimy, smelly, shrieking miniature germ-bombs are squirming all over that too-small and seemingly unventilated room.

Finally, your name is called and you go into an exam room where you get to answer more questions while a nurse makes checkmarks on still more forms. Eventually, the doctor makes an appearance and begins to examine your little bundle of joy while asking some of the same questions you have already answered. You probably give contradictory replies because at this point you are terrified that you have not cleaned the kid well enough or you’ve left some extra safety pins in the cloth diaper. But you get through the experience and you repeat it at regular intervals as the kid grows older and bigger and you wonder whatever convinced you that you could afford to raise a child.

There are embarrassing moments over the years, such as when you bring in your precocious offspring because of unexplained headaches and the doctor uses a large tweezers to remove nine raisins and a rubber band from your kid’s ear. The nurse carefully places all the items in a see-thru plastic container that looks exactly like the evidence bags used on cop shows. (As this is being written, examples would be Law and Order, CSI, NCIS, etc., but my guess is that this type of clue-gathering is going to remain the same until some sort of digital vacuum cleaner is developed. But I digress.) You think that the evidence bag is ominously frightening but then you’re shown a cabinet where they have thoughtfully displayed dozens of Things Removed From Kids’ Ears. “This is the ear collection” the doctor says with a smile. “We have examples from other orifices, if you’re interested.”

“No thank you,” says your wife, almost exactly at the same time you are saying “Cool!” You shuffle your feet a bit, send a pleading look at the wife, and then say, “Maybe some other time.”

With each office visit, you watch as the physician assesses the size of your offspring to judge just when it’s time to throw up his hands and tell you to go find a “real person’s doctor.” Well, they phrase it a little better than that but the message comes through loud and clear, assuming you don’t have too many raisins and rubber bands in your ears.

As the parenting continues over the days and weeks and months and years, you get to experience so many great, exciting, important, and amazing Big Moments, like when you and your wife return from your first dinner date in months and the babysitter tells you that your child is now walking. “So sorry you missed it!” says the babysitter with a moderately sincere effort at faking concern about your devastation.

And those terrific, wonderful, uplifting, and astonishing moments where you aim your video camera at your child and you end up with a sequence of them deciding not to move a muscle. Not a step, not a word, not a syllable. What a continual delight it is to watch those videos! In fact, would you all be interested in seeing some of them right now?

And when the logic of mathematics suddenly makes sense to them (“Dad, why can’t my allowance be bigger?”)

And when they begin to understand their geographic place in the world (“I liked that show about the Taj Mahal, dad; why doesn’t our house look like that?”)

Best of all, you get to take part as they learn the complexities and subtleties of our beautiful and cherished English language (“Dad, what does ‘fuck’ mean?”)

“Secret Sex, A Book Alive Online,” written and lived by John Scott G, is Copr. © 2011-2012 by JSG, all rights reserved under U.S. and international copyright conventions. Commercial use in any form is forbidden without express written permission of the author. Originally published on eNewsChannels.com with permission. Credits: Book cover design: Phil Hatten.