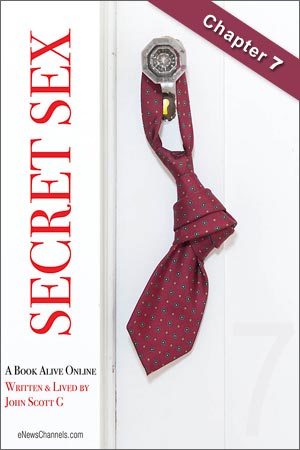 Spooky. That’s what it’s like to move into a town that hadn’t existed until the government put it there. For one thing, the entire place was what might be called utilitarian.

The total lack of any design sensibility did not seem to bother most of the engineers because they often tend to be a no-frills bunch of folks. Example: if an engineer enters his apartment and wants to hang up his coat, he’ll drill a hole in the wall and screw in a bolt-hook to avoid having to walk two steps to the hall closet.

But every now and then, someone who had once seen a Broadway show would come to town and be visually assaulted by some aspects of the place. It might be over the regimented layout of the box-shaped buildings. Or it might be about the paint . . .

“Excuse me, soldier, but what in heaven’s name do you call that particular shade of green?”

“You are looking at a prime example of official, U.S. government camouflage green.”

“Well, ‘yuck green’ is more like it. Is it everywhere?”

“The insides of the buildings are painted camouflage brown.”

“Yes, I’m quite sure they are. You know, if any color makes sense for this town, it would be the blue of the Cerenkov glow.”

“Oh, I’m sorry, soldier. Let me explain. It’s an intense and rather eerie liquid blue that’s found at the bottom of a nuclear-reactor pool. Like the ones over on the other side of the plant.”

“Sit down and keep still.”

“Listen, you back-talking whiner. Stop your complaining, you little twerp! Executive Order Alpha Zebra means we can do anything we want. You get that, bright boy?! Answer me! Do you get that?!”

“Button it, bright boy! Now, pursuant to Executive Order Alpha Zebra, it is our duty to question any suspicious activity in or around the facility.”

“What? I don’t admit anything!”

“They all say that. At first.”

“They all say that, too. Now, we’re going to ask you a few questions and you are going to give us the answers we want!”

“QUIET! Just, be quiet. Now, let’s just take it down a notch and get a little more calm. Okay?”

“You answer me this, smart boy. Just what is it that you find so wrong with the color green?”

“So you, personally, have something against the color green?”

“I just don’t like that shade of it, and not that much of it.”

“And you feel that you know better than the entire United States Army when it comes to paint? You, and you alone are qualified to judge how much of a particular kind of paint is used on U.S. government property, is that it?”

“Who else is in on this with you?”

“That’s one of the things we’re going to find out. We are not in security for nothing, bright boy.”

“That’s correct. We are in security. You have a problem with that?”

“No, no. I’m feeling a lot of insecurity right now.”

“The subject was paint.”

“I, um, I just don’t like so much of that color. Look, these handcuffs are hurting.”

“Are you a design consultant?”

“Or one of those interior decorators?”

“Have you ever given support to any group dedicated to the overthrow of the United States of America?”

“What, exactly, do you think of your fellow employees?”

“Do you even know them?”

“But you don’t think much of them, is that it? Real team player, aren’t you, smart boy.”

“Sure. And just what do you think your fellow employees think of you?”

“What do you think about that?”

“Wait, what do I think of what I think they think? Jesus!”

“Do you often take the Lord’s name in vain?”

“That’s none of your God damned business.”

“Are you on medication for these emotional outbursts?”

“We get the feeling you’re not happy here.”

“Not at the moment!”

“Let’s go into this a different way. So far, not much has happened to you.”

“I’m handcuffed to a chair!”

“Or attached any electrodes?”

“I have no wish to hurt you. The others do.”

“The ones who are watching this.”

“I gain no pleasure from causing you any pain. But the others would. They want to take you into Cell Seven. That’s soundproofed. They would like to see how you’d like being ‘dealt with.’ It isn’t pleasant.”

“Oh, I remember the last time. The mess they made.”

“But we got it cleaned up. You might not even notice when you’re dragged in there, kicking and screaming.”

“No charges were ever filed on that one. The way some of them do it, there aren’t any body parts left.”

“We want the facts, bright boy! The facts!”

“The facts about what?”

“That is exactly what we are here to find out!”

Well, okay, perhaps I have exaggerated a bit there. But anyone who has ever been questioned by security people will recognize the basic truth of that scene. Those people have no sense of humor. And they are aiming to justify their existence by finding out something about you. Anything. Even if it isn’t, strictly speaking, accurate.

Because this was a government-built town, every adult in the city had a security clearance. The schoolteachers, the guys driving the ice cream wagons, the police, the sanitation workers, the grocery clerks, the pastors, the people at the bowling alley, the waitresses, the shopkeepers. . . everyone.

It made the city very safe. And very dull. Unless you got sucked into the government security machine like the paint critic, above. In which case, things could be very exciting indeed.

“Hello, Alice. How are you today?”

“Why? Who wants to know? I have no comment. What makes you ask me that?”

“Me either. Just forget it.”

In private, there may have been mumblings and grumblings, but not out in public. This place was the very definition of a “company town.” So there wasn’t much in the way of protest about anything. In fact, in interviews or letters or phone calls or conversations with TOW (the outside world), there was a gung-ho attitude, as in “We’re so very happy here. Really!”

Sure. We were all just pleased as punch to be living in a town with the Atomic Dry Cleaners on Nuclear Avenue, and the Atomic Market over on Fifth and Argon Streets, and the Atomic Café nestled in on Proton Lane. Not to mention the Nuclear Nursery, the Atom Beauty Salon, AtomiCar Repair, AtomiCat&Dog Hospital, Atomic Elementary, and so on.

And there were a whole batch o’ folks who got on the Paranoid Parade and rode it for all it was worth: “Not only do we love it here, we believe some Senators make some very good points about watching out for Communist encroachment in our schools and in our government and in our American entertainment industry.” Which is the same attitude that helped foster the House Un-American Activities Committee and the Blacklist. And it’s not far from there to “my country, right or wrong.”

Okay, let me make two comments and then we are out of here for this chapter. First, obviously the mini-metropolis of Richland was full of extremely security-conscious people. And second. . .

“May I see your identification papers, please?”

“Secret Sex, A Book Alive Online,” written and lived by John Scott G, is Copr. © 2011 by JSG, all rights reserved under U.S. and international copyright conventions. Commercial use in any form is forbidden without express written permission of the author. Originally published on eNewsChannels.com with permission. Credits: Book cover design: Phil Hatten; Author photograph: Brian Forest.