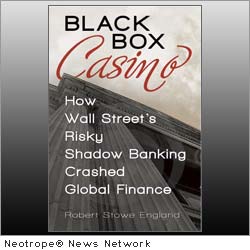 ARLINGTON, Va. /eNewsChannels/ — Remarks by “Black Box Casino” author Robert Stowe England at this month’s Mortgage Bankers Association (MBA) annual conference in Chicago detailing his exploration of how, in his words, “The story of the financial crisis is the story of mortgage banking,” have been posted on YouTube.

Timely in light of the “Occupy Wall Street” phenomenon, England’s remarks inform a topic that is at best vaguely understood even by the most financially savvy of disgruntled U.S. citizens. According to England, his determination to write “Black Box Casino” was prompted by his personal intrigue with “a monumental mystery that needed to be investigated and explained.”

“When I began writing about the mortgage industry back in 1988, I found it to be a fascinating, tough industry in which free markets corrected and regulated the business,” he explained, adding that he first met former Countrywide founder and CEO Angelo Mozillo the same year, conducting a wide-ranging, seven-hour interview.

Two decades later, when he started work on his book in 2008, England said “the fastest way to hear a dial tone was to call a Wall Street firm and ask about subprime CDOs.”

An excerpt from England’s remarks during the event at the mortgage banking conference follows:

“I wanted to tell a story of financial wreckage on an epic scale. To even describe the level of destruction that occurred is a helpful exercise given that those details were often hard to come by and occurred out of the public eye. ‘Black Box Casino’ is the story about the half of the world of banking that is shadow banking. It is the story about how huge swathes of that shadow banking financial activity moved into black boxes where outside eyes could not see what risks were being created and how multi-billion dollar bets were being placed that markets would fail and reap the speculators’ unprecedented fortunes.

Nor could people understand the level of fraud that was being concocted in some of those black boxes. We would later learn that major institutions like Lehman Brothers filed public disclosures that had massive manipulations of accounting to camouflage sky high leverage. In theory, securitization was supposed to spread risk and thus make the financial systems safe and sound.

In practice, it was a different story at least in the case of riskier mortgages. Instead of spreading small amounts of risk around the globe through the use of naked credit default swaps, risks were magnified many times and then spread around the world, creating a greater risk than would have existed if the loans had never been securitized and bets not placed against them … a shell game of ‘hide the toxic assets.'”