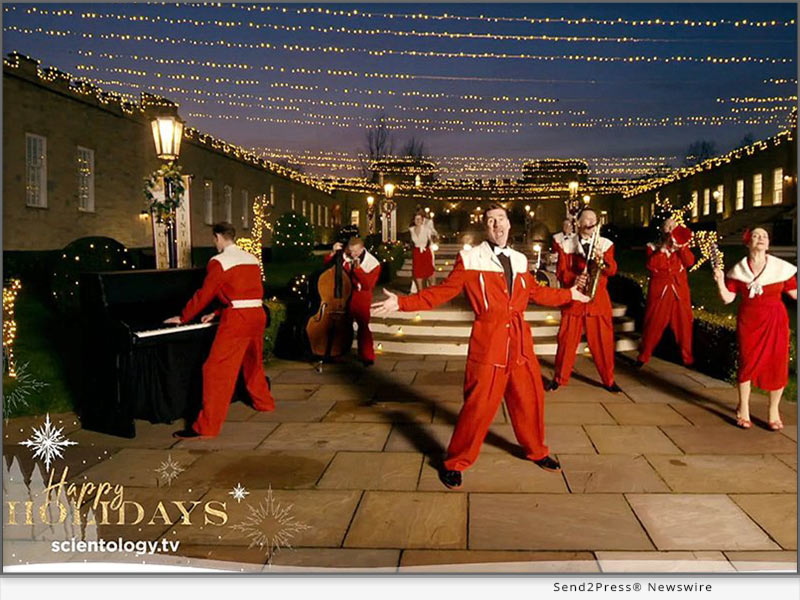 (EAST GRINSTEAD, U.K.) — NEWS: Share Christmas favorites with a trio of songs performed by the UK’s own Jive Aces, the first jive and swing band to reach the final round of Britain’s Got Talent. Join them as they unwrap a series of holiday favorites, rolling out a swing version of “Jingle Bells.” Sing along with them as they “Bring This Christmas to Life.” And remember that even if loved ones are far away this holiday season, you can still be together as they perform “Christmas is Where You Are.”

“Music is an international language,” says Jive Aces’ lead singer Ian Clarkson. “Through music, the emotions and feelings we all have in common can unite us.”

The Jive’s upbeat and uplifting music is so catchy and cheerful, that there’s one doctor who routinely prescribes their video of “Bring Me Sunshine” for depression.

In addition to their songs in the Scientology Network Holiday Concert, the Jive Aces are also featured in an episode of the original series, Meet a Scientologist. The band describes how they take their style from Harlem swing and jive bands of the 1920s and New Orleans Jazz, which was born in the same era.

A century later their music still fills dancehall floors with hundreds of fans jitterbugging, energized by the band’s contagious enthusiasm.

“That’s what we want to do,” says Clarkson, “use our art, use our music, videos, everything, to make people happy.”

The band members are also well known for their activism against drug abuse and addiction. Seeing first-hand the devastating effects of drugs on so many fellow musicians and artists, the Jive Aces adopted the Scientology-supported Truth About Drugs Campaign to promote drug-free living. They reach millions of people through street concerts in the UK, Europe and the U.S. And they spearheaded drug education booklet distribution, performing at the top of double-decker busses that rolled through the 2012 UK Olympics and 2014 Edinburgh Commonwealth Games.

Get to know the six members of the band through an episode of Meet a Scientologist on the Scientology Network. Each episode of this original series provides an in-depth look into the lives of individual Scientologists from the frontiers of modern art, science, sports, entertainment, and many other professions.

The Scientology religion was founded by author and philosopher L. Ron Hubbard. The first Church of Scientology was formed in Los Angeles in 1954 and the religion has expanded to more than 11,000 Churches, Missions and affiliated groups, with millions of members in 167 countries.