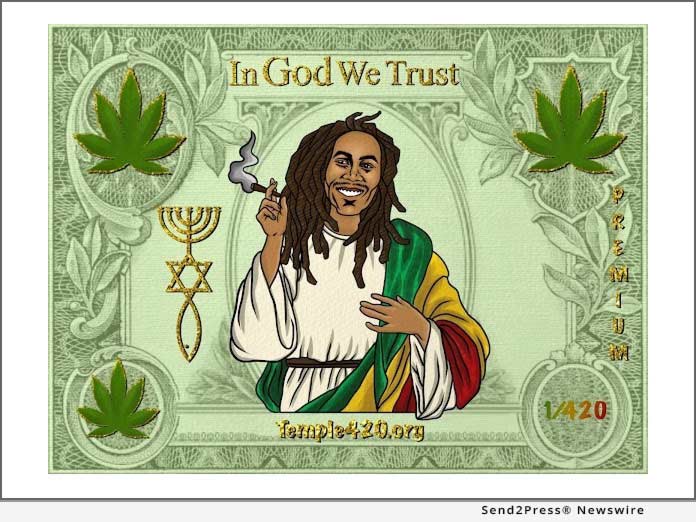 (LOS ANGELES, Calif.) — NEWS: “I think it is the church’s job to look out for our follower’s spiritual and financial well-being during this challenging time of global upheaval and Let’s Go Brandon! Temple 420 shares what we sincerely think and hopefully, the lives of people who listen to us are better for it,” says Temple 420 founder Craig X Rubin.

This pro-cannabis temple accepts donations in crypto currencies, such as Bitcoin, XRP and Shiba Inu even though these new forms of payment are controversial, Forbes magazine declared that crypto currencies were making racist and white supremacists wealthy, the church is promoting them because of their belief that we live in apocalyptic times.

Temple420.org is doing a 49-day ministry that launched on the Jewish holiday Yom Teruah, the Day of Shouts or Day of Trumpets. Temple 420 has launched twice before only to be stopped by law enforcement in Los Angeles. The leader of the church was given nearly 20 years in the justice system because his dispensary provided less than half the weight of one nickel, 2.5 grams of marijuana, to an undercover police officer with a doctor’s note allowing them to use medical marijuana.

The third temple was purchased during the COVID crisis. It is online focusing on End Times prophecy, but that focus has led to them being censored on social media. “The Temple teaches that the First Seal of Revelation was opened with the Crown virus. The ‘bow’ is the Greek word, ‘Tocson,’ (pronounced toxon), which means common cloth, such as a face mask.” The pastor admits that he could be wrong about his interpretation, but he says he is sincere in his belief. “The rider on the white horse is a medical professional acting as Christ, the healer, but in fact they are a false-Christ or pseudo-Christ.”

Temple 420 teaches that the Red Horse, the Second Seal of the Apocalypse, is a global secret war. “The world is in a storm. Society knows something is wrong. We are obviously not shooting people, but a red country is at war with the world. The Red Horse is taking the peace from the world. Nations are allowing themselves to be divided-within households and between the leaders and the people. That is why the Rider on the Red Horse carries a large sword to take the peace.”

Temple 420 is the “Crypto Church” because of the Black Horse who rides out at the opening of the Third Seal. The temple’s leader says these seals are coming faster now like a birth contraction,

“Almost all Biblical scholars agree the Black Horse represents famine and inflation and judgement upon a wicked people, so we are recommending to our followers, all 25 of them, that they buy XRP, SHIB, or Bitcoin to protect their wealth heading into the period of higher inflation and the potential for some food scarcity as the Bible predicts. We saw it happen with toilet paper last year.”

Temple 420 teaches from the Bible: “We are believers and Jesus said that He would not leave us unknowing in this time of Tribulation. I think Gold and Silver is God’s money just like Robert Kiyosaki says. Crypto is the People’s money because the central banks can’t print it into worthlessness. So, we encourage our followers to buy some.”

The Temple claims that there are negative sides of crypto too, “I think cash is freedom and I pray it does not go away,” says the Pastor, “but the Federal Reserve is abusing their power to create money. Like Ron Paul, I want to see them audited and to have some competition. Monopolies abuse their power. Crypto currencies are competition, a counter to the Federal Reserve’s monopoly.” Some Fed officers quit recently when it was revealed they were profiting in the market from insider information.

The Pastor continued, “I love Shiba Inu because I can send tiny payments to my daughter in college, Bitcoin as digital gold, a store of wealth and XRP because it is a global payment network with real world utility. So, I am not shy about saying that the people who follow us on you YouTube should put some of their assets into crypto currencies as a hedge against inflation. If you bought $500 in Shiba Inu last year, you’re more than good this year, a millionaire maybe? Peter Schiff is right about gold, but what are you going to do carry it around to go shopping? Mark Dice could not give away a $2,000 silver bar, but I can use my Coinbase card at the supermarket and spend my cryptos. We want our followers to be protected financially.”

A Holiday Celebration at the Church of Scientology L.A. Honoring the Diversity of Los Angeles Dec 30, 2021

The Church of Scientology in Los Angeles: Uplifting, Inspiring and Changing the World Oct 11, 2022