Home Business The Libya Relief Fund, is a volunteer-driven charity organization established to provide relief and aid to those affected by the humanitarian...
SHARE
Facebook
Twitter 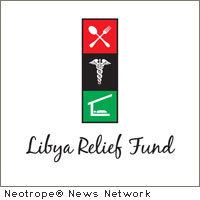 LOS ANGELES, Calif. /eNewsChannels/ — The Libya Relief Fund, a volunteer-driven charity organization established to provide relief and aid to those affected by the humanitarian disaster in Libya, today launched a nationwide appeal and fundraising campaign designed to raise awareness of the human and social crisis unfolding in Libya and educate the general public on the nature of the conflict, the Feb. 17 movement, and the Libyan people’s struggle for freedom and human rights and the inhumane repression that followed.

“Since the peaceful demonstrations that began in February and in the ensuing barbaric crackdown and ongoing siege of Libyan cities by the Gaddafi regime, a humanitarian catastrophe has unfolded in Libya, with many areas in urgent need of medical supplies, food, and the most basic aid,” says Ryad Sunusi, a director of the Libya Relief Fund and member of the Libyan Movement for Democratic Change.

Muammar Gaddafi, the self-styled “Leader of the Revolution,” along with his son Seif Al-Islam and right-hand man Abdullah Snusi, were recently indicted for war crimes and crimes against humanity and warrants for their arrest issued by the International Criminal Court. Evidence has linked the use of torture, mass rape, and murder and repression of the civilian population to direct orders coming from Gaddafi, his sons, and their inner circle.

Sunusi, a prominent Libyan businessman and consultant, turned against the regime and announced support for the Feb. 17 revolution immediately after the violent crackdown and slaughter of civilians committed by the Gaddafi regime in Benghazi, and together with other Libyan businessmen and professionals, committed funds to purchase and deliver aid to cities under siege by regime forces.

The scope of the humanitarian crisis in Libya is catastrophic and fluid. Since Feb. 15, when the Libyan people rose to speak out for freedom and democracy and against tyranny and repression and the ensuing and ongoing crackdown, an estimated 11,000 people have lost their lives and 750,000 have been displaced. Over 40,000 refugees, many women and children, fled the fighting and are camped on the Libyan-Tunisian border and lack basic necessities.

“Our national fundraising campaign will include fundraising dinners and auctions in cities across the United States, workshops, fundraising marathons and special events, and other activities, which will go solely to relief efforts in Libya and provide purely non-lethal aid,” Sunusi said.

“We are understaffed and need as much assistance as we can get. We welcome any assistance from individuals and organizations in assisting our nationwide fundraising efforts and welcome volunteers, promoters, and anyone willing to work with us and help raise funds for the Libyan people,” Sunusi added.

The Libya Relief Fund, a California NPO, has been at the forefront of the effort in delivering much needed supplies and aid to where it is critically needed most, through direct supply networks in Libya through volunteer teams on the ground in Libya, Tunisia, and Egypt to provide medical aid, food and water, shelter, educational services, and support services for refugees affected by the conflict, as well as working with local, regional, and international aid agencies.

About The Libya Relief Fund:

The Libya Relief Fund is a California nonprofit charity organization established to respond to the urgent need for humanitarian assistance and relief for the displaced, injured, and needy in Libya.

Founded by Libyan professionals in the U.S. and abroad and volunteer-driven, the Libya Relief Fund is dedicated to fundraising and soliciting donations for the benefit of the Libyan people and those affected by the humanitarian disaster in Libya. For more information and to donate, visit .

As the Cost of Food Soars, North American Van Lines and Move For Hunger Renew their Partnership in 2022 to Provide Hunger Relief Jun 13, 2022