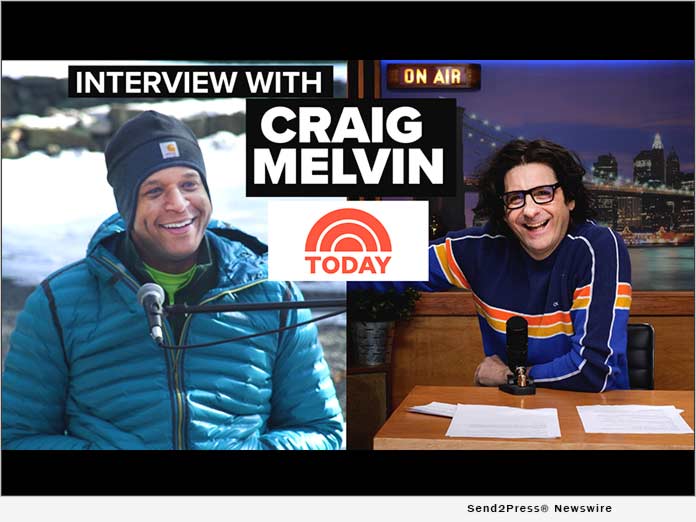 (WESTPORT, Conn.) — NEWS: On December 9 of 2020, Craig Melvin, a news anchor on the Today Show, lost his forty-three-year-old brother, Lawrence Meadows to colon cancer. Weeks later, Craig sat down with “Ten Minutes With Brian Kelsey” talk show host, Brian Kelsey, for an off-the-wall interview, oddly enough, in Brian’s driveway. The result was nothing short of heartwarming and surprisingly humorous as well.

Prior to the interview, as Brian took care of some unfinished business, Craig warmed up outside, literally. He was accommodated with a lawn chair and glass of bourbon next to a makeshift fire pit out on the driveway. Craig didn’t seem to mind.

Normally, Brian conducts his interviews in the garage. But, due to COVID-19 precautions, the driveway was deemed to be a safer setting.

Initially, Craig and Brian swapped COVID-19 stories and Brian brought up an emotional moment for Craig concerning the virus that was caught on tape. Craig called himself a ‘mush-ball’ and commented that his personal belief is that if the news doesn’t affect a journalist, they need to look for another job. He admitted to, at times, wearing his heart on his sleeves.

After throwing another log on the fire (again, literally), it was onto a deeper, more serious subject, the death of Craig’s older brother who was a minister. While Craig was notably shaken by the loss as the two were extremely close, he managed to recall some very funny stories which he told. Through his sorrow, Craig has not lost his sense of humor. One gets the feeling that is exactly how his late brother would want it to be.

Craig has been a co-host for the Today Show since 2018. His wife, Lindsay, is also a journalist. They have two young sons. Prior to the Today Show, Craig worked at MSNBC and other television networks as well. He is especially close to fellow journalist Bryant Gumbel.

Brian founded his quirky talk show, “Ten Minutes With Brian Kelsey”, when he turned a crazy, but innovative, idea into reality. It all began when Brian started working for Howard Stern as a writer, producer, and the actual ‘voice’ of Stern. Even though he was the host of a four-hour regularly scheduled talk show on Martha Stewart Living Radio, had a short running spot with a home renovation show on NBC, and has made numerous appearances on shows like the Today Show, the former radio show host, craved more. One thing led to another until a dream was born. He debuted a one-of-a-kind celebrity-ish talk show in the confines of his garage, next to his washer and dryer. Not surprisingly, the show took off.

While the interview is not the only one Craig granted on his brother’s death and is certainly not the only show Brian has filmed with a celebrity, the chemistry between the host and guest is definitely present throughout the time they shared, sparking a unique revelation of impromptu bittersweet memories.

Check out Craig’s interview and for more information on Brian Kelsey’s “Ten Minutes With Brian Kelsey,” click onto his website: https://www.tenminuteswith.com/.