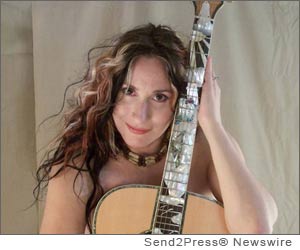 LOS ANGELES, Calif. (SEND2PRESS NEWSWIRE) — Showing love for one of the world’s most respected songwriters, Danielle Egnew has recorded “Play Some Merle,” a fast-paced country-rock song that demonstrates how performing a little music by The Hag will improve almost any situation, including calming hot tempers to avoid a bar fight.

“I have always been in awe of the songs of Merle Haggard,” Egnew states, “so when the opportunity came to be part of this song, I jumped at it.” Many of the characters and situations in the song were the result of Egnew experiencing life on the road in several bands, most notably Pope Jane, the all-girl rock group that has been recording and performing throughout the Mountain West and Pacific Coast states for more than a decade.

Handling all instruments and vocals on the recording herself, Egnew presented the finished track to Producer Matt Forger for review. Forger has a long list of indie and major label credits, including working on the current “Bad25″ Michael Jackson box-set. “The lyrics and the drive of the song were undeniable,” Forger states, who has expressed interest in producing his own version of the tune.

A video for “Play Some Merle” was shot in the towns of Sheridan and Story, Wyoming, with Egnew and co-director Roy Pack approaching townspeople right on the street to solicit their participation. “There’s such an Old West way of doing business there. It’s great,” says Egnew, originally a native of Montana. “We’d ask people if they wanted to be in a video and as soon as we said the title of the song, everybody was like: ‘I’m in!’ It was just so cool!”

The “Play Some Merle” single is the first official release on a newly-created label, Tin Star Records, which was formed at the end of 2011 by Egnew and Pack. Working with Americana artists primarily in the Rocky Mountain West, the company has offices in Sheridan and Los Angeles. Shure, Inc. partnered with Tin Star to create the first all-Shure commercial recording studio, featuring Shure’s studio KSM series microphones. In addition, Egnew herself is endorsed by Minarik Guitars, In Tune Guitar Picks, Studio Devil Software, and Scoop Straps.

Credits for “Play Some Merle” include songwriters Egnew, John Scott G, and Philip Hatten, while the publishing companies are Golosio (BMI) and Ave Vox (ASCAP).

Youthful Faces - NYC Dancers Step Together in Short Musical Film to Encourage Our Youth to Speak Out! Oct 10, 2019