COLUMN: A feature-length documentary called BOMB IT examines all sides of the graffiti controversy, but it’s clearly on the side of the artists. Scott G is in favor of this viewpoint provided you don’t spray paint his neighborhood. As the director of music videos for Nine Inch Nails and Slayer, director Jon Reiss would be a good choice for an in-depth look at the international graffiti art scene.

When you consider he also directed the hyper-involving documentary feature on rave culture, “Better Living Through Circuitry,” you realize he is the ideal individual for “Bomb It,” a passionate and overwhelmingly entertaining presentation of the history, excitement, controversy, beauty, political outrage, and kinetic energy of the global street-art form. 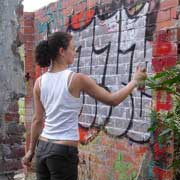 “Bomb It” is a blast of raw energy that is exhilarating or exhausting, depending on your affinity for the subject matter. The 93-minute film contains oodles of guerrilla art from five continents, interviews with 100+ artists, counter views from law enforcement officers and civic leaders, a thrilling and throbbing soundtrack, and enough thought-provoking comments to fuel a dozen documentaries.

For example: As an artist, I love the idea of grabbing the world as my canvas. Yet my freedom to express my music does not give me the license to play it at 110 decibels at 3 in the morning. No such boundary seems to enter into the mindset of each graffito maestro who is asked about it in the fast-paced course of “Bomb It.”

There are many other intriguing points to consider in the film, including:

– What constitutes a canvas? “Any surface anywhere!” is their motto.

– Where should art take place? “Here! There! Everywhere!” they howl (without actually quoting from a Lennon/McCartney song).

– Is any public space an opportunity for confrontation, display, and/or discussion? “You betcha!” is their view.

It is enticing to join in with these artists and their “up the revolution” approach to the world. I agree with almost everything they say, in principle. But then I think of my house, and my neighbors’ homes, and all of a sudden I’m on the side of the cops. Sorry, but leave my walls alone, man.

But no matter what you think of the issues touched upon here, there is no denying that it’s a stone solid blast to see, hear, and feel the power of “Bomb It.” Highly recommended.