Home California When an Electronica Geek and a Country Artist Work Together, the Result Will be Beautiful Music or the End of Civilization...
SHARE
Facebook
Twitter

“With six dozen new production music tracks and well over a hundred songs, we’re ready to create any type of sound you can imagine,” states Scott G, who is also the recording artist known as The G-Man.

Colosio has been playing keyboards with country legend Merle Haggard for the past seven years and has songwriting credits on some of Haggard’s recent albums. “I’m looking forward to anything Hag has in mind,” Colosio says, “but working with Golosio Publishing will also let me play jazz, swing, rock and funk, in addition to country.” 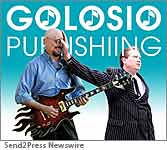 The G-Man points out that “You have heard my music whether you know it or not, because it has been on lots of commercials.” His six albums on Delvian Records are played in clubs as well as on college and Internet radio around the world.

Songs by other writers and artists are also in the Golosio catalog, including roots and Texas swing from Scott Joss (now also with Merle Haggard and formerly in Dwight Yoakam’s band), rock from James Sotelo, urban tracks by Funk Foundation, and trance tracks by Holland’s DJ Insane.

G and Colosio like to say that they “are serving the audio needs of producers everywhere from our twin studios inconveniently located in both Los Angeles and Redding, California.” Inconveniently? “Well,” Scott says, “depending on how close you want to be to Universal Citywalk or Merle’s ranch.”

For more information, to license songs and production music tracks, or to commission original music, visit http://www.golosio.com or call 818-223-8486.