eNewsChannels COLUMN: A collection of articles about boxing, Katherine Dunn’s ‘One Ring Circus’ covers a lot of road: defense of the sport, call for reforms in the sport, two-fisted literary revelry in the sport, and just plain beautiful writing about the sport. 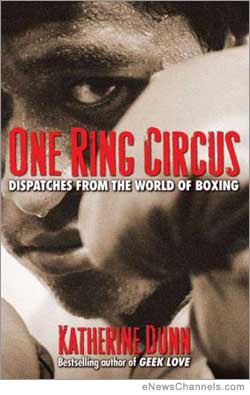 Katherine Dunn could probably compose sonnets about the Dewey Decimal System and make them fascinating. So when she turns her attention to something as violent, shocking, complex, and contradictory as boxing, you can just settle back and let her prose do its thing.

And its thing is to put you in the room with the fighters, promoters, trainers, and self-described gym-rats who are the colorful participants in the fight game. Dubbed “the sweet science,” boxing has a rich and ridiculous history and Dunn delves into some of the more entertaining aspects but with deep respect for the dedication of its participants.

Her view of the sport as humanity-in-microcosm is revealed in the Introduction:

Boxing is simple. Two unarmed volunteers, matched in weight and experience, face off in a white-lit square. It is ritualized crisis, genuine but contained. At its best, a bout is high improvisational drama and the boxers are warrior artists. When it falls short of perfection, which is almost always, the failures are interesting in themselves. Horrifying or hilarious, and all points between, no two fights are alike. What happens in and around that mislabeled ring is a potent distillation of everything human.

That is as perfect a description of the esoteric world of boxing as any I’ve seen, including the magnificent work of the acknowledged master of boxing journalism, A.J. Liebling.

Yes, I can hear the snorts of derision at this. “You’re comparing some gal reporter with the great writer who is so revered that there are paeans to him online titled “The Church of Liebling” and “The Dazzling Talents of A.J. Liebling,” you’re seriously doing that?” Well, yeah, in terms of this book (I’m not familiar with Dunn’s other work.). Look, I’ve read Liebling’s collection, “The Sweet Science,” and it is superb. But so is Dunn’s collection.

So, how does a nice girl like Dunn get involved with the sweat-soaked and blood-stained organized battles and studies in pain that is the world of prizefighting? “My family was pretty typical in that the men were interested in boxing and my mother disapproved. She called it barbaric and vulgar. That was enough to intrigue me,” she writes.

Dunn puts things in some sort of personal historical context:

…post WWII America was a rough place, as I recall. Racism and sexism were insistent and institutional. Spousal battery was condoned. The smacking and whipping of children in school and at home was expected. Gangs were common. Brawls boiled up in streets, playgrounds, taverns and workplaces.

At the time, boxers struck me as peculiarly civilized. They didn’t screech or holler. They didn’t use knives or bicycle chains or chunks of plumbing, and they only fought when the bell rang. When it rang again, they stopped. Amazing.

The book is full of observations that are piercing, such as the fact that boxers spend a thousand hours in the gym for every minute in an actual bout, and that the “difference between the gym and the klieg-lit show ring is the difference between a garden and the sprig of celery in your Bloody Mary. They’re related, but they’re not the same.” And this:

Boxing is a demanding set of skills, as unnatural and precise as piano or quantum mechanics. It takes years to learn the basic moves and more years to develop finesse. Training shapes the growing body, sculpts bone and muscle, hones reflexes and stamina, and builds the necessary self-discipline.

Fine phrases flow fast and furious throughout the book. Over here, a boxer is “moving as light and true as a mother’s prayer.” Over there, “The sky is an aluminum pan with one polished spot.” She even has a chapter on a fight that you wouldn’t read about on the sports pages. As she puts it, “I’m not altogether sure the bout was legal, but it was fun.” And then there are her powerful words about the fights, both the good ones:

The first round is a bubbling blister from hell.

The pace was furious. They ate punishment and rallied to return the favor. Dominance seesawed between them. Both refused to lose. It was personal. It was a hurricane in a box.

As well as the less-than-great ones:

…a slow rhino waltz of heavyweights.

There’s also her view of the same-as-it-ever-was aspect of the sport. Dunn writes that the foolishness and mix-ups of “the present boxing administration obviously do little to enhance the sport’s image.” She wrote that in 1983, and the truth of it has scarcely changed in the past two-and-a-half decades.

Raising some eyebrows was her article taking the Mike Tyson side of the story regarding the fight with Evander Holyfield in which Tyson bit off a piece of Holyfield’s ear, “Defending Tyson: The Bite Fight.” She makes a good case and convinced me to go back and look at video of the entire fight.

She gets great quotes from people, and quite often from the people you’d’ most want to hear talk about the pugilistic arts, including Freddy Roach, Bob Arum, Larry Merchant, and the fighters themselves. Example: in speaking about Johnny Tapia, a world champion in four weight classifications but always in trouble because of drugs, Merchant noted that Tapia was “a 5 to 1 underdog to survive his own childhood.”

There are passages that seek to improve conditions in the sport. A couple of sections bemoan the fact that “Corner men are still not required to prove they know anything to get a license… There’s a long history of trainers and corner men and managers learning at the expense of their fighters. The fighters come and go but the sidemen stay.”

Three sections of the book are devoted to the distaff side of fisticuffs, including a fascinating up-close-and-personal overview of Lucia Rijker, who had steamrolled through kickboxing with a record of 36-0 and 25 knockouts, then moved to boxing and eventually retired with a record of 17-0 and 14 KOs. Even if you do not follow boxing, you know some of Rijker’s work: she coached Hillary Swank in the Clint Eastwood film “Million Dollar Baby” and played the villainous Billie the Blue Bear in that Oscar-winning movie.

In a chapter called “Just as Fierce,” Dunn writes convincingly of the need to smack down the sexual stereotypes that define males as perpetrators of all violence and women as the repository of all things sugar-spice-nice. As she points out, “…defining women as inherently nonviolent condemns us to the equally restrictive role of sweet, meek, and weak.”

A thrilling part of the chapter talks about one of her mom’s relatives, a gentle woman named Aunt Myrtle…

A classic Myrtle tale describes how she dashed into the subzero cold one winter night, clad only in boots and a nightie, to battle a pack of prairie wolves who were killing her prize turkeys. My mother, a child then, watched amazed from the kitchen window as Myrtle the dainty, the kind, danced with her kindling hatchet flashing into the skulls and spines of fanged and flickering beasts. Blood exploded in black sprays across the snow. “And that Christmas,” the story always ends, “she gave us kids wolfskin mittens, with the fur side in, and stitched snowflakes on the cuffs.”

What a great combination of “wow” and ” awwww.”

Clear View of the Human Heart

“A good boxer is a miracle of chaos mathematics,” she writes near the end of the book, and then in the next five pages, she proves it. Her style is sleek without ever calling much attention to itself, but the humanity in it is often wonderful to behold:

No matter how often I see this it still gets me — the first time a kid meets a coach, the first lesson. It’s a brief moment when the glass clears and you can see possibilities branching into the future. An ignorant coach is a bad teacher who can injure his students. A good coach is the opposite. Every skilled boxer met a good coach along the way. Considering the many alternatives it’s a kind of miracle when it happens.

I’m now a fan of Dunn’s writing and intend to check out her novels (Attic, Truck, and Geek Love). Just pure beautiful writing, that’s what you get from this book. Let me leave you with two examples. There’s this description of well-conditioned fighters:

Mere Hollywood magic can’t compete with the luminous intensity honed by a life of fear for breakfast, sweat for lunch, and pitched battle before supper.

And this distillation of what should and can happen in the world of boxing:

This fight was a circus, as all big boxing matches are. The glitter gets the audience in the door and puts them in the seats. And then the joke is over. The white lights go on above the ring, and two people give whatever they’ve got. Sometimes it’s a clear view of the human heart. That doesn’t happen every time. Maybe it doesn’t happen often enough. But when it does — as it did that night — it’s the greatest show on earth.

Article is Copr. © 2011 by John Scott G, and originally published on eNewsChannels.com – all rights reserved; commercial re-use prohibited. Disclosure: No feed or other consideration was paid/provided to the author of this original article, this site, or its publisher by the book’s author/publisher/agents.