TONAWANDA, N.Y. — The week-long experience of retired N.Y. firefighter Jim Thomsen after 9/11 at Ground Zero volunteering to search steaming dust and rubble for survivors, made him determined to develop a protective Air Shield that might someday reduce the danger of inhaling toxic dust. Just outside Buffalo, N.Y., he found the small workshop of Ted Arts, and as partners developed new technology able to protect against anthrax or other airborne terrorism attacks.

Their determination was rewarded on February 8th, 2008 as the U.S. Patent office issued patent #7326387 for the Air-Shield technology in their Portable Air Safety System (PASS). Barely a week later, the urgent need was evident when deadly ricin dust was discovered at a Las Vegas Hotel. The PASS system is a suitcase sized unit that can suck in and neutralize anthrax, nerve gas, ricin, dirty bomb radioactivity and more. But not limited to rare events the PASS is used by health care, schools, emergency services for less deadly smoke, fumes, dusts, tear gas, TB, mold, etc. 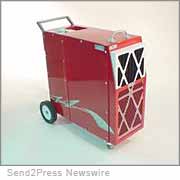 The small size of the unit’s rugged steel housing on wheels can fit down an aircraft aisle or stored in a closet. HEPA filtration, UV light, and antiseptic ozone treatment are combined in the device to wipe out all infectious particles allowing entire rooms to be negatively pressured to stop contamination spread.

Rather than focus only on the military or health care uses the new PASS system was designed for schools, businesses, or personal home use for dozens of common hazards. Thomsen explained, “Your lungs acting like sponge shaped cheesecloth expose 2 quarts of your blood to anything you breathe allowing any toxin inhaled to be pumped to every cell in your body in less than sixty seconds.” With the new device hazards can be sucked away from occupied areas or airflow reversed to push away toxins creating an Air-Shield of purified safe air zone. With an ozone feature in one weekend it made a FEMA trailer safe, killed mold, germs, and cruise ship viruses by turning contaminated air antiseptically sterile, particle free, and odorless. “Ozone acts on air the same way Clorox Bleach does on surfaces by sanitizing through oxidation and killing any odor and yet an hour later it reverts to pure oxygen with a fresh clean smell,” the inventors claim.

When ricin was found at a Las Vegas hotel recently, hotel staff and emergency responders could have inhaled or unknowing brought home contamination on their clothes exposing risk to their families. As NYC news rooms and others were targets of anthrax attacks in 2001 and cruise ships still struggling with norovirus outbreaks the risk of SARS or an Avian Flu pandemic highlight the perfect timing for this new technology? Costing less than $5,000.00 the durable PASS device can function for decades; often cutting 90% of potential medical and other costs to treat TB or infection exposed persons, cleaning the buildings and avoid business shutdowns, and lawsuits like the multimillion dollar moon suit clean-ups for anthrax at the Hart Senate Building.

Proven by Hazmat teams, hospital and military applications the unit is more often employed by contractors to remove airborne risks from accidental releases or household hazards like mold, asbestos, pesticides and by trauma cleanup crews at crime scenes. One contractor said after first using the system “that thing could suck your socks off” instead of just diluting airborne hazards by opening widows to ventilate which can leave deadly risks behind.

Family members with asthma, lung disease, HIV, compromised immune systems, undergoing chemotherapy or anti rejection drug therapy can now do more than wearing masks and gloves by actually sterilizing the air and all the surfaces it touches. In 30 minutes it’s possible to treat the entire atmosphere of a 2,000 square foot home to antiseptic operating room standards allowing some patients now restricted to hospital isolation to return home safely reducing hospital stays and cost. When prescribed by physicians, the unit cost sometimes is tax deductible or covered under medical insurance.

PASS can also be set to treat unoccupied rooms to an antiseptic state with disinfecting ozone which also treats every surface, clothes, dishes, beds, furniture removing allergens, mold spores and dust. At day care centers, hotels, and other public places nightly PASS use would reduce the spread of colds, flu and other infections while neutralizing most foul odors. With FDA and EPA approval the PASS has been used by hospitals to treat TB, remove smoke after a fire, creating portable isolation rooms, and even to remove the burned popcorn smell in the cafeteria.

Fire departments, police, government, shopping centers, hotels, cruise ships and schools now have this new tool to respond to the threat of bioterrorist attacks, disasters and routine airborne hazards to protect their staff, the public and customers. This is especially important in the era of sealed buildings, underground workspaces or windows that cannot be opened.

Photos and information of the public version are at and the manufacturer’s complete line of models for military and healthcare is at http://www.AirIso.com .

How To Get A Job In The Cannabis Industry: Sierra Nevada Education Launches Can-Ed App to the Public Sep 26, 2019