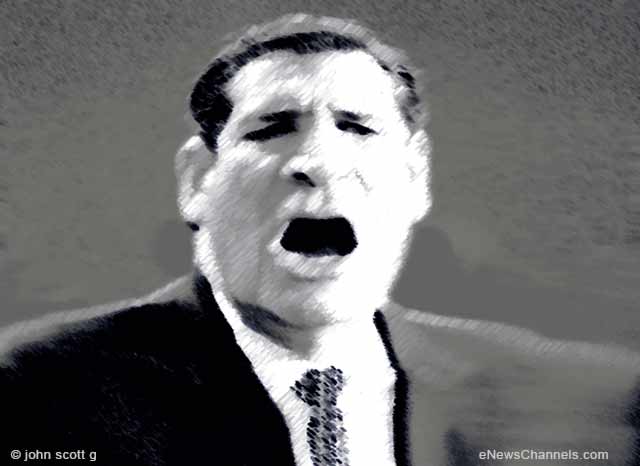 Ted Cruz, short on intellect but long on hatred, seeks to pocket as much money as possible from a failed run for the presidential nomination of the USA’s Taliban Party. But a new computerized breakthrough may be his noisy undoing.

It’s usually instructive and always entertaining to speak with Skunkbreath and Wetpalms, the two GOP operatives who make their living performing dirty tricks for whichever scummy Republican candidate stoops to hire them. This week our topic of discussion was Tailgunner Joe, the notorious demagogue Joseph McCarthy.

Publisher’s Note: this series of political articles running up to the 2016 political election are intentional satire, by author John Scott G, and not based on actual fact (aside from some of the stupider things, which are sadly factual).

Oops, wait a second. My mistake, I meant Fire Crier Teddy, the notorious demagogue Ted Cruz. You can understand my error — they resemble each other physically and spiritually, plus they have the same laissez-faire approach to things like facts, truth, justice, fairness, and decency.

“Yeah, Teddy-boy is a bit of a throwback to when Red-baiting was a successful stunt for troglodyte candidates,” Skunkbreath said.

“Man, those were the good old days,” Wetpalms said, “when you could say one thing in front of one audience of goobers and then turn around and say something else to another group of rednecks, and people didn’t pay attention to that trick.”

“So you think he’ll be caught?” I asked.

“Well, the press will document his gopisms but it won’t matter much,” said Wetpalms.

“Yeah.” He saw I was unfamiliar with the term. “It’s pronounced ‘gopisms’ but it’s spelled G-O-P-isms. You know: the crap that Republican candidates spout about freedom and god and country and family and values.”

“Besides,” Skunkbreath added, “Cruz has got that rabble-rousing preacher-man style that really works with audiences who are retarded.”

“These days, people object when you use the word ‘retarded.'”

“Oh my, my, my,” he said, his voice dripping with sarcasm. “I meant audiences who are dim-witted. Is that better?”

I ignored him and went back to my prepared list of questions: “Do you think someone like Ted Cruz can win the TeaPublican nomination?” I asked.

“Nope,” the other one said.

“Too radical for Republicans?” I asked.

“Not to mention the fact that many people want to send an invoice to Cruz and the Republicans for the twenty-four billion dollars they cost the country when he led the government shutdown in 2013,” Skunkbreath said. “People sometimes forget how expensive it is to put people like Cruz in any sort of decision-making capacity.”

“The point is, he can’t win,” noted Wetpalms. “Everybody knows that. Hell, even Republicans are calling him Dead Cruz. There’s already a hashtag that says #LoseCruz.”

“And another one says #YouCruzYouLose.”

“My favorite,” said Wetpalms, “is #DreadCruz because, well, for obvious reasons.”

“You mean because he wants to destroy the basic tenets of America?” I asked.

“But don’t all Republicans want that?” I inquired, knowing the answer.

“Well, sure, but remember that Republicans who run things — the small number who aren’t morons — want to replace our democratic capitalistic system with an oligarchy. But Ted Cruz wants to destroy everything just to be able to watch it cumble. Kind of like a kid using a magnifying glass to set fire to an ant hill or a bird’s nest just for kicks.”

“But if he can’t win, what’s the point of his campaign?” I asked.

“It’s like with Mike Huckabee, Ben Carson, Herman Cain, Sarah Palin, and all the fringe candidates,” Wetpalms pointed out.

“Good. So, the candidates use that money for travel, advertising, campaign events, and so forth. But here’s the thing: if the money is placed in the right kind of political action committee…” he paused dramatically before concluding: “the candidates get to keep any money that’s left over, no questions asked.”

“Right,” Skunkbreath added. “And along the way they get free publicity from the media. Whether they win or lose in any of the primaries, they use the higher name recognition to get higher fees for speaking engagements, book deals, a wingnut radio show — maybe they even get a Fox Fake News show, all of which can lead to more speeches and other books.”

“Or they can really go the Huckabee route and tout bogus mail-order products,” Wetpalms said.

“The Huckster is making bank from fake educational crap, fake weight-loss crap, fake diabetes cures, and all sorts of schemes.”

“Plus, they can then sell their mailing list of suckers to other scam artists. Running for president is a great way to set yourself up for some heavy coin.”

“Isn’t there anything that can be done to stop them?” I asked.

They glanced nervously at each other. Finally, Wetpalms broke the silence.

“Well, I probably shouldn’t be saying this–”

They eyed each other again. The tension in the room was becoming oppressive.

“Aw hell,” Wetpalms said, “if we don’t tell you, someone else will.”

“Okay,” Wetpalms said, “here goes. Have you ever heard of Professor Clarence Jacklande at the CORTEX Project?”

“CORTEX. It stands for, uh, Cognitive Online Recognition, um… what the hell?” He looked at Skunkbreath in exasperation. “A little help here.”

“Christ,” Skunkbreath said. “Cognitive Operative Recognition, Translation and Explication. And that’s all you’ll get out of me.”

“Good. Okay, thanks.” He turned back to me and said, “Basically, the Professor has a computer program that analyzes human speech in real time and tells you if the statements are truthful.”

“What? Is that possible?” I asked.

“Apparently,” Wetpalms replied. “It’s got Republicans absolutely terrified. I mean, just look at what the thing showed for the Ted Cruz speech.”

“You have a printout from the computer?” I said in amazement.

“Yeah. Don’t tell anyone. But look what it shows. Right near the start, Cruz says ‘our rights don’t come from man, they come from God Almighty.’ Computer says BUZZZZZ! WRONG.”

“The computer types in all caps?” I asked.

“Guess so. Or look here, where Cruz says ‘the purpose of the Constitution, as Thomas Jefferson put it, is to serve as chains to bind the mischief of government.’ Computer says BUZZZZZ! WRONG. QUOTATION NOT FOUND IN ANY THOMAS JEFFERSON WRITINGS.”

“Cool,” I said. “That’s helpful for the electorate.”

“You got that right,” Wetpalms said. “Okay, so look here where Cruz says that the federal government is trying to ‘dictate school curriculum through Common Core.’ BUZZZZZ! WRONG.”

“This thing is terrific,” I said.

“And look at this: Cruz says that because of Ronald Reagan’s policies, millions were ‘lifted out of poverty and into prosperity abundance. BUZZZZZ! WRONG. AND BADLY WORDED. Isn’t that wild?!”

“It sure is,” I agreed. “Maybe the computer should say CRUZZZZZ! WRONG.”

“Anyway, this CORTEX thing is great,” I noted.

“And just wait until they start with the truth implants for everyone in government.”

“Implants. Little microprocessors that are stuck in under the skin. Subcutaneous, I think they call it. They go into the fatty part of the shoulder blades.”

“Oh yeah, it’s for real. They’re calling these things ‘Truth Chips,’ or ‘Republicant Chips,’ or ‘Democracy Chips,’ or ‘Democrachips.’ They’ll monitor the speech and votes of politicians, judges, police. They send a signal out to cell phones within a 100-yard radius and warning buzzers go off when someone lies or denies reality.”

“That sounds bizarre,” I said.

“Man, I was over at Faux News when they tested it on O’Reilly and Hannity. Each time, about a thousand cell phones started buzzing around the building and just wouldn’t stop.”

“This is totally incredible.”

Skunkbreath sighed and added, “And the end of the Republican Party as we know it.”