PITTSBURGH, Pa. — Knowledge Publications, a leading publisher of energy books, has put significant portions of the chemistry content of the free online encyclopedia, Wikipedia.org, in full published, printed book form and has done so in full compliance with Wikipedia’s GNU Free Documentation License. The book is titled, “The Chemical Educator: for The Chemistry and Manufacture of Hydrogen” (ISBN: 978-1-60322-067-5).

Steven Harris, CEO of Knowledge Publications, states, “The book, The Chemistry and Manufacture of Hydrogen, is one of the best books ever written on the manufacture of hydrogen. Whether it is on a home, laboratory or industrial scale, this book covers it. The book has been so well received by our customers that we created a DVD that complements the book and now we have released the first in the Chemical Educator Series which is 100% Wikipedia content and a tutorial on each chemical listed in the companion book.” 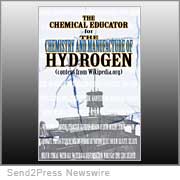 Harris continued, “We released this book in printed form as a learning convenience. It is for study, for classroom education and for making notes and reference. As a publishing company we can either recognize the future and thrive with it or fail to see the future of media and get dragged along kicking and screaming as the RIAA and Hollywood has.”

Steven Harris, founder of KnowledgePublications.com, is a former automobile research and development engineer from Chrysler. He is so committed to the concept of open source and freedom of knowledge that next month he has planned to release an open source, wiki style, Ethanol Alcohol Fuel Micro Plant. This micro plant can make 5 gallons of ethanol fuel a day that will work in almost every vehicle on American roads. The micro plant is made from all off the shelf mass manufactured components and can be put together by an individual for less than $100. The open source project will include the details on how each person can get the free federal alcohol production permit.

Mr. Harris was also quoted as saying, “Let’s see what OPEC thinks of information so freely available that a million Americans can make five gallons of their own ethanol fuel a day.”

Wikipedia(R) is a registered trademark of the Wikimedia Foundation, Inc.