AUSTIN, Texas — With the advent of IMPACT – the Ironworker Management Progressive Action Cooperative Trust – the Iron Workers Union launched a robust and far-reaching campaign designed to benefit both business and labor. IMPACT’s innovative initiative aims at building a strategic, modern-day alliance between union workers and their employers while dissolving employers’ historic objections to hiring union. In his inaugural address, President Barack Obama expressed commitment to reinvest in the U.S. infrastructure rebuilding roads and bridges as his administration moves to redirect the economy. 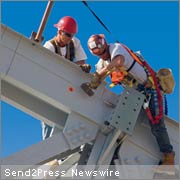 To a struggling construction industry this is very good news indeed. The Iron Workers Union and its members are on the same page with the new president’s vision-emphasizing productivity, performance and profitability to insure their members, and their industry employers survive and thrive in the tough economic times at hand.

To seal the deal, IMPACT, local unions and signatory employers steadily focus on amping up market share for both sides. To do so they cultivate bilaterally beneficial partnerships with signatory contractors while building a new army of top-notch young ironworkers trained to be the best at constructing the complex buildings, bridges, skyscrapers and civic centers of the future.

IMPACT and the ironworkers have been working hard to regain market share in their industry. Though union ironworkers still build a large percentage of significant commercial and public projects like the new Dallas Cowboys Stadium in Arlington, Texas, the union’s market share within the industry has decreased-an equation IMPACT is set to reverse.

As Mike Gravette, a 35-year veteran ironworker and union leader in Texas, points out, “It is not the old union anymore.”

Through IMPACT and its multiple programs, the ironworkers union through its District Councils, like the District Council of Texas and the Mid-South States (www.ironworkerstxmidsouth.com) works closely with signatory contractors, industry leaders and business owners, adding partnership value and pushing the bar for increased ironworker performance, productivity, quality and safety. “Union ironworkers make money for the owners and the contractors who hire us,” Gravette points out. “It’s this simple – union ironworkers do it right, on time and on budget – that makes the difference at the bottom line for any employer.”

Intent on delivering that message and a union workforce that employers prefer above the rest, IMPACT (www.impact-net.org) has established a tough, drug-free workplace program and industry-best foreman training. It offers ongoing certifications and training to stay in front of the increasingly complex technologies of construction its members must master.

Union leaders know that the access they offer to a work force of well-trained and mobile ironworkers working under a fair negotiated wage/benefits structure can be a big plus for contractors; saving them both time and trouble. Local offices can help assemble a team of ironworkers with the right skills and resolve hiring problems for the employer -who otherwise, would need to track down and negotiate with each ironworker individually.

John Bosworth, who heads Dallas-based Bosworth Steel, is one of the leading steel erectors in the U.S. and serves as president of the Signatory Contractors Association affiliated with the District Council of Texas and the Mid-South. “From my perspective, it is imperative to have quality employees on the job,” he says. “For me, being a signatory contractor is a smart business decision.”

Through its comprehensive apprenticeship training, journeyman-upgrading programs, safety certifications, and rugged on-the-job field training, the ironworkers union builds skilled performance in its members. Three-year apprentice programs (www.ironworkercareers.com) combine classroom instruction and paid work experience. On the job and in the classroom, there is an implicit challenge to step up to the line in this elite corps and be the best.

For union apprentice ironworkers, on the job training is essential. It is there they build know how and the skill set for this tough occupation, and gain a sense of well-earned self-respect. Gravette acknowledges this drive to be the best is at the root of a longstanding tradition of pride in their work shared by union ironworkers since the organization’s inception in 1896. “Every one of us thinks we’re the best ironworker out there-and each one works hard to prove it.”

Not every good ironworker is in the union-a truth the union is not ignoring; in fact, experienced, non-union ironworkers are on the union recruiter’s A-list.

The union is working hard to get the message out to experienced ironworkers that with union membership they gain long-term career and financial benefits, better safety standards, insurance, pension and job transferability that non-union ironworkers cannot routinely count on (www.ironworkingjobs.com).

Another group the ironworkers regard highly as ideal candidates for tomorrow’s elite workforce are the military men and women heading back to civilian life after completing tours of duty in Iraq and elsewhere. The ironworkers union works closely with the national Helmets to Hardhats program to recruit and fast track returning service people into ironworking careers. As union apprentices they can earn while they learn or – based on experience – attain journeyman status (www.military2ironworker.com).

“These people understand discipline, performance, teamwork and the absolute benefit of accountability on the job-these are the core values and capabilities we are looking for in a union ironworker,” says Marvin Ragsdale. Ragsdale is a 30-year ironworker and president of the Ironworkers District Council that governs Texas, Oklahoma, Louisiana, Arkansas, Mississippi and the central Gulf coast (www.ironworkertxmidsouth.com ).

“Military men and women come back home with self-discipline and purpose,” Mike Gravette agrees. “They will need a career, a way to make a living-and we have that to offer them.”

“It’s about having a future,” says Ragsdale. “When you’re young and bulletproof, the future is a long way off. But, it is always closer than it seems. A young person who starts building toward that future at age 18 or 28 is more certain to have a good one at age 58.”

Ron Smitherman, who heads the 1000-member plus Dallas/Fort Worth ironworkers’ local, concurs. The DFW local stretches from the Metroplex west to El Paso and north to the Panhandle. It is one of the biggest and most successful in the southwest. Smitherman has earned insight into the minds and motives of young men and women who take up the trade and become union ironworkers. He joined the union at age 18. Attracted by the incentive of doubling his earnings in one week, he gained a career he is proud of having-one that included helping build Dallas Children’s Hospital and the Sky Dome in Canada, and gave him stability and prosperity not all construction workers enjoy.