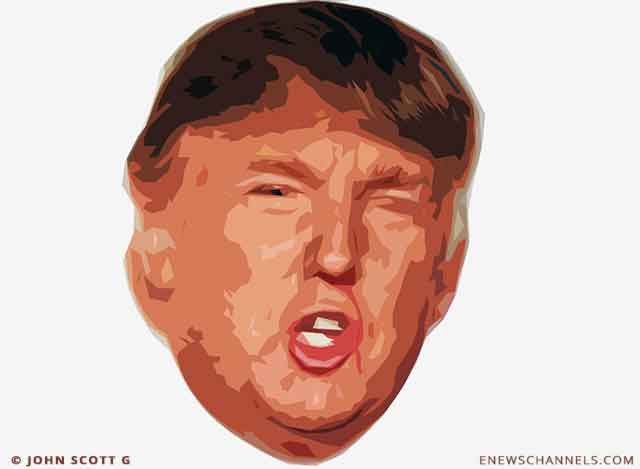 Bombastic, braggadocio, bloviating, blaring, blatant, bombastic, repetitious, unconnected thoughts, no thought, errors of syntax, incomplete sentences that sometimes– And in many other ways, terrifically outstanding is the speechifying of Donald J. Trump. It’s the best, believe me. The best. So what would happen if I wrote a column like that?

I will be the greatest political columnist that God ever created, I tell you that. I will bring back our political commentary from op-ed pages in New York, China, Mexico, and other places.

When was the last time anybody saw us beating, let’s say, China in political commentary? They kill us. I beat China all the time. All the time.

I really like Mexico. It’s a great place. The problem we have is that their translators are much smarter and sharper and cunning than our translators.

All the women in the English Department flirted with me, consciously or unconsciously. That’s to be expected. It’s just my expository style. Or maybe it’s my narrative. Expository style and narrative style — it gets the women every time. Every time.

Maybe when you write a column you shouldn’t be allowed to use the Thesaurus, because you find out what you’re getting.

I see Rick Perry the other day. He’s doing very poorly in the polls. He put on glasses so people will think he’s reading my articles. And it just doesn’t work! You know people can see through the glasses and see his eyes aren’t moving.

The new governor, Governor Abbott. I see him, he’s so vicious. He used to be a really nice guy. He used to come see me for ghost writing. All of a sudden he wants to show he’s a tough guy by writing his own statements. He’s so tough with the conjunctions and the prepositions and everything.

The concept of automatic editing was created by and for the Chinese in order to make U.S. writers non-competitive.

I’m not a fan of Jeb Bush, because Jeb Bush is a fan of common Jacqueline Susann and weak on imagination. And he’s not a phrasemaker. Who would you rather have negotiating against Random House?

They’re all nouns, no verbs, so they won’t do anything, anyway, just so you understand. They can talk all they want.

The press is very dishonest. I’ve written articles that are five times better than what they’ve got. The press never reports that. They never report that. But that’s okay.

New Book, 'When Every Bite Matters: One Teen's Journey with Food Allergies' by Olivier Deldicque Apr 2, 2019