eNewsChannels COLUMN: A lot of us enjoy art while chuckling at the art scene. Let’s face it: they often have a ton of pretention piled up against an ounce of content. So when an exhibit comes along that can tickle your funny bone while causing you to question your own existence, well, ya gotta shout about that from a few rooftops.

The constructions of Roland Reiss are unlike anything you’ve experienced. The work is physically quite small (with one notable exception; more on this later); most of the pieces are just two feet square and they live inside glass cases one foot high. But it’s not the size of the work, it’s the size of the ideas. (Well, in art, anyway.)

Reiss has conceived and built these totems, these ritualistic presentations, these odd, striking hip, neo-hip, and anti-hip totally alarming THINGS that seem to be pulsating with stories, conflicts, humor, sex, mystery, brain-teasers and the continual delicious film noir threat of lurking tragedy.

Consider this: what if you could become intimately involved in artworks produced by David O. Selznick and directed by Luis Bunuel, but shrunk down in physical size while leaving all the flourishes and socio-sexual subtexts intact? Or try this: imagine artworks scripted by David Mamet and acted out by Salvador Dali. Or the reverse. (For those born after 1990, feel free to substitute other names, perhaps people like James Cameron and Aaron Sorkin.)

Until I walked into the Pasadena Museum of California Art for the opening of “Roland Reiss, Personal Politics: Sculpture from the 1970s and 1980s,” I had little idea about art’s potential for the use of raw power. (Well, I had some idea of it; I did once see Picasso’s “Guernica,” after all.) But I didn’t know that so much clout could come from artworks that also openly embraced puns, aphorisms, word-games, mind-games, satire on human foibles, morality, immorality, science fiction, gender conflict, psychological testing, and just plain rebelliousness about life itself.

Reiss’ works can propel you to an escalated mesa of emotional and intellectual response. Let me show you how it happened for me . . .

A Play in One Act

Wow, big crowd. Kind of an oppressive wall-of-sound in the building as hundreds of voices bounce off the walls of the large gallery space. But kind of exciting, too, and it was funny to move from one work to another and hear the beginning and end of two different conversations: “He’s taking surrealism to very intimate places and // parking the car on the street fer cryin’ out loud!” Or: “When his folk-art carvings meet up with the mass-produced artifacts // things will never be the same out in San Dimas.” Or: “Not even the Dadaists handled things this brilliantly and with such // a kind of morality that we need to teach the youth of today.”

Okay, let’s look at one of these things up close. Hmm, craft and commerce and contemplation and conflict and . . . And suddenly. . . there are no more conversations in the room. There is infinite quiet and the eerie stillness you encounter in that split second of morning sleep just as the alarm goes off.

In each one of these constructions there exists a world of fun and questions and pain and intrigue and sensuality and life and death. Wait! Did that figure just move? No, it’s just my mind playing tricks. No, it’s Roland Reiss playing tricks.

I’ll just look at this one over here. Wait! Why is there an axe in that office? Wait! Why is my head spinning? Wait! Why am I receiving about nine conflicting messages at once? Reiss is some sort of magician, conjuring up hidden fears and desires that seem to layer atop one another until your eyes are darting over every square inch of these two-feet by two-feet collections of people, animals, robots, weapons, furniture, and who-knows-what-all.

Now look at this one. More human figures in rooms that are fixed in space but sometimes appear to be on liquid ball bearings. It is difficult not to make up tales about the doll-like figurines: That person is afraid of this person who is controlling that person who is unconcerned because she knows about the sci-fi monster standing right behind the wall next to the miniature binoculars and the gigantic magnifying glass. Or am I mixing them up? 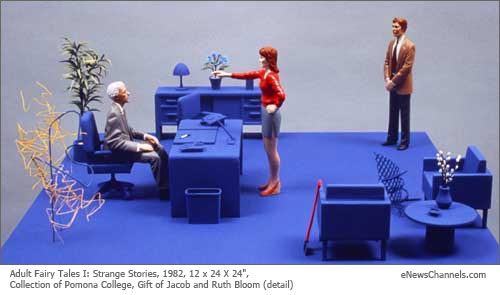 Wait! This one has no human forms. But the space is alive anyway. Energy is still racing from one corner to the other and up to my eyes. I feel as if it’s me inside that room. I’m trapped in there! No, no, I’m here. When I turn away: wham! The onslaught of human cacophony of conversations whaps me upside the noggin. But that only pulls me back into the art because now . . . I cannot fight it . . . the entire floor of the gallery appears to be one of these constructions. OhMyGodI’mInsideAGlassCase!

Too many images all at one time. Disoriented. Must focus. For a moment, I tried to remember something fun and soothing from my childhood:

Now, if you’ll only attend, Kitty, and not talk so much, I’ll tell you all my ideas about Looking-glass House. First, there’s the room you can see through the glass — that’s just the same as our drawing room, only the things go the other way. I can see all of it when I get upon a chair — all but the bit behind the fireplace. Oh! I do so wish I could see that bit! — “Through the Looking Glass” by Lewis Carroll

That brought me back under control, but only for a moment. Then came the memory of the mansion in Edward Albee’s “Tiny Alice” and the feeling of delectable danger came flooding back.

Just as a means of coping, I tried using a bit of humor with some attendees. A couple of us would be staring in wonder at one of the tableaux and I couldn’t resist making some comment like “I’m getting a strong horror film vibe from this part over here.” Y’know, just to see how attendees would react. Most people smiled in relief, as if acknowledging that we were able to free ourselves from the gravitational pull of the barrage of visual and sensitive information radiating up out of Reiss’ works. Some people just stared at me with the same look they had when viewing the piece. (You’re welcome, Mr. Reiss, glad I could help in my own small way.)

Tell Me What You See

Humor is subjective, so I tried treating each work like a Rorschach Test. “Tell me the first thing that pops into your mind,” I said to some onlookers. “Fantastic,” said one. “I don’t know what to think,” said another. “Love it,” said a third. “I’m confused,” said another. “Awesome!” said one couple simultaneously. Clearly, I have no future as a psychologist. But the gallery opening night was probably not the best setting for this experiment. Besides, I was denying myself the pleasure of letting the art reach inside me and do its thing. Or perhaps that should be plural, things, since the whole enterprise seems designed to create a synapse overload in the viewer.

For a while, I just surrendered to the art. Mind zap time. Some of the work is so packed with objects and ideas that it is akin to watching 19 TV sets at once, or at least channel surfing at an advanced rate of speed. Just as an aside, for works that are two or three decades old, they sure seem modern.

On one side of the gallery space was an 800-square-foot piece called “The Castle of Perseverance.” Essentially, it is quite similar to all the other pieces except you can step into it. (Cue ominous music here.) And the transformation that I felt earlier is now completed in a different way: I became part of one of the art works. And so did the woman ogling the particle-board sofa. And so did the guy ogling the woman’s legs. And so on. Yup, here we were, creating our own dynamic, our own stories, and harboring our own secrets, just as in all the other works on display.

There is an 80-page full-color catalog of the exhibit and I recommend getting it. Sleekly designed by Jill Sykes, the images will let you recall what moved you the first time you saw the works. Her choice of detail photos is excellent, giving your mind a little nudge as if to say, “Don’t forget about the ray gun in ‘The Gravity Observations: I Keep Wondering,’ just lying there on the table with the mysterious chalk notations.” Or “Yes, that is a shark in ‘F/X: In Search of Truth,’ hanging from or about to devour a stepladder.”

A word on the plates in the catalog: I don’t think there is any way to photograph those works such that flat images truly capture their physical presence. Even with 3D, I am not certain you’d be able to recreate the full effect. These things contain drama so palpable that you begin to feel it even when you are several feet back from the protective glass. (Perhaps for the first time in art history, the glass cases seem to be part of the work.)

However, the images in the catalog will bring back a lot of the awe experienced when seeing the works “for real.” Yes, I put quotation marks around those words. I mean, y’know, the whole damn exhibit makes me question the meaning of every room I have entered since seeing Reiss’ mini-cities of the mindscape.

But for this review, I’d change it up a bit: The visual effects promote bittersweet but realistic and authentic and funny and frantic and frightening and fabulous notes that transcend the obvious nature of reality.

Article is Copr. © 2011 by John Scott G – all rights reserved. Originally published on and Copr. © eNewsChannels.com. Images courtesy Jill Sykes, designer of the exhibition catalog and friend of the artist; used with permission.