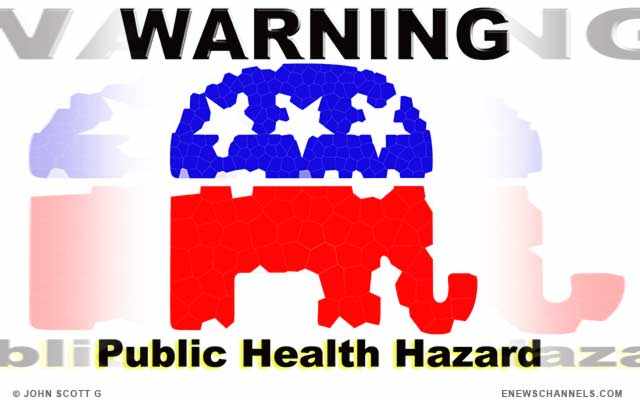 What if politicians in the Party of Stupid had to be labeled with the same type of warnings as household appliances? (Note to Conservatives: A sense of humor may be required for enjoyment of this article (not to mention a heart, a soul, and an I.Q. above 80).

We were moving down the aisle in the supermarket. “Look,” my companion said, “the label on this jar of peanuts has a warning to people with peanut allergies that this product contains peanuts.”

“Well,” I replied, “you could hardly expect them to put seat belt warnings or alcohol consumption warnings on there.”

Various jokes naturally followed. “Warning: Do not use toaster in swimming pool.” “Warning: Stove will be hot when in use.” “Warning: When you see fire-breathing dragons attacking giant liquid-metal robots, it’s just a movie or a video game, not real life.”

We grew tired of this, but then one of us mused, “What sort of warnings should be printed on Republicans?”

In addition to the all-purpose one that applies to every Republican — “Right-wing nut-jobs are harmful to America” — here are a few suggestions for warnings that should accompany some of the conservatard hordes who always want to stand up for the wealthy while making life worse for everyone else:

DONALD TRUMP
As a prank presidential candidate who is flirting with Fascism even more than Republicans normally do, the Trumpster needs warning signs for all public appearances. Suggested wording:
Unrecycled flush water — Unsafe for human consumption.

TED CRUZ
As one of the most blatant of the crypto-Nazi presidential candidates, the warning will have to be bi-lingual. Suggested wording:
Gefährlich für die Demokratie. (According to Google Translate, it means Dangerous to Democracy.)

PAUL RYAN
The Ayn Rand “I’ve Got Mine, Screw You” Speaker of the House needs a warning on his speeches as well as his proposed legislation. Suggested wording:
Laws of mathematics do not apply.

MARCO RUBIO
In addition to being a vapid, vacillating little twerp, this Ken Doll of a presidential candidate needs a special warning label. Suggested wording:
Not anatomically correct.

MITCH McCONNELL
The treasonous Senate Majority Leader is so odious that his warning announcement is longer than the others. Suggested wording:
Hazardous for use while showering, bathing, swimming, sleeping, walking, driving, reading, writing, standing, exercising, breathing…

BEN CARSON
The narcoleptic presidential candidate requires this warning:
Exposure may cause drowsiness. Do not operate machinery after use.

KEVIN MCCARTHY
The philandering House Majority Leader needs the following warning:
Shin pads cannot protect any part of the body they do not cover.

CHRIS CHRISTIE
The presidential candidate and Macy’s parade balloon has such an obnoxious manner that he often serves as his own warning announcement, but we still suggest:
Object in mirror is larger than it appears.

JEB BUSH
The presidential candidate with all the appeal of a broken wind-up toy, the character I call “Jebbush” should come with this notation:
Yawn, may cause… zzzzzzzzzzzzzzzzzzzz.

JOHN KASICH
Someone said he is the governor of Ohio but this has not been independently verified. Warning:
Suitable only for the perpetually puzzled.

MIKE HUCKABEE
This con man and huckster is also a RWNJ candidate who appeals to the great unwashed. Suggested warning:
Found to cause cancer in laboratory mice.

STEVE KING
The Representative from Iowa is as infamous for his racist comments as for his stupid observations.
May be a poor judge of produce, especially cantaloupes.

CARLY FIORINA
After nearly tanking Hewlett-Packard and trying to destroy the lives of 30,000 of its employees, this scumbag needs several warning signs, but let’s go with a bit of Dada:
Not intended for use as a dental drill.

DARRELL ISSA
Accused of car theft on multiple occasions, this rightwing nutjob bloviator is a danger to residents of whatever community he’s in at the moment. Suggested wording:
Use of this product may result in brain damage and loss of eyesight.

“Time out — loss of eyesight?”

“Yeah. Have you ever seen Darrell Issa?”

“Oh you’d know. He looks like Charles Krauthammer on a bad day.”

Okay, back to our regularly scheduled column already in progress.

JONI ERNST
Lover of pig entrails, the phony Joni should be accompanied by this warning:
Objects in Senate more dangerous than they appear.

LOUIE GOHMERT
We do not wish to cast aspersions on his asparagus, but everything about this mental-patient-off-his-meds should be accompanied by this warning:
Stupid is as stupid does.

STEVE SCALISE
As a certified racist serving as the GOP House Majority Whip, he brings his own white sheets with him wherever he goes.
Bigot is as bigot does.

RNC
And now we have come full circle to the warning that applies to every Conservative as well as the entire Republican Party:
Contains racists, homophobes, xenophobes, misogynists, plutocrats, theocrats, and neo-Fascists — product is hazardous to morality, decency, and Democracy.

This opinion piece is Copr. © 2016 by John Scott G and originally published on eNewsChannels.com – a publication of Neotrope® – all commercial and reprint rights reserved. Some elements use satire to make a point, and not all references to anonymous people or fictional characters should be assumed to be based on fact. Illustrations by and © JSG. Opinions expressed are solely those of the author.

New Book, 'When Every Bite Matters: One Teen's Journey with Food Allergies' by Olivier Deldicque Apr 2, 2019

For 2019 YourNovel.com Romance Novelists Profile Valentine Shopper Types: Are You the Procrastinator, the Overachiever or… Jan 23, 2019

REPORT: Exactuals is transforming entertainment-industry payments poised for wide use by insurance firms May 29, 2019