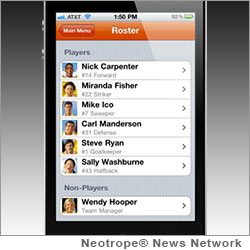 BOULDER, Colo. /eNewsChannels/ — TeamSnap, Inc., a mobile and web service used by almost a million and a half players, parents and coaches to manage sports teams and leagues, announced that mobile device users now generate over 50 percent of the company’s daily visits.

While the company started with a web-only platform, the company crossed the magic threshold where it is now more of a mobile solution than a web-based one. In June the company’s mobile app for iPhones and iPads was used 650,000 times, representing 32 percent of the total TeamSnap visits for the month. The Android app and mobile device users accessing the website represented the other 18 percent of visits.

“Players, parents and coaches are using their mobile devices to manage their lives, and this in turn is driving explosive growth of our mobile apps,” said David DuPont, TeamSnap CEO. “We launched the iPhone app with little fanfare in Dec of 2010, a mere 19 months ago, and now it is about a third of our visits. The Android app is on almost exactly the same trajectory. That and the fact that iPhone visits are still growing rapidly tell us that mobile devices will soon be the overwhelming platform of choice for people using TeamSnap.”

Due to this dramatic shift towards mobile devices, TeamSnap also announced that it is working on extending the features specifically for coaches and team managers in its mobile apps. The goal is to allow coaches and team managers to perform all key team management functions right from the field, gym, or rink. For example, TeamSnap will add the ability to change the schedule, track payments, and update team contact information all while on the go. In addition, it is working on an iPad-optimized version of its app.

TeamSnap is an award-winning mobile and web service for managing recreational and competitive sports teams and groups. With a simple but powerful interface, TeamSnap makes it easy to keep track of Rosters, Schedules, Game and Practice Attendance and Availability, Team Payments, Statistics and much more. Comprehensive messaging functions keep everyone in touch, and with a strong focus on usability and simplicity, TeamSnap is software that people actually find fun to use.

With enthusiastic customers in 135 countries, and teams representing over 100 different sports as well as non-sport groups, TeamSnap has quickly become the fastest-growing team and group management solution on the planet.

TeamSnap Raises $5.5M in Funding as Sports Activities Begin to Resume May 26, 2020