eNewsChannels COLUMN: On the surface, this is a book about combat, both personal and professional. But while there are plenty of scenes with bloody battles, all of which are shocking and gripping to read, you will also find humanity, philosophical questioning, and ultimately the cleansing elation of personal redemption. 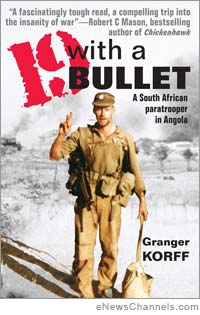 “I decided not to kill him and turned around and walked away.” The line comes late in the book, but it leaped out at me when reading this powerful and moving work, probably out of relief after having been thrust into so many confrontations throughout the journey.

You can take this exciting ride from an armchair or while propped on a pillow, but I don’t recommend reading it just before retiring to bed for the night. Emotions run very hot and heavy throughout these pages. Your view of the entertainment aspect of the piece will depend on your tolerance for carnage.

You can tell most of the players in the book without a scorecard, but it may take a little extra effort to follow all the political implications of the war between South Africa and numerous forces in Angola. To help, there are maps and a brief prologue regarding SWAPO, FAPLA and several other acronyms. Plus, you’ll learn about what happened when Portugal abandoned its 400-year colonization of Angola, which allowed Marxist-backed forces fighting in South West Africa, or Namibia, and, and… And you know what? I’d have to go back and re-read the prologue in order to accurately finish that sentence.

But none of that matters once you’re involved in the story of Korff, just nineteen, as he goes through hell-on-earth for two years of physical and emotional torment, anguish, pain, and eventual enlightenment as a human being.

Forged under fire and written as catharsis, “19 with a Bullet” is tough as titanium and full of fear, bravery, horror, and ultimately, insight. What you find here is the prose and poetry of gunshots.

Why join the military, you might ask yourself. Writes Korff, “I couldn’t face my parents, either over the issue of bunking [skipping class] or the other small matter of diddling the English teacher, so I chose right there …not to go back to school.” One thing led to another and he was in uniform. With interesting timing…

Since the sixties, South Africa had been dealing with an ugly conflict on her northern border. It had started off in a small way with a few isolated landmine incidents and the odd abduction here and there, but over the last six or seven years had erupted into a full-scale little war.

As it turned out, he was in on the action that greatly expanded that little war.

Korff writes with menace. While there are flashes of beauty in his words, he primarily relies on a straight-to-the-point style. Like this sentence: “It was a good machine gun, but you had to keep the damn thing scrupulously clean or it would jam on you.” Or this sentence: “His main weapon was his mind and a cold, piercing stare that could bend spoons.”

The thought process of the on-the-ground soldier may not always be philosophical, but it often is with Korff, as you can see as he muses about an upcoming attack on SWAPO, the South West Africa People’s Organization, a hated faction backed by China and the then-Soviet Union:

I started thinking stupid thoughts like putting myself in SWAPO’s place . . . I wondered what they were doing now and whether they knew that tomorrow their world was going to be blown apart. It was like knowing someone’s future — what was going to happen to them; secrets they did not share — like sitting facing forward in a train and seeing the guy facing the future backwards.

Sometimes things get graphic enough to make you widen your eyes, and the descriptions are as effective as exploding shrapnel, yet Korff puts you in touch with the full range of sensations:

Dark ominous rain clouds loomed high in the distance and a low thunder that sounded like far-off artillery rumbled in the west, signaling the beginning of the rainy season. A fresh breeze had sprung up, blowing in cool air that tasted like iron…

There is killing, maiming, and more killing throughout the book: “I was surprised by my cold emotion,” he writes. “I had shot somebody. Aren’t you supposed to feel something? I thought perhaps it would sink in later.” And he was right. . .

“In the early morning chill, the hot contents of his head sent up a thick white cloud of steam as if someone had emptied a bucket of hot water onto the cold sandy ground. The vision would stay with me for many years.” It is that human perspective that makes it all worth reading, even when there is an evil bit of humor that wriggles to the surface: “…he looked peacefully asleep, albeit without the top of his skull.”

Many sections of the book deal with the bush fighting and the ground action that took place after being helicoptered across the border and well into enemy territory. If hand-to-hand gun battles are your thing, you’ll have plenty to enjoy here.

There is also a section of the book devoted to his court martial for beating the bejesus out of a sergeant-major who had killed some pet cats. (Korff gets off, kinda-sorta, but not without quite a lot of pain and suffering.)

The perspective of battle, especially with the larger operations, is from the closed-in view of a single soldier, including the lonely terror and painful doubts as well as the bravery and resolve. Sometimes the SNAFU aspect of the armed services can be funny, as when Korff is listening to a radio broadcast “assuring everyone in South Africa” that their troops “had been safely pulled back out of Angola days ago (we were still some distance inside Angola at the time).”

There was a terrible price to pay for his military service. “The spirits of spilled blood manifested themselves in the strangest and most perverse ways…”

Making love to my wife I would see her as a terrorist we had left dead in the sand. In a moment of tender thought of a loved one or family member, I would see that loved one in my mind’s eye shattered, broken, shot to pieces like the men we had killed.

For many reasons, I keep returning to that one sentence: “I decided not to kill him and turned around and walked away.” This is the sort of line one expects to find in a detective novel. But in “19 with a Bullet,” the line is very real. And there are a lot of lines like it that are both powerful and scary. Certainly, this is why the book delivers the jolts that people seek from military literature.

For me, the balance between contemplation and conflict is the true measure of the worth of this work. After the bullets have stopped flying, the bombs have stopped falling, and the helicopters and jets have stopped roaring overhead, there is reverie and peace. And it is glorious.

Article is Copr. © by John Scott G and originally published on eNewsChannels.com – all rights reserved. Disclosure: no fee or other consideration was provided to the author of this article, this site or its publisher by the book’s author, publisher or agent(s).