CHICAGO, Ill. — Cameron McCandless, U.S. Marketing Director of FRED Distribution, Inc. announced this week that the popular book and public television character, Arthur, embarks on a mission to “go green” in a new award-winning children’s board game – Arthur(TM) Saves the Planet, One Step at a Time. And, the release of this new game coincides perfectly with National Games Week – November 16 to 29. Arthur Saves the Planet aims to inspire children six years and older to take simple steps to care for the environment, in short, to go green. This environmentally-friendly board game has also won the Preferred Choice Award from Creative Child Magazine and is endorsed by PBS Kids. 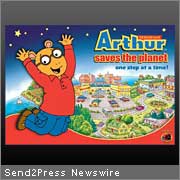 This, the first Arthur board game ever produced, is fun and educational. “We wanted to teach kids to be environmentally-conscious without them necessarily being aware of it,” co-producer Rick Soued, President of FRED Distribution, says.

FRED Distribution developed the game with Sophisticated Games of Cambridge, England and author, Marc Brown, who penned the Arthur series 30 years ago.

In “Arthur Saves the Planet,” Arthur, along with friends and family, work to address environmental issues that threaten his hometown of Elwood City. From littered beaches to endangered tree frogs and deforested parks to dripping faucets, the team has lots of work to do!

Players pick a character and collect colored-resource cards that represent time, expertise, friends, effort and advice. The players then solve the challenges with their resource cards and, in return, receive tree seeds to help restore Elwood City to its natural beauty.

As reported on the educational web site and blog – Oxford Learning – “Games are an ideal tool for learning, promoting decision-making, anticipatory skills and risk-taking.”

John Haskill, history teacher in Griswold, Conn., who sponsors a game club at his school, says, “Board games require children to strategize and develop a sense of consequences. There’s some thinking ahead going into it; there aren’t instantaneous decisions.”

Today in the U.S., game playing among families and groups of friends is gaining in popularity. It’s catching up with Europe where game playing has been a social and educational vehicle for decades. Game clubs are now commonplace at schools, and regular game nights, like gourmet dining and book clubs, have replaced somewhat nostalgic Bridge-playing nights.

So, when a mainstream, highly-recognizable figure such as Arthur takes aim at some of the most pressing environmental issues of our time – global warming and resource management – families with children will sit up and take notice. Together, they can learn new behaviors. They may learn to turn off the lights when they leave a room, or be inspired to plant a tree. And, during the process, they might just save the planet!

There are two sets of rules, for two to five players. The first set is designed for ages six and up and the second set is a cooperative set of rules for ages four and up; playing time is approximately 40 minutes.

For more information about Arthur(TM) Saves the Planet, One Step at a Time, visit: http://www.freddistribution.com/control/rcn?p=arthur .