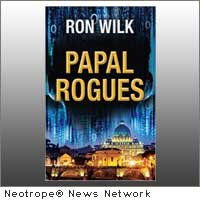 BOCA RATON, Fla. /eNewsChannels/ — Ron Wilk, author of the thriller “Papal Rogues” (ISBN: 978-1936183029), will be appearing on Lifetime Television’s, The Balancing Act, on Monday, August 30, 2010. The national morning show, which airs from 7-8 a.m., will feature Wilk’s inspiring transition from neurologist to novelist and offer his compelling tips on how to create a successful and fulfilling “second act” of your life.

“Figuring out how to rebound from life-altering circumstances is a dilemma that many people face at some juncture,” explains Wilk. “Whether it’s loss of a job, loss of health, loss of a loved one, or a myriad of other challenges, at some point life as we knew it will come to an abrupt halt and we will be left wondering how to go on.”

For Wilk, his need to figure out a “second act” for himself came about after a disabling fall down a flight of stairs. In too much pain to continue with his thriving neurology practice, he initially dealt with an amalgam of negative emotions.

“From depression to lack of self-worth, I ran the gamut of feelings,” he states. “But as a physician I knew the importance of seeking out something new to challenge me and stir some positive feelings.”

As the result of a serendipitous journey, Wilk discovered his love of writing, especially in the thriller/mystery genre. His first two books, “Red Death” and “Kerberos,” were released on the Internet and have had over 950,000 downloads to date. These free downloads can be accessed at www.ronwilkfiction.com .

This success led to “Papal Rogues” which was released a few months back by Langdon Street Press. “Papal Rogues” explores the secret world of computer hacking and opens with the murder of a young hacker who discovers something that was meant to remain hidden. As the dramatic “what if” scenario unfolds, Wilk takes readers on an adrenaline pumping ride that draws them into the clandestine underbelly of international corporations, the U.S. military and most surprisingly, the Vatican. “Papal Rogues” is available at Amazon.com in soft cover and e-book for Kindle as well as all major booksellers.

To learn more about Ron Wilk’s books and his blog about creating the Second Act of your life, please visit www.ronwilkfiction.com .

Macrostax, the #1 Macro App, Celebrates Fifth Anniversary with $17M in Lifetime Revenue May 4, 2022