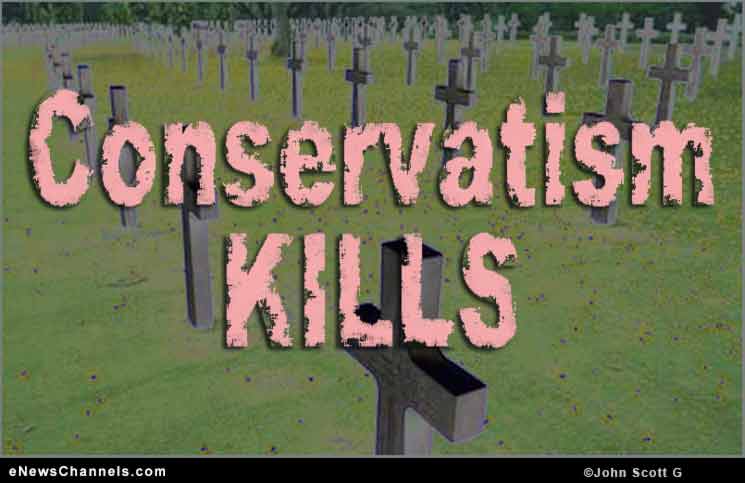 The policies, positions, and practices of Conservatives can be immensely helpful to you — assuming you’re a wealthy person or a corporation. But for the vast majority of people, Conservatism is an evil pestilence that leads to pain, disease, starvation, and the breakdown of everything valuable that should accrue to you from living in a civilized society.

In today’s sermon, we are not going to discuss the myriad ways Conservatism is merely harmful to you. Certainly their policies are injurious to your family and destructive to America — but everyone with an I.Q. above 80 already knows that.

Nor will we go into any detail about the GOP obscenity of supporting income inequality and allowing money to distort the electoral process. We will also overlook their refusal to support legislation to end tax breaks for corporations that ship jobs overseas. And their refusal to support a bill to allow students to refinance their student loans. And their rejection of a bill to require that millionaires pay at least 30% minimum tax rate regardless of tax loopholes and accounting gimmicks.

Or their opposition to a bill to raise the minimum wage above today’s poverty-rate of $7.25. And the bill to repeal subsidies and tax giveaways for Big Oil. Or the bill to require shadowy groups to disclose donors who give in excess of $10,000 as political contributions. And the bill to allow new Americans brought here as minors to avoid deportation to their now-foreign countries of origin.

No, we will set all that to one side in order to consider a few things they do that are even more dangerous to your health. Today we will concentrate on some of the ways Conservatism kills. Herewith a brief list:

Conservatives have railed against the idea of protecting Americans in their senior years ever since the idea was first proposed. One of the finest examples of how socialism dovetails with the goals of democracy, Social Security has helped ensure a safer retirement for every generation. In the GOP attempts to curtail it, constrain it, pervert it, or cancel it, the republican hordes reveal themselves to be true haters of America and Americans. They want to create havoc by attacking the finest social program in the history of our nation. Their pernicious goals would cause pain, suffering, and death — but that matters little to Conservatives. By attempting to destroy or sabotage Social Security, they seek to hurt your grandparents today, your parents tomorrow, and you upon your retirement.

2) CONS vs. Healthcare: Don’t Get Sick

One day someone will total up the human misery Conservatives caused by refusing healthcare to millions of people in states controlled by republicans. Among the litany of suffering will be a death toll, all of it resulting from republican troglodytes withholding the Medicaid expansion for poor citizens and refusing to set-up health insurance exchanges under the Affordable Care Act. Their unconscionable cruelty dealt a double blow to many communities where small hospitals and clinics were forced to close because their existence depended on Medicaid payments.

3) CONS vs. Vets: No Support for Wounded Warriors

It took a nationwide scandal blaring across broadcast news to shame republican thugs into voting for appropriations to the woefully underfunded Veteran’s Administration healthcare program (underfunded because of the influx of wounded warriors from the two unnecessary wars conducted by the Bush/Cheney presidency). Decent people can disagree on the extent of our commitment to necessary wars but only Conservatives are evil enough to withhold funding to treat our returning wounded. And the GOP is still on record as opposing a bill to expand veterans’ access to health care, education and job training.

4) CONS vs. Necessities of Life: Don’t Eat or Drink!

From the moment you wake up until the moment you fall asleep at the end of the day, you are at the mercy of mountebanks, charlatans, and criminals who want you to breathe polluted air, drink befouled water, and consume tainted food.  Or you would be were it not for regulatory agencies working hard to prevent any number of fast or slow painful deaths from contamination. In their constant battles against regulation of air, water, agriculture, meat, dairy products and everything that affects them, Conservatives show no concern for human life. Profit is their god. Greed is their credo. Ask the residents of townships where unregulated industry has tainted the groundwater if they like the results of drinking poison or bathing in it and you get an idea of what life under Conservatism is like.

5) CONS vs. Medication: How Dangerous is Your Medicine?

By continually resisting sane regulatory policies in all industries, Conservatives are misguided at best and evil at worst. They think your medications should become a form of Russian roulette. “Is this pain pill tainted?” you may wonder. “Don’t worry about it,” CONS tell you, “the marketplace will decide the value of all products.” What about medication for your heart? Your cholesterol? Your blood pressure? Your thyroid? What about drugs for diabetes, asthma, heartburn? Next time you take any medication, ask yourself how confident you’d be that the drug was made properly if Conservatives had been successful in removing regulatory oversight.

Conservatives blocked a bill that would have ensured background checks on all gun purchases. Every normal American favors such a bill. All responsible gun owners favor such a bill. Only politicians in the grip of the gun manufacturing cartel (read: NRA) oppose such common sense legislation. Carnage continues as a result of their perfidy.

7) CONS vs. Earth: They’re Working Hard to Kill the Planet.

Fossil fuel companies deny the harmful effects of climate change (and often deny the fact of climate change itself) and so the Conservative cabal takes their bribes (oops, I mean campaign contributions) and parrots those same idiotic positions. It would be one thing if this was a debate but as 350.org clearly demonstrates (to name just one source), there is no debate on the subject: we are inexorably destroying the atmosphere that supports human life. Progressives recognize the facts and wish to act to save humanity; Conservatives ignore the facts and don’t give a damn if future generations wither and die.

True, this is not literally a killer but it supports all their other odious activities so we’re going to append it to the end of this list. With a constant spewing of false statements, wacko conspiracy theories, distortions, and just plain made-up crap, the conservative cabal is atrophying the mind of anyone who is exposed to high levels of their filth.

It’s not just the non-stop propaganda of the Fox FakeNews channel. Phony “think tanks” such as Cato Institute, Heritage Foundation, Manhattan Institute, American Enterprise Institute, FreedomWorks, Focus on the Family, Center for the National Interest, and the National Center for Policy Analysis (any many, many others) regularly churn out tons of bogus reports, falsified studies, skewed research, and prevaricating papers.

And the whores in their employ regularly bloviate their lies in speeches and over the public airwaves. Anytime you see one of their be-suited dweebs vomiting their bile you know that somewhere a lot of Fascist-worshipping billionaires are cackling with perverted glee. When you do not speak out against this outrage, you serve to support it. Which means you’re supporting the right of the rightwing to harm your fellow Americans. Which means you are helping Conservatives continue to kill. 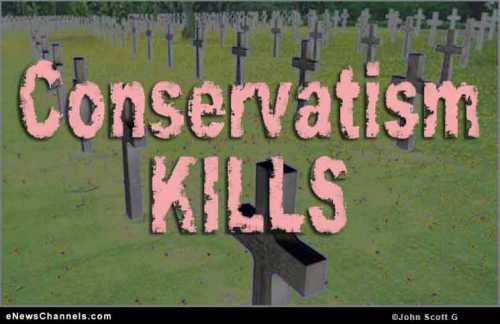