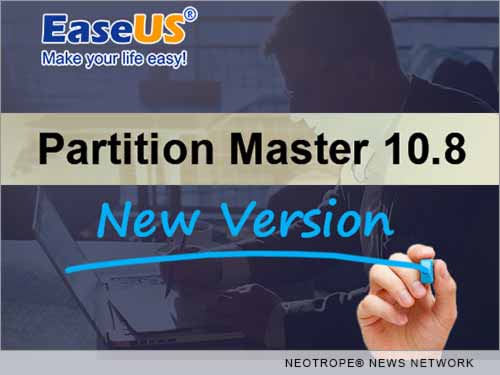 NEWS: EaseUS has launched new Partition Master 10.8 version, a professional hard disk space manager. Besides updates of fundamental and key features from its predecessors, significant breakthrough is achieved in this 10.8 edition on converting system disk from MBR to GPT disk. Likewise, improved user-friendly interface is pretty much trouble free for better user experience.

In response to rapid increase in data and information, large storage capacity are required to keep all files intact and safe. In the past few decades, MBR disk is gradually replaced by GPT disk which works with disks far more than 2TB in size. MBR (Master Boot Record) and GPT (GUID Partition Table) are two different ways of storing partitioning information on a hard drive. However, it can only handle disks with no more than 2TB of space. In contrast, GPT disk allows for a nearly unlimited amount of partitions.

The versatile GPT disk also associates with UEFI which replaces the clunky old BIOS. Windows can only boot from GPT on UEFI-based computers running 64-bit versions of Windows 10, 8.1, 8, 7, Vista, and corresponding server versions. Therefore, the MBR-based partitioning scheme is in the process of being superseded by the GPT scheme in new computers. As for limitations of MBR, Modern computers using UEFI are going away from MBR support. When setting up a new disk on Windows 7/8/8.1/10 or Windows Server editions, it’s very obvious for the result about the choice between MBR and GPT.

EaseUS provides professional IT solutions for home, education and SMB users, service providers in data recovery, backup, system optimization and partition manager on both Windows and Mac platforms. Founded in 2004, EaseUS has established itself as a fast-growing international company with over 100,000,000 wonderful users in the world. For more information, please visit http://www.easeus.com/.

Tenorshare Announces The Best Duplicate Files Finder and Remover for Windows in 2022 Mar 10, 2022