eNewsChannels COLUMN: Two monumental novels, one phenomenal idea to save America, and a river of lysergic acid diethylamide. For some people, that is the legacy of Ken Kesey, but in the hands of neo-new-journalist Mark Christensen, the tale takes on mythic proportions and is One Hell of a Great Ride. 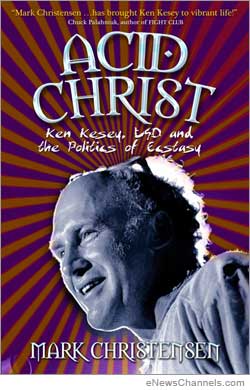 Reading “Acid Christ” is like taking a bath in slashing images. The words come tumbling at you at such high speed and with such twisted evil grace that you can either luxuriate in the onslaught or take yourself back to re-read passages for the pure joy of the verbal rollercoaster ride.

Mark Christensen, who grew up around Ken Kesey, surveyed today’s literary scene, took note of the pinnacles of success achieved by new journalism and gonzo journalism, and said, “What’s next?” The answer turned out to be a publisher who said how about a participatory biography? Christensen would take aspects of his own life and present them in parallel or even entwined with his subject.

Oh right, I thought. Forgive me, but I was a big doubter at first. It didn’t seem like that was a worthwhile approach, but I was wrong. It works spectacularly well. True, “participatory biography” is not a very sexy term, but perhaps it would have been difficult to distribute the book if they called it a “freak-flag psych-out bio” or a “hyperbolic lunatic extravagance of a biography.” Under whatever phrase you like, Christensen takes the idea and runs away with it through the use of emotion-packed writing that may be the closest any of us will ever come to experiencing psychotomimetic visions without the aid of chemicals.

For many people born after 1980, all they know about Kesey is when they were forced to read “One Flew Over the Cuckoo’s Nest” or “Sometimes a Great Notion,” and few people react well to being coerced into considering great works of art. But not only are the books monumental, so was the man. Christensen sees all sides of Kesey.

As one example, here is Kesey speaking in favor of decriminalizing and taxing Oregon’s estimated $500,000,000 in marijuana sales:

“I mean, if there are $500 million moving around under the surface of this state, that money is passing back and forth and there’s no day care centers being built off that money. There’s no chuck holes being fixed with that money. That money is untouched. And if you check it out…you’ll see that at the end of the line are some big, bad guys. And with $500 million in illegal funds moving around, if we don’t begin to attract the Mafia from Las Vegas, then they’re not the Mafia I’ve grown to love and respect.”

That was pure Kesey, presenting a great idea but capping it with a joke that left a few folks scratching their heads. On the other hand, Christensen provides this overview of the man:

As down-home as an outhouse, erudite as a cow college Nabokov, flamboyant as a redneck Liberace, Kesey had less a writer’s than wrestler’s personality. Not the stoic Greco-Roman variety, but the WWF Smackdown kind. A frustrated actor, not unlike many other WWF superstars, it was probably no accident that he entered the art world by way of the theater. Yet, you could argue that he was, at least early on, a much more technically adroit writer than James Jones or Jack Kerouac, and certainly much more self-consciously aware of where the buttons and levers were placed on the literary myth machine.

Christensen points out that Kesey viewed large portions of the United States as “buttoned-down rats in a corporate cage,” all of whom needed to “eat from the Tree of Divine Psychosis.” Fortuitously, Kesey met up with Augustus Owsley Stanley III, who manufactured acid in an assembly-line fashion that enabled Kesey to move forward with “a loony-tune, dose-the-cosmos loaves and fishes program to make LSD the new ‘Breakfast of Champions.'”

The drug and the lifestyle seemed so full of promise, with everyone who took acid being able to channel Einstein, God, and the Kama Sutra. But alas, this was not to be, although some of the failure to communicate resulted in humor or outrage or both. One scene of destruction involved Kesey attending a meeting of the Black Panthers and Jean Genet (already an intriguing combination) while he, Kesey, was attired in an open-front shiny paisley puff-sleeve blouse. The meeting goes very wrong very fast.

Bend in the River

Perhaps the saddest aspect of the Kesey saga would be the collapse of his magnificent seventies movement called Bend in the River (which has the somewhat heartbreaking acronym BITR):

As manifestation of perhaps the greatest idea he ever had — a radical new “people’s democracy” created by shifting political power away from politicians to statewide referendums whose merits and shortcomings would be broadcast and debated on television and then voted on by ballots published in statewide newspapers — “Bend in the River” was truly revolutionary.

LSD for the USA

As much as moralists and prigs might bemoan it, there is a case to be made for lysergic acid diethylamide (LSD). It’s why the U.S. government first explored it. It’s why they recruited Kesey to try it.

Say what? Yes, “US Government inspected LSD… Your tax dollars at work.” Christensen hits some of the low and, ahem, high points of this strange and twisted history, including when “CIA agents had San Francisco prostitutes lure unsuspecting men to an apartment where they were given drinks dosed with LSD and then encouraged to attempt sex….” Christensen goes on to observe that “Psychedelia may owe its life to CIA super-spook Al Hubbard, ‘the Johnny Appleseed of Acid,’ who, while Tim Leary was still parsing Ovid for Undergraduates, was tripping out of his crew-cut mind…”

Of course, it’s not just LSD in the book. There are lots of descriptions of the use, misuse, sale, and altered states of a whole batch o’ stuff. Christensen writes, “Boyd Harris, who was Kesey’s freshman roommate, recalled, ‘I turned him on to Lord Buckley and jazz; he turned me on to IT-290, peyote and marijuana.'”

Since I know you’re curious, IT-290 is another name for alpha-methyltryptamine (AMT), a synthetic psychedelic and euphoric stimulant. (What’s that you ask? No, not me; I had to look it up in a medical dictionary.)

Christensen takes chances by diverting readers to take a few scenic detours, which means Kesey is not center stage for large portions of the book. One example of this is a 9,000+ word section entitled “California Girls,” in which there is only a single mention of the man. There’s little mention of the politics of ecstasy in there, either. Not that there will be many complaints about this since there is ample exploration of another form of ecstasy.

Still, if you’re expecting all chapters to be about Kesey, acid, and/or his Quixotic political movement, you may not be as delighted as I was about the pages devoted to Jack Kerouac, Timothy Leary, Jerry Garcia, Robert Stone (author of the powerful novels “Dog Soldiers,” “Hall of Mirrors” and “A Flag for Sunrise”), Bill Graham, Paul Krassner, David Crosby, and more than a few other fascinating folks who do not have as much name recognition but whose stories are full of wow! and even WTF! moments.

Christensen praises Kesey’s writing using magnificent language of his own. In one section, he compares “Cuckoo’s Nest” with the Bible, “On the Road,” “A Clockwork Orange,” and “Catch-22.” He points out that “Writing a novel is like juggling bowling balls and soap bubbles — you’ve got a variously weighted self-invented cosmos to keep rolling toward meaning. Kesey juggled and rolled like crazy.” Christensen’s prose also rolls:

Yet here was a psychedelic heaven. Right here, right now. A heaven, even better yet, providing an ecstasy God himself wouldn’t allow in his: Sin. Instant gratification by way of sex, drugs and rock and roll. And the medium — medicine man messiah Kesey, would be the message.

Or take this go-for-broke depiction: “…six-three dental floss-thin highly talented and discriminating (‘I like some of the Mona Lisa, but not all of the Mona Lisa’) 22-year-old, suave, lady’s man art director James Kiehle.” Don’t know about you, but boy-oh-boy, what I wouldn’t give to have a terrific writer like Christensen describe me like that.

Kesey’s decision to avoid writing great novels, or even writing much of anything at all, is handled from various perspectives. One scene shows him breaking into silent tears. Another deals with his ego. . .

In the new multi-media world in which celebrity-hood was already on the chopping block, cut in bits and pieces by a television-led universe that daily allotted less and less time to more and more people, Kesey…wanted out of the novel-writing business and into the Ken Kesey business.”

Which meant happenings, acid parties (well-chronicled in Tom Wolfe’s “The Electric Kool-Aid Acid Test”), and a movie that never got completed but which has an estimated forty miles of footage, most of it out-of-sync. Here are a couple more of Christensen’s pithy observations: “Making a great movie about the wonders of acid while on acid is tough” and “What a difference a daze makes.”

Still debating whether you want to give this book a try? Consider: What if you could find a writer who can make adjectives more adventurous, verbs more vibrant, sentences more sinewy, and paragraphs more propulsive than most everything else you read? You’d want to check out his stuff, right? Well, this is your chance. Hell, this guy sometimes even uses commas in creative ways. Here is just one of many fantasy fever passages:

…hookah dream Love Children, hallucinatory hot house flowers, the ethereal apples of our four eyes from the new Eden, a kosmic step up on the ladder from the clerk-eyed, bourgeois, capitalist roader Beaverton High Barbie Dolls who, on their way to score a suburban Dr. Rich McDreamy, had availed us (or not) of their favors.

Or take this paragraph, a top speed reverie referring to the automotive adventures with his friend Moon and a girlfriend known as Ms. America:

I’ve driven dragsters so fast they’re stopped by parachute and ridden with blind drunks like Moon who play bumper cars with bridge abutments, but behind the wheel at night, she made the world a video game, everything in front of us, wham! Nothing but slashing lights and fiery blobs; too fast was rarely fast enough. There were no brakes in a Ms. America car, only gas pedals. A delicate hand atop the steering wheel, she’d fly into curves while diving into her handbag to look for directions. Maybe she had eyes in her knuckles, but I was impressed — Mario Andretti and Jeff Gordon may shoot through S-turns at 90 mph, but not while rummaging through their purse. A rough-draft Danica Patrick before Danica Patrick — but sadly, you can’t make an omelet without breaking eggs and, once she crashed.

This work should be seen and discussed. Look, I enjoy books that stick to factual writing, or poetic writing, or expository writing, or speculative writing, or experimental writing, and so on. But you will find all of those styles in “Acid Christ,” sometimes even on the same page. I have marked about 50 paragraphs as examples of writing that made me grin. Even now, after finishing this little appraisal, I am happy to go back and re-read these passages for the pure enjoyment of taking the idea-slide-word-glide this guy creates. Plus, now I get to write a one-word review I thought I’d never write: Groovy!