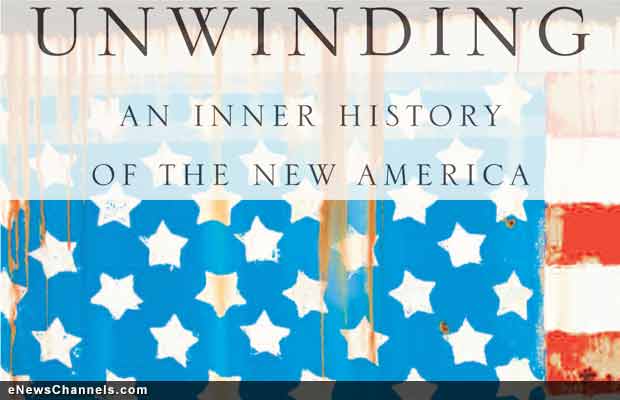 REVIEW: The deterioration of our country during the past three-and-a-half decades makes for a broad canvas but author George Packer provides insightful detail and hits some emotional high points.

There was an incredible battle in the United States from around 1978 until right now, a conflagration that did not emphasize armed conflict but which decimated large chunks of the basic goodness of our nation. It was a clash involving two groups of people: on one side were those with money and control and influence and authority; on the other side were the two hundred ninety-four million of us without those advantages. 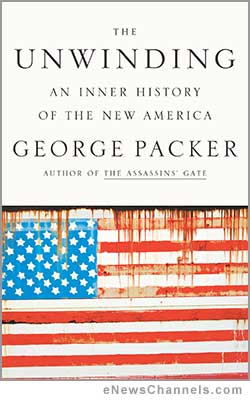 In terms of raw numbers, “the people” are supreme. We outnumber the power elites and yet they keep on slaughtering us. They have systematically ripped apart the walls, ceilings, floorboards, and foundation of all that we formerly relied upon for strength and community and security. They crushed us and they continue to do so because we let them.

“We did nothing illegal!” That is often the plea of miscreants like Mitt Romney as their immoral and unconscionable acts are brought to light. Shipping jobs overseas; hiding income from U.S. taxes; claiming $77,000 in tax deductions for a dancing horse… little things like that. But UnfitMitt is just one example of the greedwhore mentality that is rampant in our nation. Far worse are the corporations and large institutions themselves. Consider their actions:

Foreclosing on people’s homes without giving them a chance to restructure their loans; seizing workers’ pensions to ensure big payouts to management as a firm is put into bankruptcy or shut down; cutting workers’ hours to avoid providing benefits… little things like that.

All of this is touched on by Packer in ways that are intensely personal. He gets us up close to the people who are being made to suffer day in and day out by decisions that may be legal but which are disgusting.

Example: A man named Jeff Connaughton is working at E.F. Hutton just after it pleaded guilty to two thousand counts of wire and mail fraud. On a business trip to Florida, he notices:

The towns and counties had huge pension liabilities–why not arbitrage them? Issue a hundred-million-dollar pension bond tax-free at 4 percent, then invest the money for a few years at 6 or 7 percent? It was a kind of scam on the U.S. taxpayer. But a bond firm gave a favorable opinion (it was legal if you could get a law firm to tell you it was legal–lawyers were becoming more creative as the action got exponentially more profitable), and his boss, a former bond lawyer himself, was pleased. Connaughton was figuring out how to do investment banking in the 1980s. Playing the tax rules was a racket.

Heartbreak is the operative word in many sections of the book, even when the people being profiled are experiencing monetary success. For example, there is a brief chapter on Sam Walton, founder of the appalling Wal-Mart empire that is known for sex discrimination, unfair labor practices, importing tons of foreign-made crap, and underpaying its work force so badly that the American people are forced to pick up the slack in the form of food stamps and public health assistance.

A personal unwinding is spotlighted as we watch General Colin Powell take his reputation and toss it into the ashcan of history as he (A) buys into the lies of the Bush/Cheney administration and (B) steps out on the world stage and repeats the lies.

But it’s the corporate unwinding that clutches at the fibers of our country.  Take the ongoing problem of home mortgages:

That paragraph continues for another 13 lines and the story continues well after that, often involving people who are innocent of everything except trying to believe in the American dream. Most of the institutions and people they deal with are complicit in the deception and (barely) legalized theft.

One of the recurring stories in the book is of a man named Dean Price, a member of the republican moronocracy who was able to see some of the treachery and sham of that class. At one point in the book, he looks at a Bojangles’ fast food restaurant and has an epiphany:

He was seeing beyond the surfaces of the land to its hidden truths. Some nights he sat up late on his front porch with a glass of Jack and listened to the trucks heading south on 220, carrying crates of live chickens to the slaughterhouses–always under cover of darkness, like a vast and shameful trafficking–chickens pumped full of hormones that left them too big to walk–and he thought how these same chickens might return from their destination as pieces of meat to the floodlit Bojangles’ up the hill from his house, and that meat would be drowned in the bubbling fryers by employees whose hatred of the job would leak into the cooked food, and that food would be served up and eaten by customers who would grow obese and end up in the hospital in Greensboro with diabetes or heart failure, a burden to the public, and later Dean would see them riding around the Mayodan Wal-Mart in electric carts because they were too heavy to walk the aisles of a Supercenter, just like hormone-fed chickens.

Do immoral people get elected to Congress or does getting elected to Congress turn people immoral? Perhaps it’s both. Consider the sad and sorry case of former senator Chris Dodd. Recipient of tens of millions from Wall Street plus a sweetheart mortgage from Countrywide, he was one of the scumsuckers who approved monstrous bonus payments to executives of the odious AIG. But did he in any way attempt to atone for his perfidy? Nope. That’s not how the system works:

You had to think really hard before you took on the establishment, because there were a lot of ways to build a very comfortable life if you went with the flow (like become the top lobbyist for the movie industry, which is what Dodd would go on to do), but standing against the establishment closed off a big part of America that otherwise would have made room for you. You were in or you were out.

While the biggest puzzlement with the book is the lack of an index, there are also some sections that are bewildering, such as a chapter on Shawn Corey Carter (Jay-Z) which does little other than show that the man is focused on money and using people, two things already known to everyone in the English-speaking world.

There is also a chapter on the maggot-in-human-form known as Andrew Breitbart and part of the description of him includes the term “citizen journalist,” which spits on the meaning of both words. Fortunately, that worthless clown is now dead but unfortunately his type of filth and bile is still being vomited up by his fellow-travelers in the GOP and in the troll web sites that support their tear-down-America activities.

Also in the book are sections on a woman named Karen Jaroch in which her stupidity, gullibility, and anti-Americanism are amply displayed but with precious little insight as to why there are subhuman creatures like her in such great supply. Perhaps the most telling phrase in the pages on this idiot is this one: “When a fact threatened to undercut one line of argument, she would switch to another…” For anyone who has ever had to talk to a republican, that phrase will have terrible resonance.

Unless you live in the RWNJ power bubble, you’ve seen the results of the unwinding: farms failing, factories closing, jobs moving overseas, wealth becoming concentrated amongst a few families full of blighted, stunted, close-minded people. And in every sphere of corporate American, the watchwords have become greed, avarice, greed, cupidity, and more greed. This is the unwinding, and “If you were born around 1960 or afterward, you have spent your adult life in the vertigo of that unwinding.”

My son and daughter have known nothing else but the unwinding. They have been handed the most marvelous communication tools in the history of the planet and told to play with them without regard to how they were developed and how they are made; society seems to be telling them to have fun now because their future is being constricted and choked off.

If we continue along the same path as the past thirty-five years, their generation will face a world in which large numbers of people will have limited rights to obtain drinkable water, breathable air, edible food, affordable healthcare, or basic infrastructure. Is that republican legacy something we wish for our children?

Let’s hope not, and let’s hope the nation winds up voting out the scoundrels, crooks, liars, cheats, and obstructionists. “The Unwinding” is quite good, and if it convinces just a few more people to turn to the decent side of humanity, it will be viewed as a great work.

This original article is Copr. © 2013 by John Scott G and originally published on eNewsChannels – all commercial and reprint rights reserved. No fee or other consideration was paid to the author, this site, or its publisher by anyone for composing this unbiased article/review.

New Book by William G. Hyland Jr., 'George Mason: The Founding Father Who Gave Us the Bill of Rights' Apr 2, 2019