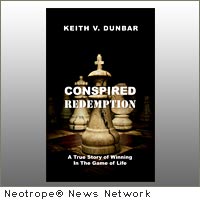 LITTLE ROCK, Ark. /eNewsChannels/ — “Conspired Redemption – A True Story of Winning in the Game of Life” (ISBN: 978-1453868249), authored by Keith V. Dunbar, is a story that reveals severe drug laws while offering up hope for the future. His engaging testimony encourages youth and adults to change their thinking in an effort to change their condition.

In this new book, Dunbar warns audiences about the serious drug conspiracy laws that are leading to mass incarcerations. And, he speaks from experience because he was charged with conspiracy to distribute and possession with intent to distribute cocaine base. During his 10-year stint in Federal prison, he reflected on the act and prepared for his release and future defense.

Conspired Redemption is Dunbar’s defense. The book, divided into four parts, takes the reader on one man’s personal journey – a journey that has ultimately led him to reach out to others to ensure that they do not make the same mistakes that he did.

It takes the reader through different mindsets and outlines the behaviors and conspiracies leading to his imprisonment. It discusses his time in prison where he learned how to play chess. He played in the prison yard and was soon beating everyone.

“Other prisoners could not believe that some country boy from Arkansas was taking everyone down,” says Dunbar. “This encouraged me to continue to play during and after prison.”

Dunbar played in tournaments and quickly grasped the many positive concepts that chess represented. He saw value in its ability to build analytical skills and to strengthen memory.

As a result, “Conspired Redemption” is freckled with chess analogies in an effort to communicate how closely life and chess are related.

The book makes an effort to reach out to at-risk kids, kids attending alternative schools, men in prison and parents.

“It all starts at home,” he says. “Your future is tied to your education.”

Conspired Redemption is 276 pages and sells for $15.95. It is available in paperback at www.ConspiredRedemption.com and Amazon.com.

Today, Keith V. Dunbar has been out of prison for more than three years. He lives with his wife in Arkansas and has turned his life around. He is an entrepreneur, investor and consultant to youth and community organizations. He’s a business major in college with a near perfect GPA and is the president of the Urban Knights Chess Club where he teaches at-risk kids how to play the game. He regularly speaks to African American males about drug conspiracy laws and how to avoid criminal behavior, and ultimately prison.

For more information and to view a book trailer, visit: .