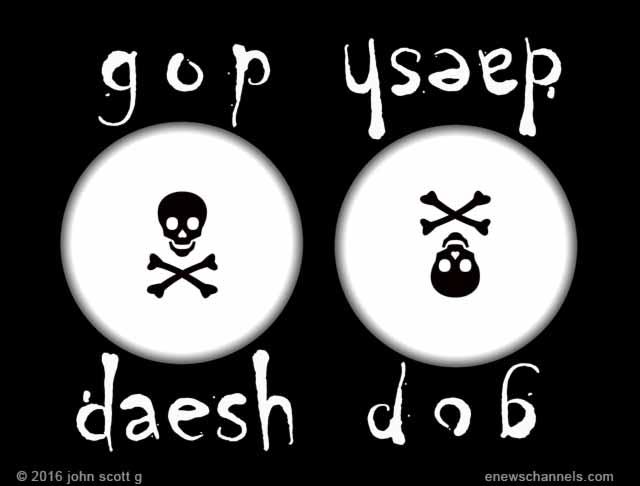 There are terms that strike fear into the hearts of decent people. Among these terms are ISIS, ISIL, Daesh, Islamic State, and GOP. Here’s how they are connected.

Daesh is an Arabic word that roughly translates as “evil people who are even worse than Republicans.” Wait, hold on a second. I’m being told that the definition of Daesh is actually closer to “bigots who seek to crush others.” Hmm, seems like a distinction without a difference. Potayto, potahto, and all that.

More importantly, Daesh is the term used by those in the Middle East who oppose the brigands and bastards calling themselves Islamic State of the Levant (ISIL) or Islamic State in Iraq and Syria (ISIS) or Islamic State of Iraq and al-Sham (also ISIS) or GOP (greedy obstructionist pricks) or IMHO (in my humble opinion) or ROTFLMAO (rolling on the floor laughing my ass off) or OU812 (oh, you ate one, too) or whatever the hell else they can come up with.

Goals of the Godforsaken

The primary long-term goal of Daesh is this: convince the world’s 1,500,000,000 followers of Islam that people of other religions are out to get them. The idea is to foment a worldwide conflagration in which Islam battles all the rest of us infidels. To the death. Or at least until the number of mosques equals the number of 7-11s.

But how could the radical Islamic terrorists stir up enough hatred and animosity in the globe to start World War III? At first, they tried barbarism in many forms: beheading innocent people; immolating innocent people; torturing innocent people; plus a whole bunch of raping, pillaging, enslaving, killing, slaughtering, dragging people behind their Toyota pickup trucks….

The savagery of Daesh has riled up a great many people, some of whom are losing what’s left of their minds in the process of overreacting. Nations are spending millions to send warplanes and drones to drop high-priced explosive devices on Daesh territory in the Middle East.

That sort of military action helps the terrorists because the Western nations’ aggression looks good in Daesh recruitment videos. (“See what we’re telling you? See how the Others are bombing us? See?!”)

One great idea they had was to see if perhaps they could get some of the more dim-witted members of the Christian cults to help Daesh achieve its goals. Sounds weird, right? But they might be succeeding thanks to Conservatives.

Stupid Is as Stupid Does

There are actions that members of developed countries could do that would give aid and comfort to the Daesh death cult terrorists.

* If, for example, everyday Republican morons in the United States could be recorded shouting epithets at Muslims — that would help the terrorists.

* If, for example, right-wing nutjob politicians could be recorded making anti-Muslim comments in their speeches and blather — that would help the terrorists.

* If, for example, the leading rethuglican presidential candidate could be recorded proposing an inflammatory, and unconstitutional, ban on Muslims entering the United States — that would help the terrorists.

Wait a minute… why, that’s exactly what is happening. Daesh gives thanks to Republicans in America. Daesh heart GOP. Allah be praised.

This opinion piece is Copr. © 2016 by John Scott G and originally published on eNewsChannels.com – a publication of Neotrope® – all commercial and reprint rights reserved. Some elements use satire to make a point, and not all references to anonymous people or fictional characters should be assumed to be based on fact. Illustrations by and © JSG. Opinions expressed are solely those of the author.

INFOGRAPHIC: What to do with Mom’s Home after she passes - from Silver Solutions May 15, 2020