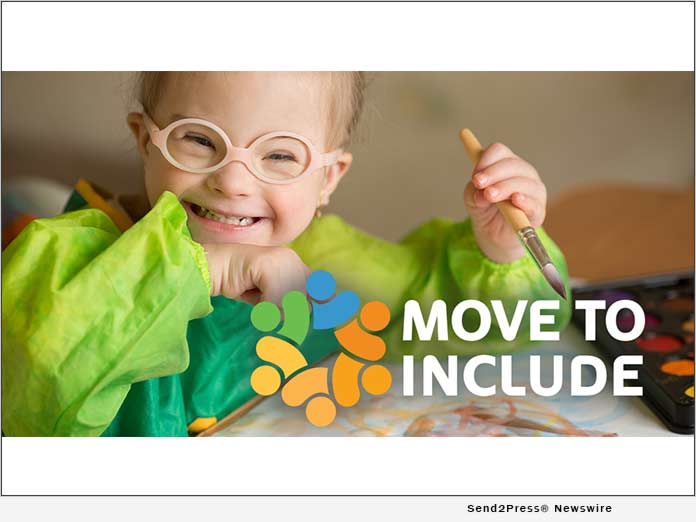 (ROCHESTER, N.Y.) — NEWS: July 2020 marks the 30th anniversary of President Bush signing into law the Americans with Disabilities Act. In celebration of this civil rights law, WXXI Public Media (Rochester, New York) is leading a pilot project to expand its innovative “Move to Include” initiative into five additional communities. Funded through a grant from the Corporation of Public Broadcasting, this national initiative will use the power of public media to inform and transform attitudes and behavior about disabilities.

“We’re proud to pilot Move to Include in five additional communities, using public media’s many platforms to promote equity and inclusion,” said WXXI President Norm Silverstein. “Through Move to Include, we hope to build more inclusive communities by inspiring and motivating people to embrace different abilities and include all people in every aspect of community life.”

The six PBS stations will work to organize community partnerships, create content, and provide outreach specific to their own communities. They will also contribute content to the PBS LearningMedia collection used by teachers, families and students free of charge.

To learn more about this initiative, the work of all six stations, and more, visit: https://movetoinclude.us/.

Below are a few highlights of what stations will be doing in their communities:

WXXI (Rochester, New York)
* The WXXI News Inclusion Desk: WXXI’s News team will produce a variety of stories, from the arts to transportation issues to how the COVID-19 pandemic has affected those with disabilities. The stories will broadcast on AM1370 and FM 88.5 and online at WXXINews.org throughout July.
* WXXI LIVE Forum: The Impact of COVID-19 on People with Disabilities / Premieres July 23 at 8 p.m. on WXXI-TV

WXXI hosts a virtual town hall style forum that looks at how COVID-19 has affected those with disabilities.

WFYI (Indianapolis)
* Veterans Coming Home: Healing Arts / Airs July 23 at 7:30 on WFYI-TV
This 30-minute WFYI documentary tells the inspiring stories of local veterans who are using art to help transform their war experiences into hope and healing.
* No Limits / Airs July 30 at 9 p.m. on WFYI-TV
o This half-hour documentary from 12 Star Media follows high school students from the Indiana School for the Blind and Vision Impaired as they work with an Indianapolis arts organizations to design more accessible experiences. The piece will air with audio descriptions.
OPB (Oregon)
* Fairview Resident Profile: The Fairview Training Center admitted nearly 10,000 Oregonians over the course of its 100-year existence, most of whom were people with intellectual or developmental disabilities. One longtime resident describes what it was like to live there as an “inmate” who wore a uniform, slept in barracks-style quarters and worked every day on the site’s 700-acre farm. Air date TBA.|
* People First: Several residents of the Fairview Training Center helped launch the global People First movement in the 1970’s. At its first meeting in Oregon in 1974, people with intellectual and developmental disabilities gathered to speak up for themselves to advocate for improvements in their own lives and for more opportunities for independent living and growth. Air date TBA.

WGCU (Southwest Florida)
* Digital Storytelling digital segments: WGCU teamed up with Best Buddies of Southwest Florida for a digital storytelling workshop that launched the initiative. The workshop provided an opportunity for buddy teams to become filmmakers and story tellers.
* Gulf Coast Life: WGCU’s locally produced radio talk show, will feature local organizations that provide services/programs to the disable community, and will talk with people living with disabilities to discuss issues around accessibility.

WCNY (Syracuse)
* Connect NY: The ADA Today / Premieres July 27 at 9 p.m. on WCNY-TV
Three decades after the American with Disabilities Act was passed, nearly 70% of individuals with disabilities still cannot land a job. WCNY speaks with one Syracuse agency who is trying to break the stigmas attached to the word disabled, and introduces viewers to a grassroots advocate who shares what is lacking with the ADA in 2020.
* Capitol Pressroom, WCNY’s live weekday radio broadcast from the Legislative Correspondents Association Pressroom at State Capitol in Albany, will present four themed Move to Include segments in July.

Iowa PBS
* The Life Autistic / Airs July 13 at 8 p.m. CT on Iowa PBS
This Iowa PBS produced documentary explores the challenges and successes of individuals with Autism Spectrum Disorder (ASD), at different stages in life and range on the spectrum. Host Tyler Leech, a member of Iowa’s community of people with autism, guides us through all twelve stories from the original Iowa PBS web series.
* Accessibility Now / Airs July 20 at 8 p.m. CT on Iowa PBS
Told firsthand by Iowans with disabilities, this half-hour documentary examines how the Americans with Disabilities Act has helped improve their lives and how they continue to face barriers to equality.
Nationally, the WORLD Channel will broadcast a collection of films from its America ReFramed series. WORLD is making this collection free-of-charge to public media stations across the country (check local listings). Selected films for Move to Include are:
* Vision Portraits: Acclaimed director Rodney Evans takes viewers on a personal journey as he ponders how the deterioration of his vision will impact his life. Airs: July 4 at 10 p.m. ET
* Enter the Faun: A choreographer and an actor with cerebral palsy collaborate to prove that everybody can transform. Airs: Tuesday, July 7 at 8 p.m. ET
* Deej: The story of DJ Savarese (“Deej”), a gifted, young writer and advocate for nonspeaking autistics. Airs: Tuesday, July 14 at 8 p.m. ET
* Intelligent Lives: Pioneering teens with intellectual disabilities work for increased inclusion and independence. Airs: Tuesday, July 21 at 8 p.m. ET
* Perfectly Normal for Me: An after-school dance program for kids with physical disabilities prepares for a spring recital. Airs: Tuesday, July 28 at 8 p.m. ET

WORLD will also showcase content created by the six stations in a special two-hour block of Move to Include documentaries and programs on Sunday, July 26 from 12 p.m. to 2 p.m.

Move to Include was launched in Rochester, New York in 2014 as a local partnership between WXXI and the Golisano Foundation, the nation’s largest private foundation devoted to supporting programs for people with intellectual disabilities. The Foundation, which also donated $20 million to build Southwest Florida’s Golisano Children’s Hospital, has provided more than $1 million in funding to date for Move to Include in Rochester. The Corporation for Public Broadcasting (CPB) awarded the initiative a $645,000 grant to help expand the multimedia initiative to these five public media organizations over 16 months.

“Public media’s mission is to make high quality programming free and accessible to all, and Move to Include is an important part of ensuring inclusion for people with disabilities,” said Pat Harrison, president and CEO of the Corporation for Public Broadcasting. “CPB is proud to support this effort by local public media stations to strengthen our civil society by building more inclusive communities.”

The Corporation for Public Broadcasting (CPB), a private, nonprofit corporation created by Congress in 1967, is the steward of the federal government’s investment in public broadcasting. It helps support the operations of more than 1,500 locally owned and operated public television and radio stations nationwide. CPB is also the largest single source of funding for research, technology, and program development for public radio, television, and related online services.

WXXI Public Media is the essential, life-long educational media resource for the Greater Rochester area in New York State. WXXI puts the community first with programming that stimulates and expands thought, inspires the spirit, opens cultural horizons and promotes understanding of diverse community issues. WXXI also has a long-term affiliation with Little Theatre, which helps enhance the cultural life of the community and strengthens two of Rochester’s most vital arts institutions. Log on to https://www.wxxi.org/ for more information about our services and programs.

John Anton, Individual with Down Syndrome, Testifies for Phasing Out Subminimum Wages for Individuals with Disabilities Jul 23, 2021

Move For Hunger and KASTLE Join Together in the Fight Against Hunger for the Third Year Jun 6, 2022