REVIEW: The litany of deceit, stupidity, outrage, and perfidy from the lone-brain-cell state is remarkably terrifying, yet Gail Collins is such a good writer that she makes you laugh about it on nearly every page. Her book is witty and insightful while regaling you with true tales that are funny in both senses of the work (ha-ha and strange). 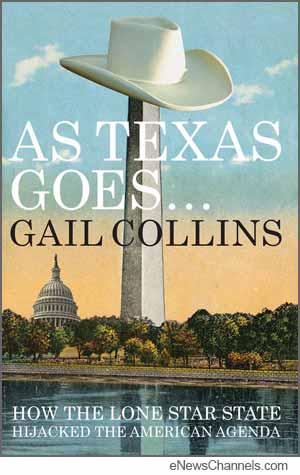 It’s been a while since a collection of horror stories made me grin this much but Gail Collins is such a skillful writer that she could probably wring humor from the Inquisition or the Romney/Ryan budget.

Collins, a columnist for the New York Times and author of When Everything Changed, says she was initially opposed to writing this book. And now that one thinks about it, who would want to do anything that involves setting foot in the South, but she admits to getting intrigued when a news headline was sent to her from Texas. It read: “Man Allegedly Beat Woman with Frozen Armadillo.”

Okay, so that wouldn’t be enough to convince me to go but I take her point: Southern Gothic Strange may sometimes look charming compared to Big Eastern City Urban Strange.

Getting into her subject, she points out that “we have to understand a little about what Texas means to Texans.” Fair enough. “The memory that it was once an independent country, and the conviction that it could be again, any time it wants to, weighs heavily in the state mentality,” she writes. She also quotes Rick Perry, the state’s mentally-challenged governor, on that same subject and then deftly dispels the dream:

The idea that Texans actually want to secede from the union is, no matter what Perry has said, another myth. A Rasmussen poll in 2009 found that only 18 percent of the respondents said they favored breaking away. That’s still a tidy number — when you’re talking 18 percent in Texas you’re talking way over 4 million people. But there is virtually nothing, no matter how crazy, that you can’t get about 18 percent of Americans to support if they’re in a bad enough mood. In the spring of 2011, 17 percent of likely Republican primary voters said they thought it would be a good idea to nominate Donald Trump for president.

There you have Collins’ style in a nutshell: she puts her points across in lovely cadenced sentences strewn with just enough facts to build a foundation for her observations, and then POW you get a nice, delicious slice of satire served up like it was apple pie-a-la-mode. That she can keep doing this, chapter after chapter, sometimes page after page, is awe-inspiring. Makes me wonder if her columns are this good.

She has the ability to set up a topic and then skewer the bad boy in the story with one well-turned phrase, as when she talks about the former governor of the state, George W. Bush, and how he “pushed through a big tax cut that blew the state surplus and left Texas sitting with a monster deficit” and then adds just three words later that he “went to Washington to do exactly the same thing to the country.” That’s as neat a summary of “W” and the Republicans as any you’ll read in a long time.

Or consider her nifty view of the conclusion to the nation’s savings and loan crisis:

And then there was the price of Texas bidness itself. By the time the thrifts stopped imploding in the 1990s, 237 Texas S & Ls had failed, more than twice as many as in next-place California. In the end, more than half of all the money lost in the nationwide debacle was lost in Texas. As Robert Bryce notes in his Texas book, Cronies, Texas got $4,775 per capita in federal bailout funds, while New Jersey lost $1,074 per capita. It was one of those times when Texas politicians did not complain about massive government spending.

By that subtitle we could mean the space between the ears of the majority of people living in Texas (except, of course, for the very sharp crooks who bilk the USA out of funds), but it actually refers to a theory Collins puts forth about the difference between people who live in urban (crowded) places and people who live in rural (empty) places. Living in a city means “you want a buffer between your family and the rest of the world.” Rules, regulations, and enforcement are welcomed as a way to cope with everything from noisy neighbors to factories that pollute the air and water.

But rural folk don’t see the need for that kind of guv-mint help. True, this will change as the Dick Cheney-approved fracking pollutes the ground water in more and more rural locations, but for now the problems of cities are not of concern in the sticks. Factories, hell, they got those over in some other county. Noisy neighbors, hell, we ain’t got no neighbors. Burglars? Hell, we got guns.

The list of mountebanks, charlatans, and criminals in the history of Texas is long and colorful, the colors being mainly white, puffy white, and flushed-reddish white.

Phil Gramm’s support of Enron is discussed. This support came about because that crooked company was a large donor to the campaign of, you guessed it, Phil Gramm. Enron, as Collins writes, was “a business of the twenty-first century — that is, a place that creates nothing whatsoever, but devotes all its time to taking stuff that other people make and putting it in various financial packages, which are then traded back and forth until their value lose all relationship to reality.”

The economic shock visited on taxpayers by Enron did not hurt Gramm, of course, or his wife, who was in the George H.W. Bush administration and thus able to remove certain governmental oversight of Enron. She then was appointed to the board of Enron where she served on their interesting idea of an audit committee and for which she received a million dollars or so for basically looking the other way.

But there are tons of other disgusting examples in the book. Like in education: “No Child Left Behind immediately made an impact on the nation. One of the first big changes was that nearly a third of the states lowered their standards for academic success.”

Or the fact that for-profit cyber-schools started in Texas. As Collins points out, “A study by the National Education Policy Center at the University of Colorado found that only about a quarter of for-profit virtual schools met federal standards for academic progress. But, you know, it’s all about choice.”

Or the degradation of school textbooks nationwide by the necessity of dumbing them down to pass Texas school board requirements, which means they must omit lots of stuff like, gosh what’s the word, oh I know: facts. Even when some actual data is left in the textbooks, Texas, according to Collins, has been “successful in helping to make evolution – and history, and everything else – seem really, really boring.”

There are humorous and/or painful stories about pols from various parts of the country, including such despicable creatures as Tom DeLay, William Bennett, Mike Milken, John Boehner, Karl Rove, Pat Buchanan, Herman Cain, Newt Gingrich, Dick Cheney, Ken Lay, and all three of the Bush clan (Poppa, Puppet, and Padded) but it’s amazing how often the difficulties can be traced back to The Mess of Texas.

As I’m sure you’ve noticed, the approach to information about sex is perverted and stupid in every neo-con decision, but no more so than in Texas. In their four approved health textbooks, the word “condom” is mentioned exactly . . . wait for it . . . once. One of the books “listed ‘8 Steps to Protect Yourself from STDs,’ none of which involved using condoms. One of the steps was ‘get plenty of rest,’ which the book suggested would lead to better decision-making.”

Not paying attention to what cretins do in Texas would lead to even better decision-making.

Unconcerned. That describes how Texas, and the GOP in general, feel about your future, or your children’s future, or their own future come to think of it. For example, “The 2000 Republican platform promised that the party nominee would approach environmental issues ‘just as he did it in Texas.’ That sounded rather ominous, since at the time Texas ranked first in airborne carcinogens, first in ozone components, first in toxic air releases.”

Under George W. Bush, “the idea of doing anything serious about global warming got trashed, pounded into the ground, pulverized, vaporized, and expelled into the already rather heavily polluted Washington air.”

Voter suppression laws are a big deal in Texas, thus ensuring unfair vote turn-outs for the GOP. Deregulation to unleash the free market is a big deal for Texas politicos, with nary a qualm about the horror this passes on to the general population. But morality is not an issue among the GOP in Texas. Or anywhere else, as decent folks have begun to notice, but it just seems like a bigger concern in such a big state. Financial problems? Energy problems? Environmental problems? Education problems? Not a worry for these folks. Along with the rest of the GOP, Texas politicians are happy as long as they can say “I got mine.”

As for taxes, “Texas is a low-tax state only for people with lots of income. A study by the Institute on Taxation and Economic Policy found that the bottom 20 percent of residents pay more than 12 percent of their income in state and local taxes, while the top 20 percent pay about 3.3 percent.” And this is what many in the GOP want to export to the rest of the nation? Yup. Plus:

Only one state in the union doesn’t require large employers to take part in a state-regulated workers’ compensation system, which provides people with medical benefits and support if they’re injured on the job. We will take a moment’s rest here while everybody guesses which state that is.

The primary problem with the Texas approach is not their piss-poor educational system, their backwards view of taxation, their vote suppression, their worthless healthcare, and so on. Sure, all those things are screwed up. And they keep sending so many vile turds to Congress to spread their perfidy to the rest of us. But the main problem with Texas is that you and I pay so much for the privilege of their existence.

Texas was built by government assistance of one kind or another. A massive federally funded infrastructure, including the great New Deal rural electrification and the Eisenhower-era roads, brought the state out of the semifeudal condition it had existed in from the time of Sam Houston. For most of American history, Texas was a place that sent raw material off for some more advanced place to turn into valuable products. The federal government lifted it out of that trap, all the while subsidizing the crops it produced, and doling out massive tax credits to the oil it pumped from the ground.

In addition, a quarter of their huge population is without health insurance, leaving many to take their health problems to other states, transferring the burden of care (or the even greater problem of exposure to diseases) from Texas to the rest of us.

I could go on and on since Gail Collin’s As Texas Goes. . . is jam-packed with facts and funny comments about those facts. So let me just say that I heartily recommend this book. You’ll laugh, you’ll cry, you’ll do both at once. But mainly cry because the way things are turning out, “as Texas fails, so fails the nation.”

Article is Copr. © 2012 by John Scott G and originally published on eNewsChannels.com – all commercial and reprint rights reserved. No fee or other consideration was provided by the book publisher, author or agency in relation to this original article.

New Book: 'Stinking Thinking Isn't Cool!' by author Mekani G. Collins is an adventure story for all youngsters to enjoy