eNewsChannels COLUMN: Given the amazing results of many Tribes of the Americas along with groups of diverse cultures performing New Year’s ceremonies to heal the oceans, it appears that our Earth Family has begun to fulfill the prophesy of what the tribes call “The Purification.”

This unprecedented solidarity, inspired by the magnificent Azteca ceremonial dances in Puerto Vallarta (PV), Mexico, means Mother Earth won’t have to rebalance Herself so drastically, which spells a smoother ride for us around 2012! Tsunamis of gratitude to all those who sent prayers enhancing this ongoing global shift. 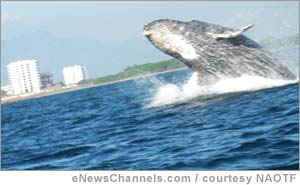 Here is some of the spiritual firepower that led to New Year’s breakthrough, in alignment with PV’s launch orchestrated at the request of the UN, by our Native American Olympic Team Foundation (NAOTF.org) with my gifted Elder advisor, Dr. Olivia Ellis. Plus what we can each do to further restore Eden.

Southern Ute Elder, Eddie Box Jr, who led the mountain snowdance launch at Vail’s World Cup in December with his Dine/Navajo wife Betty said, “Our tribe held a ceremony at Midnight as part of our New Years’ Pow Wow, which most American Indian Nations did.” “Most of our North American Elders have been in ceremony since November to rebalance Nature’s cycles, including New Year’s,” said a liaison. He coincidentally shared what I said at Puerto Vallarta’s Dawn ceremony, “that Mainstreamers need to express appreciation to Mother Earth, as well as make green steps every day, not just once a year on Earth Day.”

“The pollution of the seas has become so extreme it’s creating extreme imbalances in the whole environment,” says Owen Waters, a gifted world healer. Tribal Elders say, “These toxins are altering Nature’s cycles.”

Scientists have proven that the ocean’s phytoplankton, its staff of life, is also the most vital source of oxygen for humans, more than rain forests, and it is being poisoned by toxins from our household products, carcinogenic plastic trash, tailpipe exhaust, coal, oil spills and oil dispersant. Mainstreamers with the power MUST learn from these catastrophes and switch to all-natural products while insisting our representatives shift budgets to clean renewable energy. Annie Leonard’s “Story of Bottled Water” video and EWG.org have major plastic/water/ocean cures: http://green.yahoo.com/blog/greenpicks/273/new-video-the-story-of-bottled-water.html .

While most of us do this critical spiritual work on faith, Owen, Olivia and Elders have gifts to see its effects on other dimensions, like auras and Nature spirits/devas, to give us vital feedback. “The Psychic Detectives” and “Medium” TV shows demonstrate these scientifically-proven dimensions often used by polise.

What reinforced my eating mainly organics, which protects our bodies and water from DNA-altering pesticides, was attending Telluride’s (CO) Awareness Festival where renowned Naturopath, Dr Gabriel Cousins showed us Kirlian photography slides of fruits and veggies. The auras of organic foods had shafts of light called ‘life force energy’ emanating from them, while pesticided many foods’ were black blobs. Therefore, when Owen reported that he could see that “great pioneering inroads towards restoring ecological balance took place on New Years, thanks to so many taking this sacred task upon them-selves,” I felt reinforced that this U.N. solution of cross-cultural ceremonies is making an enormous difference.”

Owen explained that, “People are not generally aware that given our loving energy, water actually purifies itself from toxicity. Sending love and appreciation into the seas raises the energetic vibration of the water. Because all toxins function at low frequencies, a frequency rise removes the energetic framework that holds the pollutants in physical existence.”

Therefore it made sense on New Years when Dreama Vance, a gifted seer, reported, “Today, I had a distinct impression of the ocean’s water becoming clean, clear and replenished.”

We noticed after our ceremony next to Los Muertos Pier in PV’s Bandaras Bay that the water near us was a crystal clear green, enhanced by Lynn Wedekind’s OHM Gong. That got me wondering about Baja’s Gray Whales with the ‘skinny syndrome’ and nearly unable to reproduce, yet PV’s Humpbacks were happily chubby. Out of my mouth came, “I bet the Humpbacks still come here thanks to magnificent dance ceremonies by the Aztecas, Huichols, Mayans, along with the Totnaca’s amazing daily Earth-celebrating Maypole ceremony, and Aztec Elder Mazatl performing a sacred fire ceremony nightly on the tourist Pirate Ship.

Owen confirmed, “Mazatl and the others are lifting Bandaras Bay’s energy so there’s enough plankton for the Humpbacks’ mating dances and birthing, why they call it a ‘happening place.'” Scuba instructor, Joaquin Joya, confirmed that “Bandaras Bay’s warmer Pacific waters are clearer than Baja’s. The difference is there’s more Indigenous people and ceremonies around the Bay.”

Hail to Ambassador Loayza and Indigenous Bolivians who initiated U.N’s International Mother Earth Day. And to Maria Mercedes Sanchez, UN’s Sustainability officer, who suggested our foundation create model ceremonies like Puerto Vallarta’s ocean and Vail’s mountain launches, to show global communities how they can invite their Indigenous Elders to lead ceremonies to rebalance Mother Earth leading up to Her day, April 22, 2011. Mountain – Ocean – http://www.banderasnews.com/1012/nb-oceanhealing.htm Or call on our Native American Elders.

Ms Sanchez also asked NAOTF to assist inviting Native Elders to speak at UN’s 2012 RIO-20 Conference, following U. N. Assembly President Miguel Brockmann saying, “Time to listen to the voices of Indigenous people.” I said communities need to host Elders-led ceremonies leading up to Her Day to ensure our civilization is fully intact in 2012. They saw the light and it’s working!

The late 2007 Shared Nobel Prize winner, Dr. Stephen Schneider, who partnered with Native American Elders, praised U.S. Ski Areas for inviting Native kids to ski, which inspired Elders to lead snowdances that have saved ski areas from snow droughts since 1963. (http://snow-riders.org/mir.html) The Elders raise the vibration of mountains through prayers of appreciation to Mother Earth, Nature and ancestral spirits, which purifies them and restores natural precipitation/snow cycles.

Three Nobel Laureates are raising awareness about the importance of rebalancing Nature’s cycles. Eric Chivian, Muhammad Yunus, and Joseph Stiglitz, agree that, “Humans are an inseparable part of Mother Earth, and Life depends on uninterrupted functioning of Her cycles.”

“There’s a great need today for dynamic forms of prayer, like the “World Healing Technique,” to help restore balance to the oceans and ecosphere,” said Dr. Ellis. “While the AMA, TM and Oneness Networks proved prayer works, my teacher, the knighted British astrophysicist Dr. George King, developed a way to amplify prayers, incorporated in Owen’s easy technique: www.worldhealingnow.org/heal.htm.” Dawn-noon-sunsets-midnight are potent times to give thanks.

“On New Year’s morning on Hawaii’s Big Island I saw a spectacular abundance of Humpbacks jumping. I now realize they were celebrating all the positive energy sent to heal our oceans,” shared whale protector Phil Kline.

A major focus was the Gulf of Mexico. Owen revealed what could happen by regularly starting our prayers with gratitude: “First, I sent gratitude to Creator, and then the Sun for giving me the energy to live on this planet. Then I asked for healing energy from the Sun and sent it into the Gulf.” (Why we need sun every day.)

THE DEVA OF THE GULF
“To my surprise, the Deva of the Gulf – the nature spirit of that whole body of water – appeared very clearly within my mind’s eye. She was a robed, goddess-type figure above the water less than a mile away and was about 1,600 feet high,” said Owen.

Olivia explained: “The loving energy that so many of these healers sent this great compassionate being is all she has to work with to help her heal the Gulf.” So spread the word to send this wondrous Gulf Deva prayers now that the existence of Devas/nature spirits is being revealed.

Mayan Elders say these ceremonies that connect Ancient Indigenous and Technological Mainstreamers with Mother Earth’s heart are critical to raising the vibration and smoothing the 2012 ride. We also need to use green versions of everything, especially green cleaners, organics, electric cars, and insist our reps vote for the Safe Chemical Act and clean renewable energy bills… 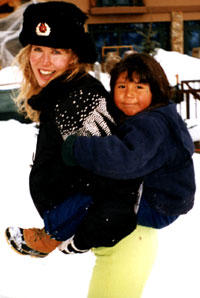 Suzy “Chapstick” Chaffee got world headlines as a downhiller at the ’68 Grenoble Olympics, and went on to incorporate her fantasies as a child ballerina of dancing down mountains to help invent ski ballet, become World Freestyle Champion, and star in the first fun fitness commercials in America, “Suzy Chapstick.” As an activist, she led the Title 1X March in Washington, and then starred in Bogner’s world hit “Fire & Ice.” And in 1995, after teaching a Lakota to ski with a free ticket from Telluride SkiCo, he inspired a snow miracle that saved Telluride, which motivated Chaffee to co-found Native Voices Foundation. The Native ski program snowballed across North America, educating and inspiring ski areas to invite thousands of tribal youth back to ski and snowboard, and tribal Elders to save ski areas with their snowdances. Out of this win-win evolved the Native American Olympic Team Foundation (NAOTF) and the UN asking the foundation to help inspire communities around the world to invite their Indigenous Elders to lead ocean and snowdances to help restore Mother Earth. Contact: Suzy Chaffee, suzynativevoices@aol.com, www.snow-riders.org, 323 4933877.