COLUMN: Indians honored as Pioneers of Skiing this Vancouver Olympic “Tribal” Year. I am so proud that the top Ski and Snowboard Shows in America are leading an outreach to Native kids this Vancouver “Tribal” Olympic Year. Ski Legends, like Billy Kidd, Donna Weinbrecht, and Wayne Wong are getting the word out at the shows that underserved American Indian kids are warmly welcomed to participate in the Free and Discounted “Learn a Snow Sport” Programs in most snow states, along with mainstream youth.

This will do wonders to expand healthy winter sports opportunities so Indian youth can have Olympic Dreams. This outreach is also in appreciation for Native American Tribes helping invent skiing 8-10,000 years ago. 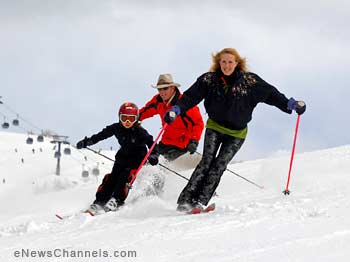 HAIL TO THE REAL PIONEERS OF SKIING!

The Apache and Dine/Navajo of US and Canada, who came over the Bering Straight are related to the Chinese-Mongolian pioneers of skiing in the Four Corners of Asia, say Norwegian historians now. Skiing helped them hunt down big game in the mountains to survive, according to Nils Larsen’s documentary, “Skiing in the Shadow of Genghis Khan,” which was honored at the 2009 World Ski Congress in Mammoth. These founding cousins have the same linguistics and ceremonies and can understand each other.

Wong, the Chinese-American forefather of freestyle skiing said, “Wow,” when I told him his people were also pioneers of skiing. That also explains why the Apaches found themselves starting two ski areas in our Four Corners 30 years ago. It’s in their DNA.

At the shows, Olympians, like Billy Kidd (Abenaki) at Denver’s, gold medal mogul skier Donna Weinbrecht at Boston and World Freestyle Champions Wayne Wong at Sacramento and Gene Tagaban (Tlinket-Cherokee), member of the Native American Snowboard Team, at Seattle, will share how all youth, including Native Americans, can still afford to ski and board this season. The Olympians will also lead an honoring of the tribes and Wong, in appreciation of their brilliant ancestors.

In 2002, David Ingemie, President of the SnowSports Industries of America (SIA), heroically donated $.6 million worth of snow sports gear to 45 tribes, “to help create a healthy generation of Native American Olympians.” With the support of Telluride’s General Schwarzkopf, many ski areas have been sharing the joy of skiing and boarding since 1996, with around 10,000 tribal youth in their ancestral lands. Providing winter sports ops is doing wonders to turn around Native youth having twice the obesity, diabetes, school dropout and suicide rates of any race. But the recession has reduced those ski and boarding ops, despite tribal Elders saving ski areas from droughts since Vail asked the Utes to do the first snowdance in 1963.

Because only one Native has competed in the Olympics in this Millennium, and only one Native girl ever, Billy Kidd (Vt Abenaki), a board member of the Native American Olympic Team Foundation (NAOTF), has put three talented Natives under his wing at Steamboat’s WinterSports Club. Six yr old Delaney Tyon, a Lakota-Sioux from Pine Ridge, the poorest rez in America, then won the 2008 National Nastar Ski Championships.

This Indian Olympic Outreach grew wings to fly two weeks ago when Mullin and BEWI’s Show director Bernie Weichsel showed up at my Vt Ski Hall of Fame Induction. Mullin excitedly got me in touch with the “Passport” directors in 10 states, after hooking her up with John Neptune, a “wonderful” Penobscot leader. He then brought in the rest of her states’ tribes to also dance and ski/board at a magnificent cross-cultural exchange Mullin is hosting at Sugarloaf this spring. Cultural and eco tourism are big state draws.

Michigan’s Micky MacWilliams, who heads their Passport program, clarified that anyone can easily find an application for their Free Ski 4th Grade Passport Programs on GoSkiMichigan.com, and all the other states, which sometimes include 5,6,7th graders, on SIA’s WinterFeelsGood.com.

All Passport programs, through Washington is the only one on the West Coast, give two kids in the designated grades free skiing or boarding tickets, along with discounted rental coupons, if one responsible adult buys a ticket.”

Because it is rare that many Native adults have been able to afford to learn to ski or snowboard, I encourage Indian kids to search for a responsible relative, teacher, or adult friend (of any culture), who needs to have fun too, to take them, or vice verse. Lift tickets are often discounted early and late season. Tribal teachers say, “Our kids live to snowboard and ski.” A smiling 4yr old took my hand at pow wow and asked, “When can we go skiing again, Suzy?”

Oregon, Washington and parts of Idaho also offer a “3 X Learn to Ski Package for $99. on SkiWashtington.com and SkiOregon.org. Plus check out your local areas and state ski associations for other Special Discounts. www.californiasnow.com includes websites of all their resorts so it is one stop deal shopping, including some affordable youth programs,” said Director Bob Roberts.

FREE X-C SKIING AND SNOW SHOEING – JANUARY 10
On January 10, the annual Winter Trails event, at more than 80 locations offers (Native American invented) snowshoeing and/or XC skiing. Offerings vary so check out the venue nearest you for details or WinterTrails.com.

The press from Indian Olympic Outreach could help raise awareness of millions more kids and kids at heart, that they can afford exciting winter sports.

These compassionate programs are a brilliant economic stimulus for the ski industry, while growing generations of happy skiers and boarders, its life blood. Plus it is good karma, especially welcoming tribal youth back to their beloved lands to ski and board often inspires snowblessings.

Compassion is in Fashion in the U.S. Ski Industry!

More info or donations to be able to continue this vital ski bridge between the cultures on WWW.SNOW-RIDERS.ORG.

(Olympic downhiller and 3X World Freestyle Champion, Suzy Chaffee, is co-chair of the Native American Olympic Team Foundation, a 501(c)3 cross-cultural partnership. She was inducted into the Hall of Fame by John Fry, former Editor -in-Chief of Ski Magazine, for pioneering: Title 1X, Freestyle, Olympic reform, short skis, Native Ski programs and snowdances, including at ski shows that resulted in up to 12 ft of early snow.)

Stanford’s 2007 Nobel Laureate Climatologist, Dr Stephen Schneider, said, “I think it is wonderful that ski areas have been inviting the tribes back to ski and snowboard, which has inspired their Elders to share their earth-honoring prayers and snowdances for U.S. Ski Areas for the last 13 years. It would be wise to further explore and expand such cross-fertilization,”

“Because large scale systems affect our complex weather, it is difficult to say which elements affect the precipitation outcome most, so one needs to work with all sides of the street. It would be foolish to dismiss anything that helps in this environmental crisis, especially if it costs almost nothing. So if it works, go for it,” said the Nobel skier.
Michael Berry, President of the National Ski Areas Association joined Dr Schneider in 2008, to publicly thanking the North American Elders for the “record snow.”

I honor my fellow Olympians at our reunion for voting our foundation a grant to help ensure that future generations can enjoy snow sports by inspiring ski areas to invite their tribes home, and remind us how to live again in more harmony with Nature, including switching back to all Natural “Snow Friendly” products.

New Horror Film, ’13 FANBOY’ Coming to a Theater Near You – New ‘FRIDAY THE 13TH’ spin-off