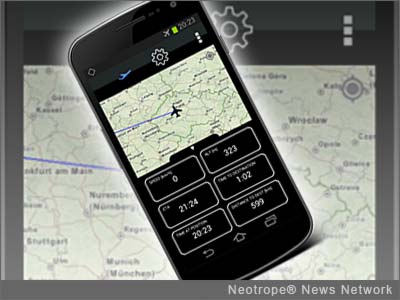 “The difference is that you are holding the tracker in your own hand, on your own device, and you can use it on any flight, whether the airline is offering its own flight tracker or not,” said Makro Productions President Marko Haulis.

He added, “This is great for those who love flight trackers but find themselves on flights that do not offer the feature. Even on a flight where an airline is offering a flight tracker, Flight Map is still quite useful, offering you the flexibility and convenience of a personal flight tracker. Say you are watching a movie and you want to check your flight status. With Flight Map you won’t have to interrupt your video. You can just refer to your Android device.”

Because the application relies on a database of airports and flight paths downloaded onto one’s device, and the tracking is done via GPS satellites, Flight Map does not require an Internet or data connection to function. That means it can operate in the “Airplane Mode” common to modern smartphones, and not violate rules against mobile phone use during a flight.

Flight Map’s features include:
* Realtime position of the plane on the map;
* Zoomable world map not dependent on a connection to the Internet;
* Works when your phone is in Airplane Mode, so it can be used anytime while in flight;
* Database of world airports;
* Estimated Time to Destination and Time to Arrival, depending on the plane type and position;
* Multi-language (currently English, Spanish, Portuguese, French, Russian, Chinese, Vietnamese, Czech).

“Flight Map” can be purchased and downloaded from the Amazon Appstore for Android at http://amzn.com/B00HM57FRC or the Google Play store at: https://play.google.com/store/apps/details?id=marko.android.flightmap .

More information and screenshots from the application are available at http://haulis.com/ .