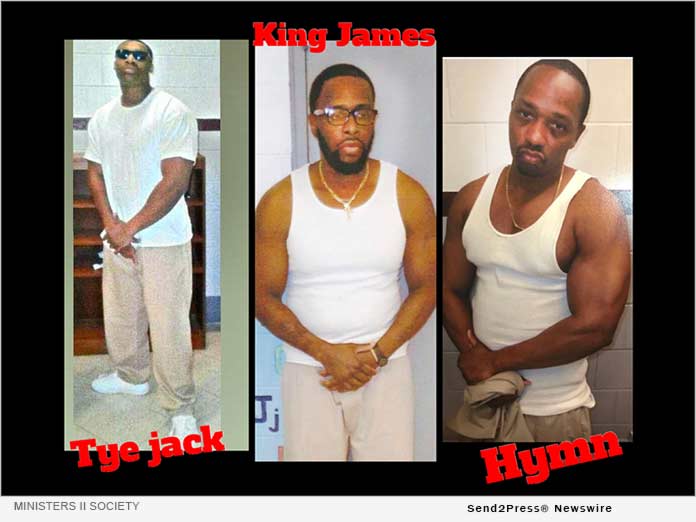 (TRENTON, N.J.) — NEWS: Ministers II Society is a Community Activist organization and Music group, that was formed by inmates in a maximum security prison. Their Name creates a certain culture lure, as does their unified goal of transforming themselves from “Murderers to Ministers.”

Its founding members are all serving time for unrelated, violent offenses. James Comer. “King James,” Shakeil Price “HYMN,” Tyrell Jackson “Tye Jack” are not just glued to a bond that focuses on uplifting the youth around the nation, but they are maintaining this bond as wards of the notorious New Jersey State Prison.

When asked about the venture, Tye Jack stated, “We felt, as the evidence shows, that parents of black and brown children have been crippled by unemployment at a disproportionate rate during this current pandemic; actually, even before Covid-19 struck.” He focused on the rapid approach of the new school year, and the CDC’s uncertain guidelines about when and how schools should reopen for the kids.

Ministers II Society confounder HYMN is serving a life sentence for his role in a 2008 m. We reached out to Sha Bandzz for comment about his connection to the convicted felon. We also asked him about the overwhelming importance to give back to the youth of his community.

Sha Bandzz stated, “‘HYMN’ is on the inside, and he’s gonna be until the creator or the right people say otherwise. But, even from behind the wall, he’s showing people that the ‘street life’ ain’t what it’s cracked up to be. The effort that the Ministers II Society is putting forth is as noble as it gets. HYMN, specifically, has been inspiring me for as long as I can remember. Look around, look at what I’ve accomplished… all of it is because of what he’s given back to me. People know him as Shakeil or SHAK’ ‘HYMN,’ but I just know him as dad.”

Sha Bandzz Further said, “Everybody gives something back to their communities in their own way, but what they’re giving isn’t always good. The Ministers II Society are not only showing me how to give back, but they’re also showing the importance of why I should give back. And there is no better place to start than to make sure that all children, including the ones that look like me, have the tools they need to stay in school.”

The three co-founders faced initial criticism when asked if they forum was just a means for them to possibly regain their freedom.

“Besides the wrongfully convicted, only a desperately dumb person comes to prison,” stated cofounder James Comer, “and only a dumber person wants to stay in prison. Of course, we look at this as a means to better our ‘incarceration situation.’ However, we’ve accepted our former roles as criminals along with the punishment that came with it. But now it’s time to accept our new roles as self-appointed ministers.”

HYMN felt compelled to say, “If these bars and walls remain all there is to our lives, then so be it..at least we did something for young people that will help them avoid coming to places like New Jersey State Prison. Can you imagine if the bars and walls were removed?”

For full interviews with the Ministers II Society, visit: https://ministersiisociety.com — his website serves as the hub where items in support of the activist/ Music group can be purchased. Portions of the proceeds are immediately directed towards their philanthropic work. The Group also accepts donations and is looking for sponsors to assists with their humanitarian endeavors.

To support the movement, hear the latest music or read and engage in their blog of hot topics, log on to https://ministersiisociety.com today.