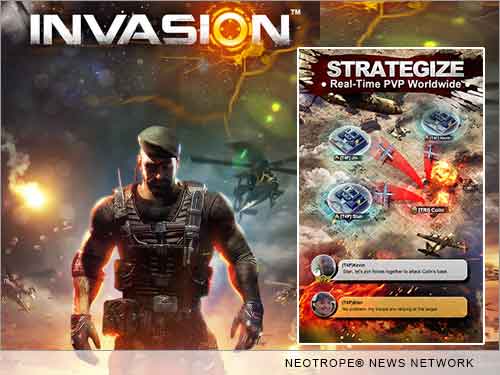 Since then they have added a half-dozen additional strategy games to their collection; but their most recent game is also probably the most exciting.

“Invasion” belongs to the genre of strategic games, however it’s very different from those you have played before; though like other strategy games, you will be asked to establish and develop a base and partner with allies to face off against online opponents.

However, “Invasion” offers a fun and interesting new twist: territorial control, where you will expand your borders and steal territory from opponents while protecting your own homeland from the adversaries that surround you. Beta test players of the game found this to be a meaningfully new game play mechanic that makes the game “feel fresh and different.”

And there’s more! If you’re used to other strategy games, you will be pleasantly surprised because “Invasion” is fully-rendered in 3D and looks amazing; from the realistic depiction of your headquarters in the American Southwest to the interactive battle sequences that take place in the desert. There is a remarkable level of depth and complexity within the game, from the hundreds of upgrades that you can complete in your base to the tech tree which is slowly unlocked as you advance from a small base into a sprawling fortress.

According to Luxi Zhang of Tap4Fun, “If you are fascinated by strategy games, and you are looking for something more visually striking with some fresh gameplay mechanics, look no further: check out ‘Invasion’ on the App Store or Google Play.”

Better Topics is a new card game for couples and families stuck at home during pandemic Jun 11, 2020

Now in print, 'Money Is an Energy Game' by Madeline Gerwick and Margaret Donahue Jul 1, 2020

New book from business coach and author Khigh Shotwell - The Game is to be Sold, Not Told Jun 17, 2020