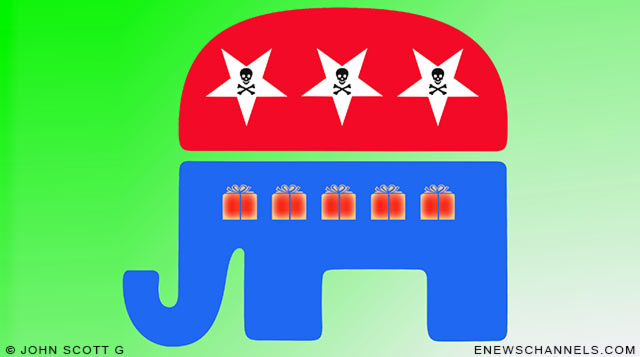 Ho, ho, ho, and a very merry non-denominational celebration of Saturnalia to you! (Note: the traditional name of the giftageddon that takes place during the winter solstice has been changed to reflect the author’s self-proclaimed status as an honorary colonel in the War on Christmas.)

‘Tis the season for buying a ton of shiny stuff, wrapping all of it in the brightly-colored byproduct of pulped trees, and exchanging the parcels with people who have grudgingly done the same thing for you.

This exercise in rampant consumerism is stupid and annoying. It’s also has no point aside from assuring the growth of landfills everywhere.

That being said, there are some gift items that should be delivered because they might improve the lives of idiotic celebrities and despicable political figures. Well, truth be told, these gifts will actually do more to help all of the rest of us.

The list of human detritus and their recommended gifts is as follows:

Bristol Palin — A package of condoms.

Ted Cruz — A new career as spokesperson for ISISIA (ISIS In America), one of the fastest-growing affiliates of the Republican Party.

Donald Trump — A copy of “Logic for Dummies.”

Mitch McConnell — A defense lawyer for when he finally is put on trial for treason.

Trey Gowdy — A visit to a barbershop.

Mel Gibson — Ticket to the Museum of Tolerance.

Tom Brady — A prescription for Zovirax.

Kevin McCarthy — A copy of “Vocabulary for Dummies” to help him in writing his autobiography, “Speakerfying for a Brightest America Shiningly on a Hillslope.”

Paul Ryan — A copy of “Math for Dummies” and a calculator.

Steve King — A couple of cantaloupes.

Black Republicans — A copy of “Between the World and Me” by Ta-Nehisi Coates.

Female Republicans — A cup of tea, some chocolate, and a soothing voice assuring you that it’s time to stop loathing yourself.

John Boehner — We have a lovely parting gift for you, oh orange one: the home board game version of The House of Reprehensibles. It’s a little like Monopoly but you just sit back while all the money disappears without anything happening.

Louie Gohmert — A whittling kit. (He’ll be distracted for a while as he figures out how it works; once he starts to play with it, he’ll cut himself and bleed to death.)

And so I say unto you: Merry Christmas, everybody!

VIDEO of Pamela Meyer’s TED Talk, “How to Spot a Liar” —